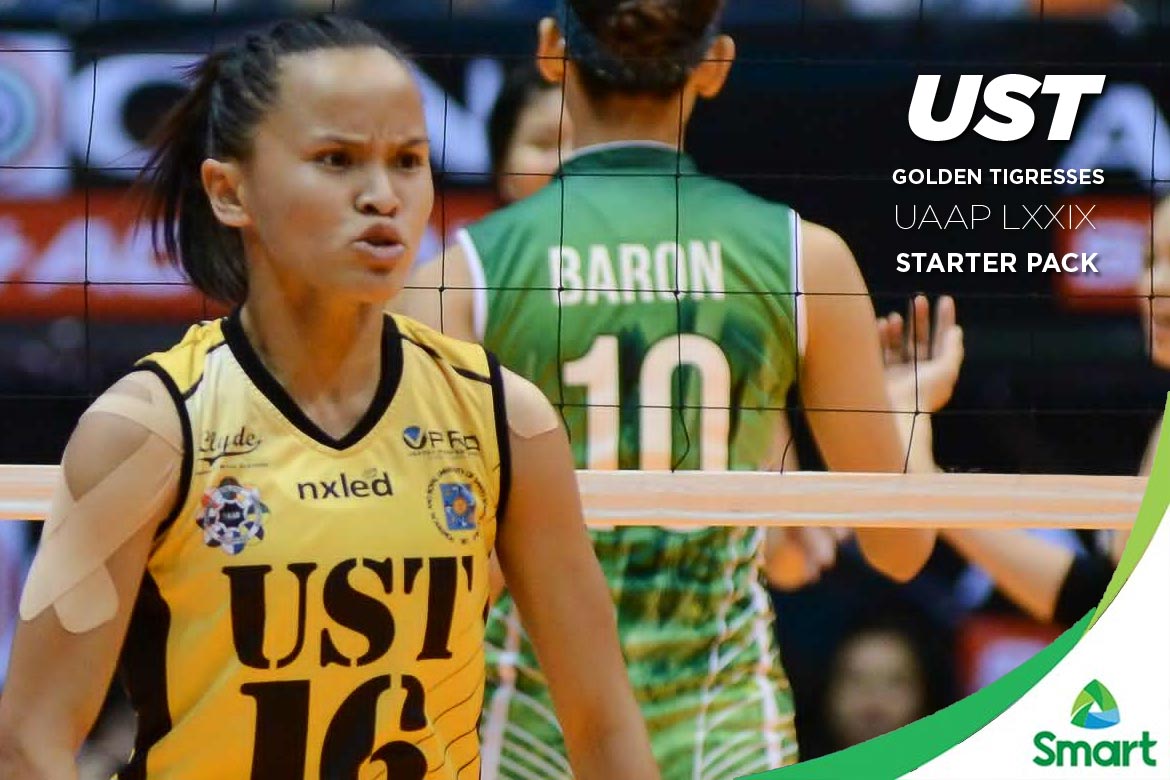 FOR the past seasons, the University of Santo Tomas Golden Tigresses had always been tipped as a Final Four contender — arguably more because of their reputation rather than their actual roster strength.

Having last won the title in Season 72 with greats like Aiza Maizo, Angeli Tabaquero, and Rhea Dimculangan in tow, it seems that UST were, and still are celebrated for their past accomplishments.

The Tomasinas last stepped foot in the Final Four in Season 74. Every year since then, UST have fluttered further down standings, ending Season 78 in sixth place.

Season 79 is seen as a renaissance for the UAAP, with a handful of other teams’ pillar superstars exhausting their playing eligibility. The Tigresses also lost key veterans in Carmela Tunay and Jessey De Leon.

However, the proud program is in the best position it has been since Season 74 to make a return trip to the Final Four.

UST’s rebuild began when they brought up Kungfu Reyes from the Juniors program to also call the shots for the Seniors. The Army veteran not only brought his stern hand and strict command, but he also entrusted the younger players with expanded roles.

He made then-sophomore Ej Laure team captain after Pam Lastimosa tore her ACL and missed the entire Season 78. Cherry Rondina was also lifted from the bench purgatory she had been put in during her rookie year and started all of UST’s games. Reyes also managed to swing valuable playing time for Rica Rivera and rookies Tin Francisco and Alina Bicar.

During their stumble, the Tigresses found their weaknesses and, most importantly, the young Tigresses got to play.

UST showed their might in the off-season, winning the University Games title, in which they throttled defending UAAP champions De La Salle University in the semifinals, and turning heads against the import-fueled clubs of the Shakey’s V-League Reinforced Conference.

When visiting one of UST’s practices, the Tigresses exude confidence while maintaining a focused tone. Everyone has fun but also pushes each other to the limit.

Perhaps much of UST’s confidence comes from new team captain, Rondina. The third-year Cebuana spiker made a name for herself last season. When UST were going through a rough stretch last season, Reyes famously declared that if he had six Sisi Rondinas on the team, they might have won more games.

To her credit, Rondina has an infectious personality. More than her leaping ability or cat-like quickness, Rondina has a Westbrook-ian approach to volleyball — a sort of controlled fury that she funnels in her ever twitch and jump.

READ  Red Spikers bounce back with win over Stags

Rondina, however, does not have Westbrook’s hubris.

Her teammates, however, confirm Rondina’s effectiveness.

Overall, Rondina leads one of the deepest UST rosters in recent memory, as they have several solid options off the bench if a starter is having a bad day. But the Tigresses are bent on consistently having good starts.

Last season saw too many mid-game lineup shuffles from the Tigresses, as is the norm for struggling teams.

But in their Philippine V-League Reinforced conference stint, the Tigresses developed a solid rotation once Sisi Rondina came back from another championship run in the UAAP Beach Volleyball Tournament. The Rondina and Laure open hitter pairing provided a steady stream of points, while Pam Lastimosa got better every game. Meneses put up career numbers, and Shanen Palec firmly grasped of the other middle blocker spot.

UST’s season may very well come down to the two non-scoring positions: libero and setter. Pat Rasmo toiled in Team B for most of 2016 and shone in the Reinforced Conference. The Tigresses, however, still shifted between veteran Alex Cabanos and incoming sophomore Alina Bicar at setter.

Reyes is confident Cabanos can fill the starting role dutifully, given that this is her final playing year.

When UAAP volleyball was just first gathering mainstream steam, UST had been the fan favorite. Years of ineptitude and disappointing recruiting turnouts have nibbled at their fanbase, leaving only the most loyal and hungry of fans.

Usually, teams tell their fanbases not to expect a win every game — to just trust the team is doing is best.

But Season 79 feels special for UST.