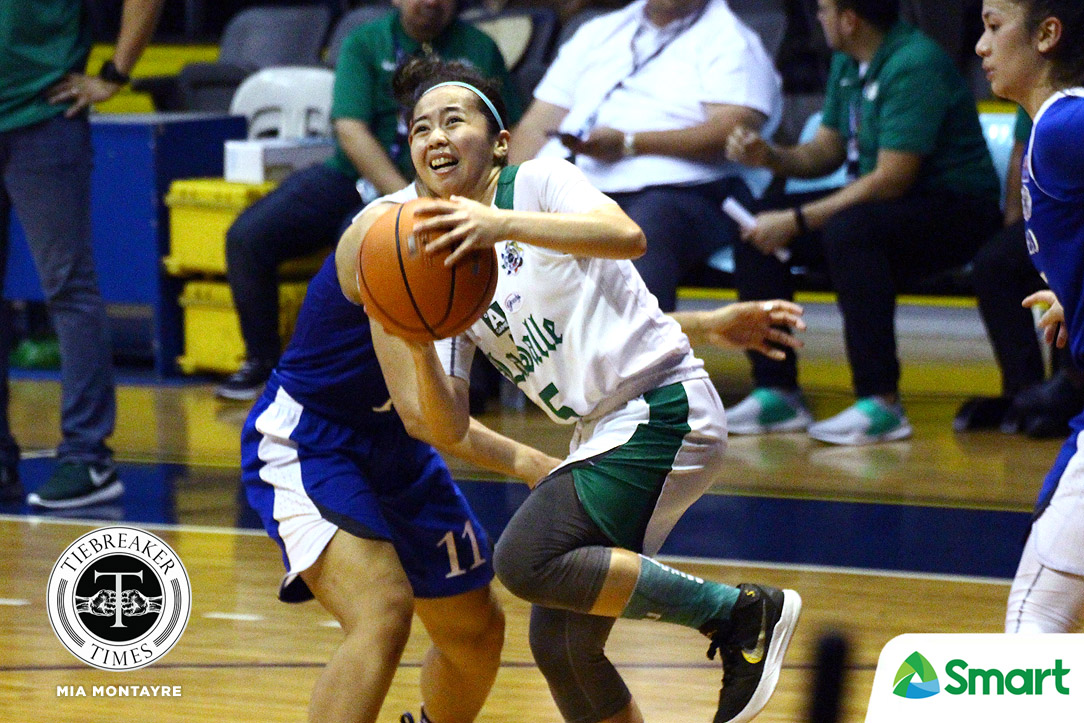 Stuck in a logjam in third place, the De La Salle University Lady Archers made sure that they controlled their own fate, embarrassing the Ateneo de Manila University Lady Eagles on their home floor, 57-39, Tuesday afternoon in Quezon City.

It was an all-important victory for the Lady Archers, as they got a jumpstart in the UAAP Season 81 Women’s Basketball Final Four race. La Salle’s victory lifted them to an 8-5 record – half-a-game ahead of the Adamson Lady Falcons and the UST Growling Tigresses. The two squads are slated to play today as well.

“We want to control our own destiny,” pointed out Lady Archers head coach Cholo Villanueva. “We are not looking at any scenarios, just winning the games that we need to win so we can control our fate.”

In cruise control for the entire first half, the Lady Archers figured in a nip-and-tuck third canto that saw Alyssa Villamor will the Lady Eagles back into the game. Villamor’s eight-point third frame sliced a once-13 point lead down to just four entering the final stanza.

The Lady Archers then found their extra gear just in time.

La Salle’s defense paved the way for a crushing 17-2 spurt in the last 10 minutes of the game. Leading the team on offense were the backcourt duo of Camille Claro and Khate Castillo, while Bettina Binaohan and Angel Quingco provided the added spunk.

“I’m very happy with it. That’s our team’s identity – limiting our opponents to low scores,” Villanueva said about La Salle’s stifling final frame. “We are not a very talented team, that is why we need to grind it out every game and every possession.”

READ  Frustrated Brandon Brown on Phoenix's skid: 'This is new to me'

“I think it’s a good thing for us to win this game this way so that we can sustain our momentum in our final game,” added Villanueva, as they are entering their final game of the round armed with a three-game winning streak. “It’s different with this group e. If we keep on playing, the confidence keeps going up. Hopefully, we sustain it.”

Villamor and Mellissa Newsome were the sole bright spots for the also-ran Lady Eagles, who lost their third straight game and dropped to 4-9. Villamor had 11 markers, while Newsome added eight points on 4-of-4 shooting to goalong with six rebounds, two assists, and a steal.

Ateneo scoring leaders Katrina Guytingco, Jollina Go, and Jhazmin Joson struggled for the game. Guytingco had just two points on 1-of-11 shooting while Go and Joson combined to shoot just 1-of-10 from the field.

La Salle will look to pass one more test when they face the UST Growling Tigresses on Friday, November 16, at the Filoil Flying V Centre. Ateneo, on the other hand, hope to end their season on a high note as they try to stun the Adamson Lady Falcons on the same day.