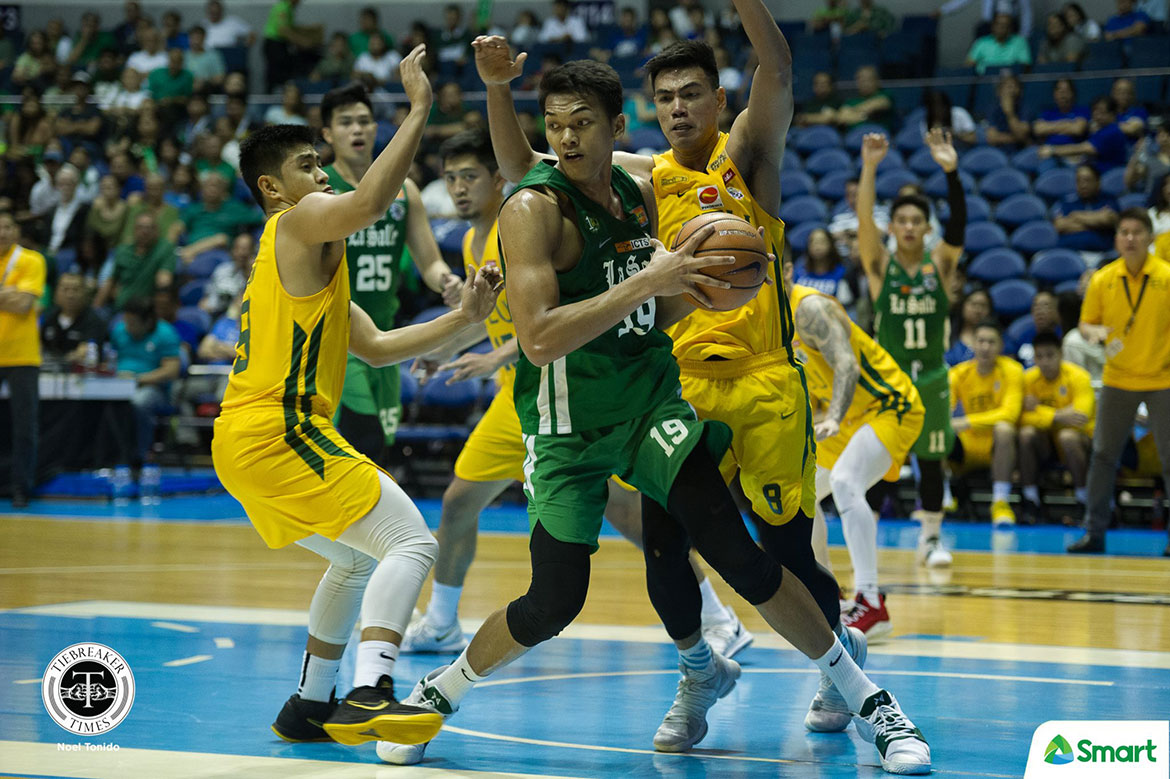 Coming off a heartbreaking 50-57 overtime loss to the Adamson Soaring Falcons a week ago, the De La Salle University Green Archers unleashed a little bit of mayhem on the skidding Far Eastern University Tamaraws, eking out a 65-57 victory, Saturday evening at the SMART Araneta Coliseum.

The Green Archers go up to a 6-4 record, while giving the UP Fighting Maroons an assist as the FEU Tamaraws dropped to 5-6.

And it was because of the leadership of graduating Green Archer Kib Montalbo.

“Actually, I give credit to the seniors and my coaching staff for this game. Kib was trying to put everybody on the same page,” shared first-year Green Archers head coach Louie Gonzalez.

“Especially when they made that 10-0 run, dun lumabas yung leadership ni Kib. As a senior, alam niya napaka-importante ng laro na ito for the team and for him. A win tonight will be a big help to our campaign in making the Final Four,” he added.

Down 50-51 early in the final frame, the Green Archers zoned in on defense, allowing just one FEU field goal in a seven-minute stretch.

Andrei Caracut sparked the spurt with a layup, and was followed by steals from Aljun Melecio and Montalbo and swats by Brandon Bates and Santi Santillan. A three-pointer by Melecio with 1:15 left gave La Salle a 62-53 lead.

“Actually, this is what I really want from the start. Yung team na pinipicture ko is kahit sino sa mga players ko, makakatulong sa amin,” shared Gonzalez, as they dropped FEU to a four-game losing streak.

Justine Baltazar had 15 rebounds and six rebounds from off the bench duties. The towering duo of Santi Santillan and Brandon Bates finished with 12 points and 14 rebounds, and seven points and 10 rebounds respectively. Bates had two blocks as well.

“This is Brandon’s night. I spoke to him before the game that with the game is playing, he has to commend himself. This guy will do everything – not just for scoring but to win the game,” beamed Gonzalez about the Filipino-Australian rookie.

Arvin Tolentino, who was coming off a two-game suspension, was the sole double-digit scorer for FEU with 20 points.