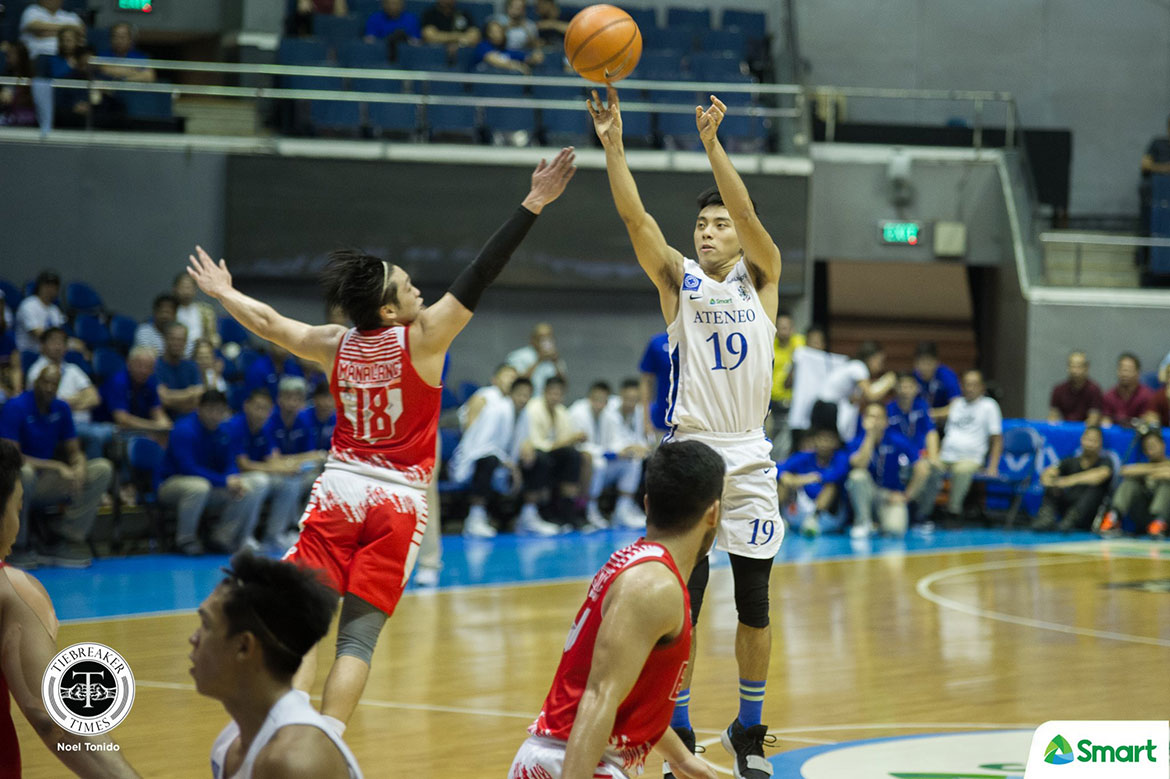 Defending champions Ateneo de Manila University Blue Eagles continued where they left off last Saturday, this time whitewashing the University of the East Red Warriors, 90-70, for their eighth win of the season, Wednesday afternoon at the SMART Araneta Coliseum.

With the win, the Blue Eagles are now 8-2 in the standings for solo first in the UAAP Season 81 Men’s Basketball Tournament. Moreover, Ateneo dropped UE to 1-9, last in the eight-team race.

Though the Nieto twins missed their third straight game, Tyler Tio was able to fill in Matt’s shoes nicely once again, finishing with a career-high 16 points. His previous high was 14 points back in Ateneo’s 92-71 win over UP last September 13, 2017.

“We had a terrific first half both on offense and the defense. Third quarter, UE came out with a lot of fire. But that’s the character they have,” said Ateneo assistant coach Sandy Arespacochaga.

Coming off an 82-62 rout of the FEU Tamaraws, Angelo Kouame and the Blue Eagles wasted no time blasting the Red Warriors.

Kouame, who had 32 points and 27 rebounds against the Tamaraws, already had 14 points and 13 rebounds in the first half to power the Blue Eagles, who led by as much as 33 points in the game.

The Ivorian student-athlete finished with 18 points and 16 rebounds.

UE showed semblance of resistance in the third canto, going on a 15-3 run to start the second half. But Tio and Thirdy Ravena were able to restore order to close out the game.

“Good thing we had a good cushion. There’s still a lot of work to be done but we have are generally happy with the win,” added Arespacochaga.

Ravena, who was coming back from a one-game suspension, chipped in 10 points, five rebounds, and four assists while Raffy Verano added 14 points.

Alvin Pasaol and Philip Manalang were the sole bright spots in UE’s loss. Pasaol had 29 points and 14 rebounds, while Manalang added all-around numbers of 18 points, seven assists, and six rebounds.

Ateneo look to extend their streak when they face the National University Bulldogs on Saturday, October 27, at the SMART-Araneta Coliseum. UE, on the other hand, take on the University of Santo Tomas Growling Tigers on Sunday, October 28 at the Filoil Flying V Centre.