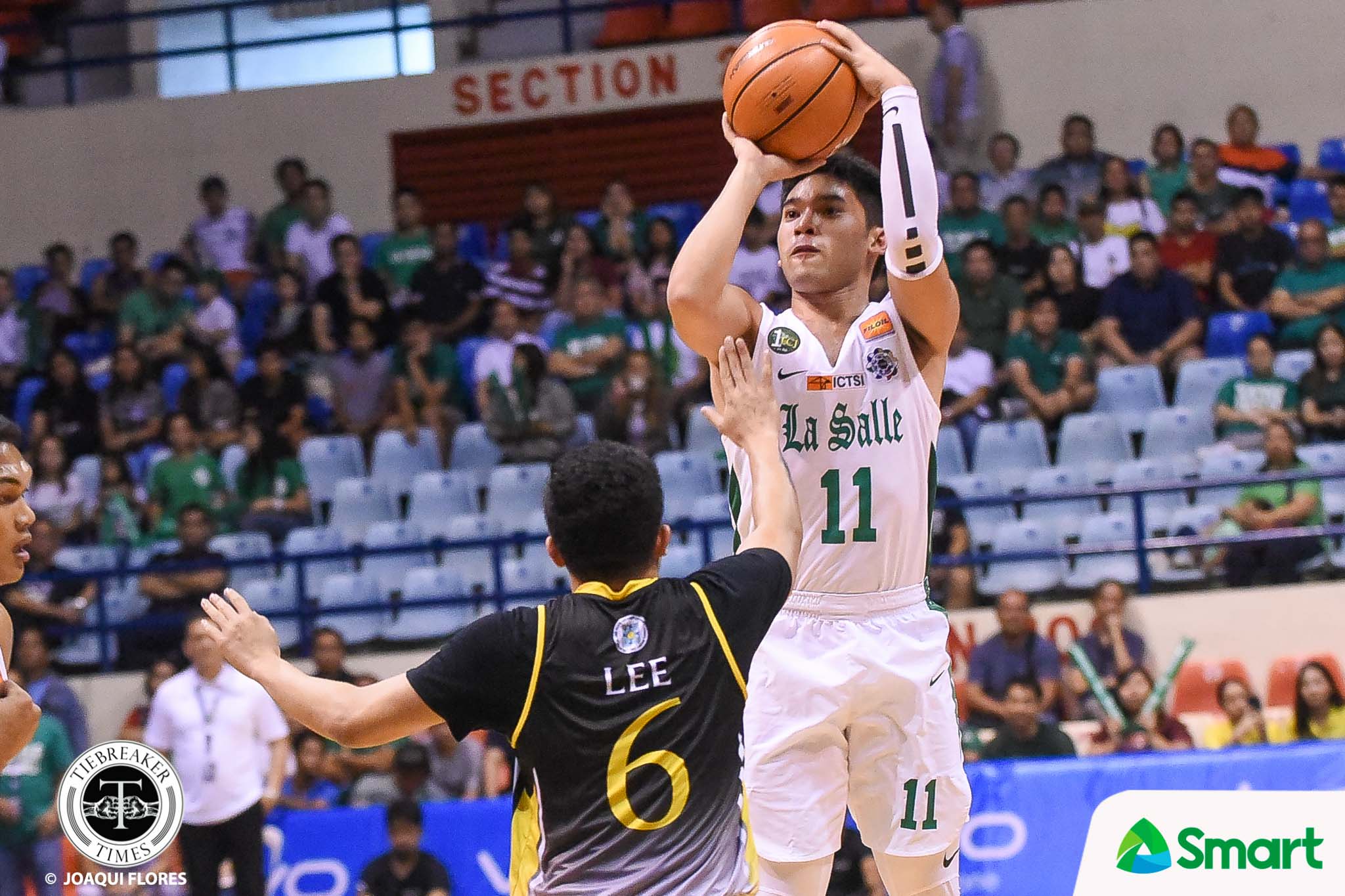 Closing in on a Final Four slot, the De La Salle University Green Archers upstaged their first round encounter against the University of Santo Tomas Growling Tigers, picking up a 110-69 rout, Saturday afternoon at the Ynares Center in Antipolo City.

This is the worst blowout of the season;; the previous-worst was UST’s 53-85 loss to the Ateneo Blue Eagles last September 29. Moreover, this was the worst loss in the three-year career of Aldin Ayo.

UST have yet to beat La Salle in six outings.

It was a pivotal win for the Green Archers as they raised their record to 7-4 – one away from clinching a playoff berth. Moreover, they also dropped the Growling Tigers down to 5-6, pushing them to a triple tie with the FEU Tamaraws and the UP Fighting Maroons.

Just like their meeting last October 3 that saw La Salle come out with a 99-72 triumph, the Green Archers started the game with a blitz, finishing the opening stanza with a 29-13 lead – a point higher than their first quarter finish in round one.

But that was just the start of the show for Aljun Melecio and Justine Baltazar.

Melecio, who scored 19 points during their first round encounter, finished with 22 points. The third-year combo guard had already tallied 19 markers with 1:03 left in the third canto. For his part, Baltazar, who had a career-high 22 points against UST, notched 13 points and six rebounds – including two highlight dunks.

The game was practically over in the third frame, as La Salle went on a 20-0 run. The Green Archers would lead by as much as 48 points, 90-42, after a three-pointer by Mark Dyke with 9:11 left in the game.

Dyke, who has just returned to La Salle this season, notched his personal-best 16 points in the game to go along with six rebounds in just 17 minutes of action.

With 3:38 left in the game, La Salle became the first team this season to breach the 100-point mark.

Besides the trio, three other Archers scored in double-figures, with Andrei Caracut finishing with 15 points, Jollo Go adding 13 markers, and Encho Serrano chipping in 13 markers.

La Salle only had 12 errors in the game while dishing out 21 dimes. UST, on the other hand, were forced to commit nine of their 23 turnovers in the first quarter alone.

There was a scary moment for La Salle as team captain Kib Montalbo was kneed by Germy Mahinay on his right knee with 7:03 remaining in the first half. He did not return to the game.

Marvin Lee led UST with 26 points while CJ Cansino – who had a triple-double last weekend – had 14 points and nine rebounds. Renzo Subido returned to action after a one-game absence, but was held scoreless in 18 minutes of game time.

La Salle look to string together three straight wins when they face the National University Bulldogs on Wednesday, November 7, at the SMART Araneta Coliseum. On the other hand, UST hope to bounce back when they take on the Adamson University Soaring Falcons earlier in the day.