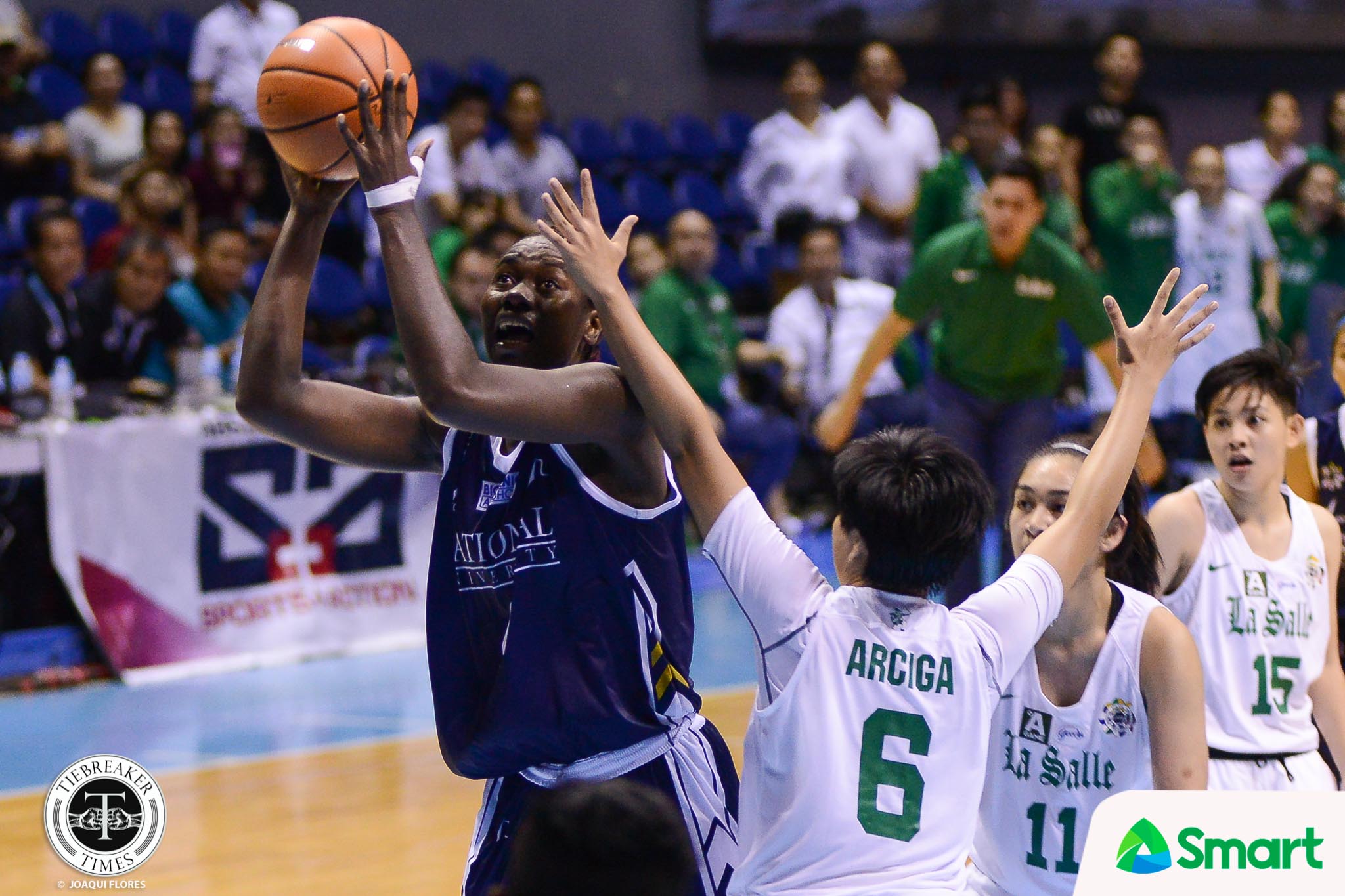 This was a landmark result not only for NU, but also for the UAAP, as it was the Lady Bulldogs’ 50th consecutive win in the competition, a streak which spans four seasons and three straight championships.

“I never expected in my entire coaching career that I’ll get 50 straight wins. Again, I’ll downplay it. I just told my girls not to think about it. What I just tried to tell them is that this is a new season. Let’s take it one game at a time. We’re now 2-0,” commented NU mentor Pat Aquino.

The defending champions started the contest on a positive note. Lady Bulldogs center Itesi powered past the Lady Archers defense to give National U a 28-12 separation early in the second period.

La Salle, though, did not buckle down, and let loose with a 5-13 run capped off by Angelika Figueroa’s free throws to cut the deficit to 25-33 at halftime.

Come the third quarter, NU went on a rampage. Two consecutive treys by Trixie Antiquera ignited a 16-4 run to make it 49-29 midway through the period. Soon afterwards, Animam gave NU their biggest lead at 55-29 as the quarter ended 55-35 in favor of the Lady Bulldogs.

“I told them just to relax. We were not doing the right type of decision making we’re supposed to do on the floor. Sumasabay kami sa tempo ng La Salle which is not our forte,” explained Aquino.

Similar to the second quarter, La Salle tried to retaliate early in the final period. A 14-4 run concluded by Figueroa’s basket made it 49-59 with half a period to go.

With the threat of the retaliation turning into a possible comeback, the Lady Bulldogs countered the Lady Archers with a 13-2 sequence started by Animam and Nabalan that sealed the contest at 72-49.

NU ultimately won 77-56 against La Salle in a demonstration of force that showed that a fourth straight championship is not out of the question for the Lady Bulldogs.

The Lady Bulldogs were just too strong for the Lady Archers. NU shot 44.26 percent from the field against La Salle’s 26.56 percent and also had 56 rebounds versus the latter’s 34. Inside points were a big plus, as NU produced 36 compared to La Salle’s 18.

“One factor is defense. We try to be disciplined enough para mga fouls won’t be given and siguro some factor is they settled down,” concluded the multi-titled mentor.

Both schools’ next games shall be held at SM Mall of Asia Arena on September 20. NU (2-0) face the University of Santo Tomas Growling Tigresses at 10:00 AM, while La Salle (0-2) will play the Adamson University Lady Falcons earlier at 8:00 AM.