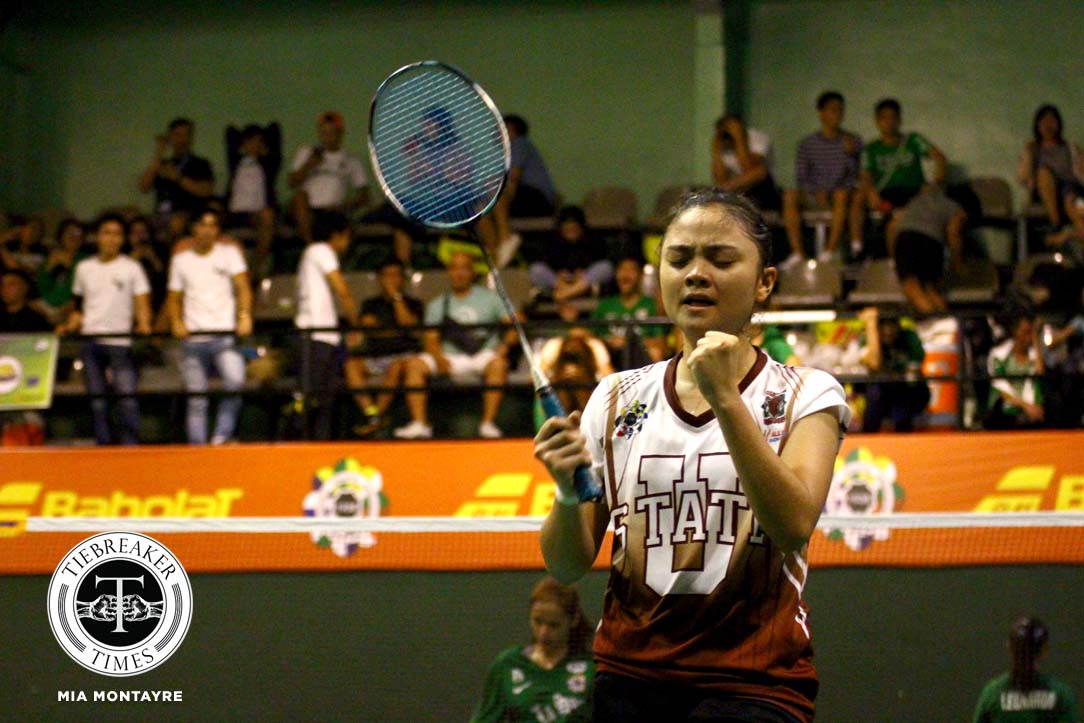 As they say, the road to another title defense just gets tougher as the reign gets longer. Nonetheless, for the reigning UAAP women’s badminton champions University of the Philippines, it just takes determination and grit to pull through the day.

And that encapsulates the Fighting Maroons’ story on Saturday morning to ward off the feisty De La Salle University Lady Shuttlers, taking the match by the minimum 3-2 score line to start their four-peat bid on a winning note.

The day started difficult, as even the reigning Most Valuable Player Poca Alcala had to grind it out against Arianne Rivera in the first singles match.

The former UP co-skipper admitted, “Ang sama ng laro ko. Parang yung first game ko ngayon parang [katulad] nung last year.” However, with her teammates and the crowd behind her, cheering her on, the former top singles player in the country pocketed the win in three frames, 21-18, 17-21, 21-13.

Returning La Salle stalwart and national team member Nicole Albo then leveled the tie after easily taking care of UAAP Season 77 Rookie of the Year Ann Maranon. The second-year player finished the match at 21-10, 21-15. It was a marvel to watch, as the returning Albo glided on the court with quick transitions and masterful hits.

That, however, was the last hurrah for the side from the nearby school.

The Maroons, who put premium on their doubles pairs, were sluggish in few portions of the two matches. Alcala, however, believed that what would work is, “Yung determination and desire talaga namin na manalo. It was tough for the both teams, pero we just wanted to take this one.”

This desire delivered as Alcala, beside constant partner UAAP 77 MVP Jessie Francisco, overcame shaky moments to eventually regain the advantage for UP after winning against Iyah Sevilla and Lindsay Tercias in the first doubles match at 21-17, 21-12.

The following doubles match was a slugfest, as both Maranon and UAAP 79 ROY Lea Inlayo of UP, and Albo and Isay Leonardo of La Salle, unleashed their full arsenal throughout the match. The Maroons took the first set at 22-20, before the Lady Shuttlers from Taft Avenue equalized with a similarly close 21-19 win.

The third game boiled down to end-game execution and chemistry, which — fortunately for the reigning queens — was in favor of the two former top rookies. Inlayo and Maranon finished the game and clinched the opening win at 23-21.

Inlayo battled fatigue in the dead singles match, but eventually cramped and was forced to retire with Sevilla leading the first game at 19-18. The match was then awarded in favor of La Salle, 21-18, 21-0.

Nonetheless, the win still went to State U.

The 1-0 Fighting Maroons will try to do a much better job as they face the lowly University of Santo Tomas Tigresses (0-2) on Sunday, September 24 at 1pm. La Salle (1-1) will return to action against that same team on Friday, September 29, also at 1pm.

Frustrated LA Tenorio surrenders: ‘The top four is not in our control’