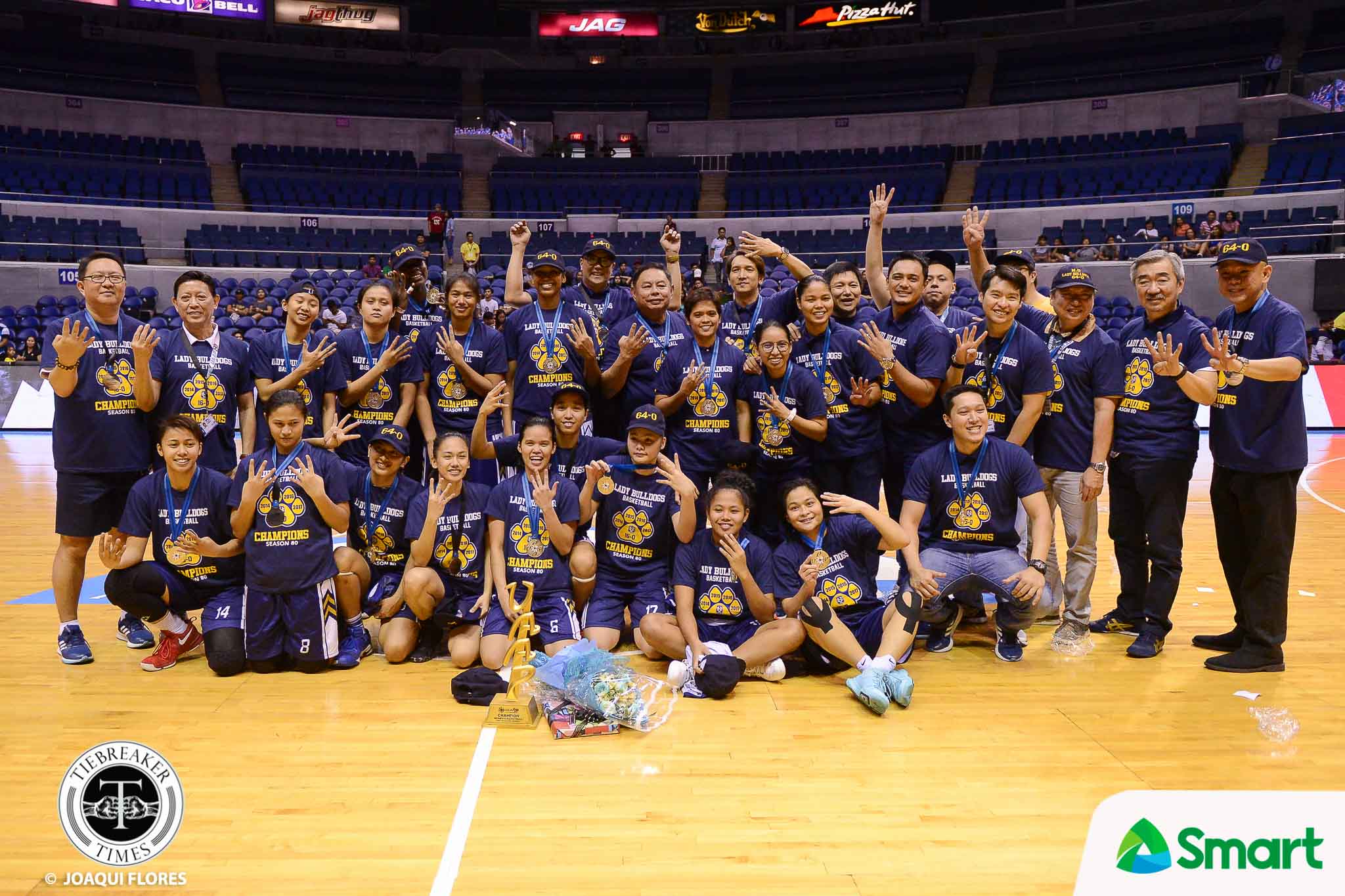 Figuring in one of their toughest games of the season, the National University Lady Bulldogs showed the heart of a champion, surviving a tough challenge from the University of the East Lady Warriors, 79-68, to win the UAAP Season 80 Women’s Basketball Championship, Sunday afternoon at the SMART-Araneta Coliseum.

Besides winning the championship, the Lady Bulldogs have swept their fourth straight season, extending their winning streak to 64 games.

The streak had been in danger for most of the game, as the Lady Warriors led by as much as 12 points in the first half, nine points in the third frame, 52-43.

“Ang sabi ko lang sa kanila, they need to execute. At times kasi, they tend to play one-on-one. They need to play as a team and get back on defense,” recalled Aquino during the time the Lady Bulldogs were trailing.

Pint-sized guard Ruthlaine Tacula tried to will the Lady Warriors all by herself. A three-point play by the fourth-year guard, followed by a beautiful floater with 2:33 remaining, sliced the NU lead to just two, 66-68. However, after hitting the floater, the back of Tacula’s head hit the knee of Eunique Chan.

Tacula, who was able to return to the game with 1:54 left, ended her collegiate career with a game-high 25 points to go along with 12 rebounds.

Itesi was able to score a quick bucket on the other end, while in the next play, she drew Chan’s fifth foul. Janet Sison — who played in her final game — then put the icing on the cake, scoring seven straight points to seal the win.

“Thank you and again I’m so happy with the girls. They never let down. Lumalaban sila until the end of the game. Just proud of these girls right here and everybody forom the coaching staff, management and bosses,” reflected Aquino.

Graduating senior Trixie Antiqiuera capped her UAAP career with 19 points, spiked by six triples. Ria Nabalan added 14 points but needed 19 attempts. She was named as the Finals Most Valuable Player, as she averaged 24.5 points on 65 percent shooting. Cherry Ano-os also played in her final game.

Eunique Chan and Love Sto. Domingo ended their stellar UAAP careers in the game. Chan had 19 points on 7-of-12 shooting, but Sto. Domingo was limited to just five points on 2-of-8 shooting.