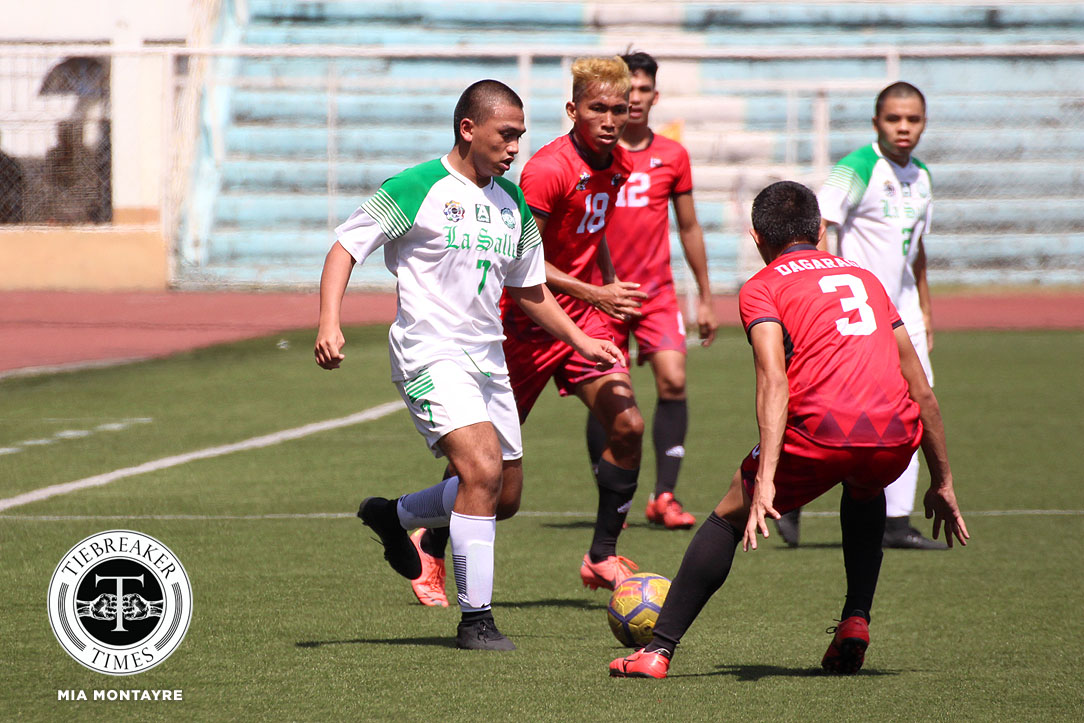 Showing the heart and attitude that Hans Smit was looking for since last season, the De La Salle University Green Archers recorded their second comeback win and third overall of UAAP Season 80 following their 3-2 victory against the University of the East Red Warriors, Thursday morning at the Rizal Memorial Stadium.

Paolo Perez provided the decisive goal early in the second half. Coming on as a first half substitute, the rookie from La Salle Green Hills kept his composure in the 49th minute to punish the Red Warriors, who had given the ball away inside their own box rather cheaply to the Green Archers.

The goal sealed La Salle’s third win of the season, keeping pace with joint league leaders UST Tiger Booters and UP Fighting Maroons, whom they trail now by just a solitary point in the standings.

The first 30 minutes didn’t see a lot of chances, but the last 15 minutes of the opening half made up for it.

La Salle opened the scoring a minute after the half-hour mark through Jed Diamante. The midfielder found an opening on the right side of the 18-yard box, before coolly slotting the ball beyond UE custodian Frank Rieza.

The Red Warriors didn’t take long to respond, as a La Salle defensive lapse allowed Regil Galaura to feed Mar Diano just outside the box in the 38th minute. The UE forward then picked his spot just in time, beating the on rushing DLSU keeper Paeng de Guzman.

The Red Warriors weren’t content with simply levelling the scores, as they grabbed another one a minute later. Galaura rounded off a well-orchestrated UE attack to stun the Green Archers.

Unfortunately for UE, they couldn’t take the lead into the break. Lawless guided a corner kick into the goal to restore parity in the first added minute of the opening half. It stayed that way when the referee blew the halftime whistle, setting up an exciting second half between the two sides.

Smit was glad with the late first half equalizer, expressing his confidence with the team after the match. “I was thinking that if we scored before halftime, I had a big feeling we would win the game. The chances that we had were much more than UE – we just gotta finish,” he recalled.

His players did not let their coach down.

Pouncing on the lax Red Warriors defense, Lawless hustled his way to win a loose ball inside the UE penalty box. Aware of the situation, the substitute helped his teammate to gain possession in a dangerous area. Once Perez accomplished that, he then kept his composure just around the six-yard box, giving his team a lead they held onto.

It came as a big blow to the Red Warriors, who could have taken the lead instead a minute before Perez’s goal. Diano missed a header from close range with the next passage of play leading to the decisive moment of the match.

The rest of the second half looked stale, as chances came few and far in between. Diano and Mathew Custodio spearheaded their respective team’s lines yet neither was clinical in finding the back of the net. Come full time, the Green Archers bagged all three points.

Smit was delighted with both the performance and the result, heaping praise on his team’s excellent attitude throughout the season.

“Like I said in previous games even after the loss, they showed something that’s much different which is what I want [and] which I like now,” the veteran mentor pointed out.

Up next for DLSU is a tough assignment against an unbeaten University of Santo Tomas on Sunday afternoon at FEU-Diliman. The Red Warriors, meanwhile, have a chance to redeem themselves when they play against the Ateneo de Manila University on Sunday morning at the same venue.