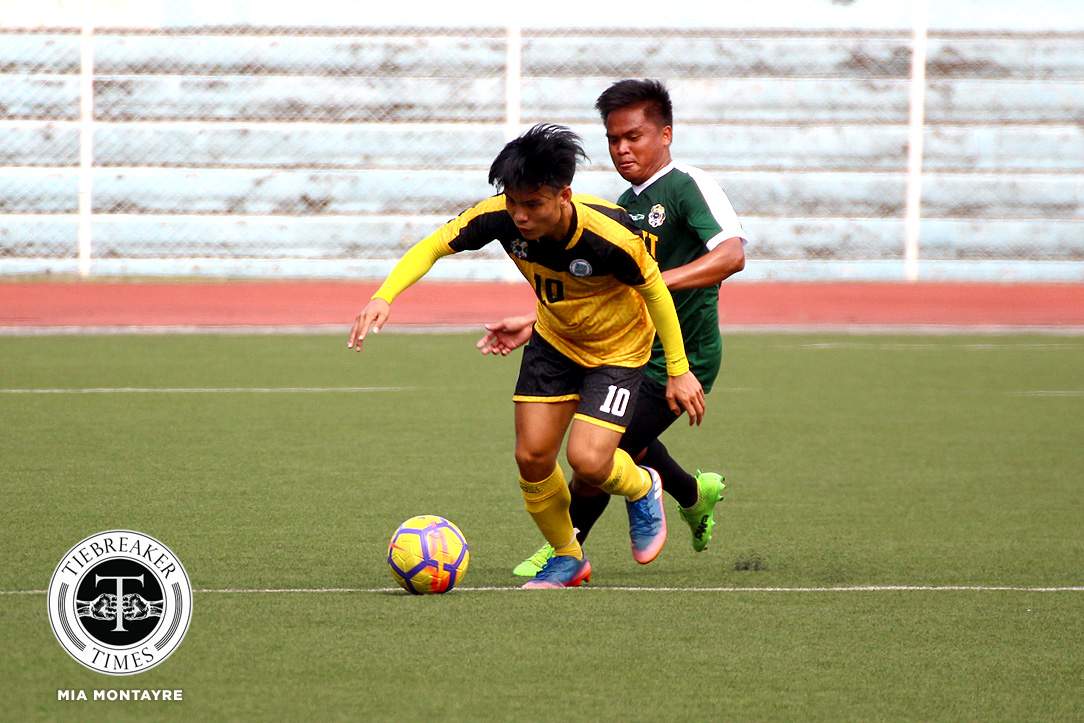 Marvin Bricenio probably never imagined how great his first game of the season would be like.

The veteran forward scored thrice as he and the rest of the University of Santo Tomas Golden Booters enjoyed a 4-0 victory over the Far Eastern University Tamaraws to begin their UAAP Season 80 Men’s Football Tournament campaign with a bang.

The Golden Booters started the contest in the best way possible when Marvin Bricenio latched on a through ball and shot past Tamaraws goalkeeper Ray Joyel, to give UST the lead after just seven minutes of play.

Goals add confidence to a team, and Allado’s men controlled the proceedings in search for an early killer blow. Renz Gumban tried his luck twice, only to see his first effort go wide and his next attempt caught by Joyel.

At the other end, FEU belatedly got into the game and threatened Abraham’s goal, but Jason Lofranco’s and Rico Andes’ freekick proved too tame for the veteran goalkeeper.

Halftime came and the España school was good value for its lead. On the other hand, FEU’s struggles continued, as the Tamaraws listed only 16 players for the whole competition.

Upon the game’s resumption, UST’s momentum surged while FEU fell further into turmoil, with three goals in 10 minutes from the Golden Booters. Bricenio capitalized on another through ball and struck past Joyel just seconds into the restart.

If the first two UST goals came from fine passing in the open play, then the next two were gifts from the FEU defense. Bricenio took advantage of Joyel’s high line and forced the latter into an error for his third goal in the 55th minute, while AJ Pasion got on the scoresheet a minute later thanks to a faulty backpass from FEU skipper Audie Menzi.

Mercifully for FEU, the referee blew his whistle to end the contest. UST were worthy 4-0 winners, and it was a good start for the squad looking to return to the promised land for the first time since the OJ Clarino era.

The two schools shall next play on February 8 at Rizal Memorial. UST shall look to build on their good start against the Adamson University at 9:00 AM, while FEU will look to redeem themselves versus the De La Salle University afterwards at 4:00 PM.