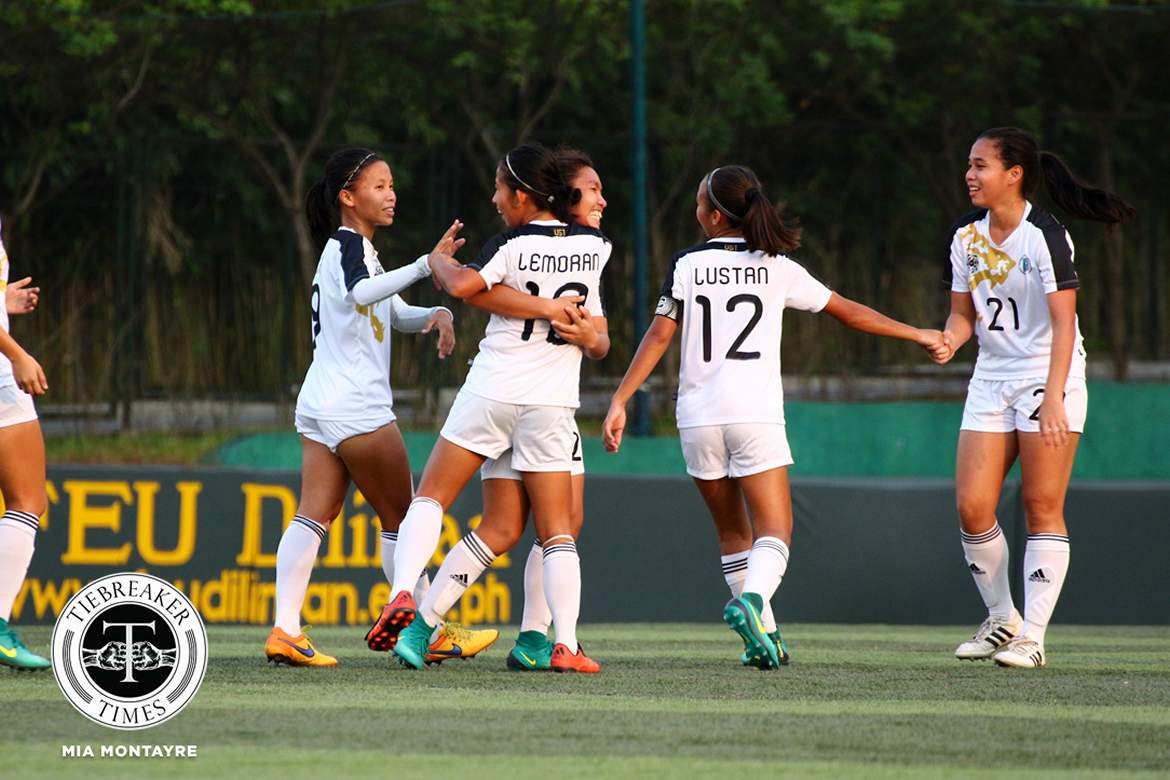 With the results at hand, the University of Santo Tomas Lady Booters are already assured of at least a page-system semifinals berth.

Nonetheless, it would not stop the España-based squad from turning up their attack as they outscored the Far Eastern University Lady Tamaraws, 4-2, Wednesday afternoon at the FEU-Diliman in Quezon City.

Reminiscent of their first round encounter, both teams pushed their attacks early on.

It was the Season 77 champions who drew first blood as Jean Kadil scored at the stroke of the half-hour after beating her defenders.

The lead turned out to be the last charge from the green-shirts as Bebe Lemoran scored twice to put UST up at the break.

Hazel Lustan sent a good pass to the striker, who finished it for the equalizer eight minutes after. The sophomore then doubled her tally for the day, converting from the spot after a handball call on FEU.

If it were the first round, the Tigresses would slowly tire out. However, this time, head coach Aging Rubio shared that the squad worked on their stamina.

This improved condition plucked two more goals in the second period as Thea Sumilang doubled the lead for UST five minutes after the hour mark.

With much pressure, the Lady Tamaras forced to concede a free kick from dangerous territory. Chelah Cadag then put the match out of reach after she scored at the 76th minute off a lovely taken free kick.

The former three-peat champions tried to rally back with much time left, but could only reply with a Suet Simoy goal four minutes left in regulation. This was not enough as the Tigresses marched on to take the full points.

The Tigresses (13 pts) will try to do just that when they face the undefeated Lady Archers (21 pts) on Sunday, April 23, at the same venue at 3:30pm. A draw will seal UST’s return to the UAAP Finals. If La Salle sweeps the eliminations, they go straight to Finals; leaving the second seeds to fight for the other berth with the winner of the earlier game. That first game will be between neighbors Ateneo de Manila University Lady Eagles (7 pts) and the defending champions University of the Philippines Lady Maroons (5 pts) at 1:30pm. For their part, the Lady Tamaraws ended their season with 5 pts.