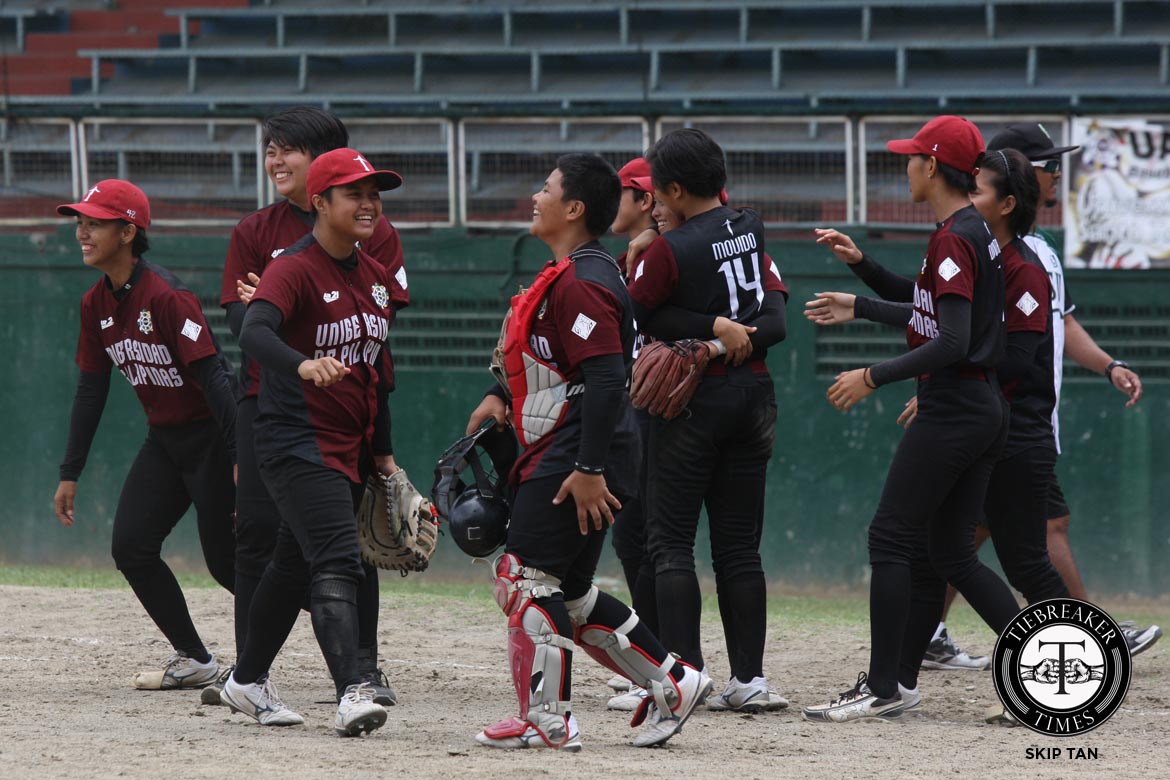 The University of the Philippines Lady Maroons needed to overcome one last hurdle to return to the Final Four for the third straight time. Standing in their way were the hungry De La Salle University Lady Batters, a team that has been outside looking in for the last two seasons.

The Lady Maroons had been on the receiving end of two routs during their regular season encounters, 6-1 in the first round and 9-1 in the next round.

“Gigil na kami because we didn’t want to lose to them for the third time,” said team captain Gelai Penales. “It’s like redemption; not for our ego but for our team. We knew that we deserve to be in the top four.”

With their season on the line, the Lady Maroons started off strong, connecting on 11 hits against La Salle ace Jamica Arribas en route to a 10-3 win to advance to the Final Four, Thursday morning at the historic Rizal Memorial Baseball Stadium in the city of Manila.

Leading UP’s stand was Swing dela Cruz. UP’s first basewoman went 3-of-4 at bat punching in three runs in her best game of the season.

Dela Cruz and the Lady Maroons immediately broke the game wide open in the second inning, as a combination of hits and La Salle errors gave UP an 8-0 lead. A double by Dela Cruz and a catching error by catcher Jen Gomez gave Jaz Movido base to open the inning, but two successive ousters threatened to strand UP’s base runner.

Arribas’ pitches went rogue, however, as Maki Cabriana was hit by a pitch, while a fielders choice brought home Movido for the first run of the game. The Lady Maroons then connected on four consecutive hits, highlighted by a 2 RBI single by Keith Ferrer and capped by a Dela Cruz double. The long UP rally extended their lead to 7-0 before Arribas was retired from the game.

A triple by Movido ended the run that gave Dela Cruz her second run of the game, and UP had an 8-0 lead to end the inning.

After Dela Cruz punched in her third run of the game at the top of the fourth inning, La Salle were able to answer back. Ella Martinez could not find the strike zone as she walked four batters in the inning, including three straight. A double by Pat Belarmino brought home Badeth Benson for La Salle’s first run, while a single later on by Judy Macatangay brought Roselle dela Rosa home to slice the lead to just five runs.

That was La Salle’s last stand, though, as reliever Jhoy Bernabe allowed just one hit in the last three innings. A triple by Maki Cabriana in the last inning punctuated UP’s trip to the Final Four.

Cabriana went 2-for-3 at bat, resulting in two runs, while Ferrer had 2 RBIs.

And against the league-leading Adamson University Lady Falcons, a team that is armed with a twice-to-beat edge, the Lady Maroons know that they need to just keep on pushing.

“We just have to keep the team whole. We can’t give up mid-game and just continue pushing,” UP’s skipper added.

While debut season has been rough, Padda is not giving up