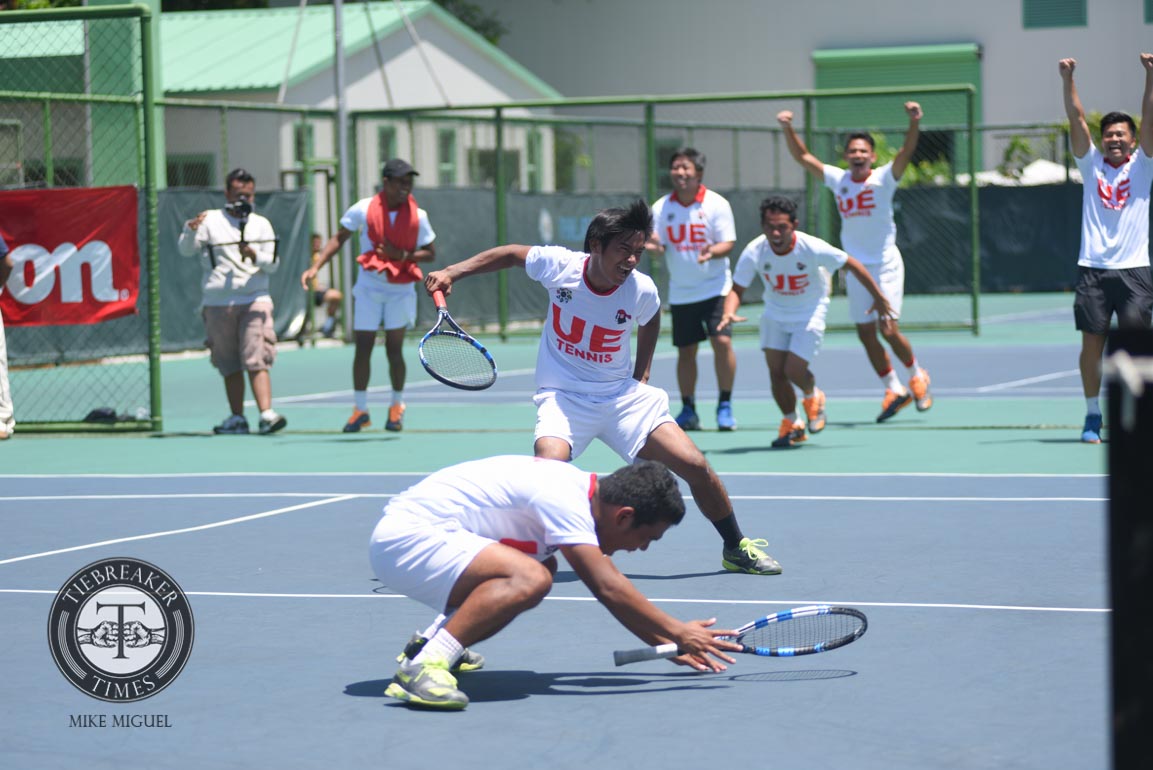 The promise of a maiden title has been fulfilled.

The University of the East Red Warriors stayed true to their pre-tournament billing, edging out the University of Santo Tomas Male Tennisters in the second tie of the Finals, 3-1, to claim their first-ever UAAP Men’s Tennis title, Wednesday afternoon at the Rizal Memorial Tennis Center in the city of Manila.

Most Valuable Player AJ Lim started the day for the Recto-based squad with a comprehensive double-bagel trashing of Francis Suazo. The Davis Cup campaigner displayed overall court control, as the Thomasian was left scouring for points.

The UST tandem of strong doubles specialists Clarence Cabahug and team skipper Joel Cabusas tried to lift the UST squad up, but Rogelio Estaño Jr. and Rolly Saga doubled the lead for the Recto-based squad.

Last year’s Rookie of the Year Cabahug and his captain took the initiative in the first set at 3-1 before getting it at 7-5. Nonetheless, the shaky service game and forehand errors of the España-based duo brought life to the Red Warriors. Coupled with their impressive net plays, Estaño and Saga swept the next two sets, 6-4, 7-5.

Sophomore Dave Mosqueda, however, took one back for UST after taking diwn Rodolfo Barquin Jr. in three sets, 6-4, 6-7, 6-3. The Thomasian upstart bucked cramps to finish off the UE senior with impressive ground strokes.

Christian Lopez and Bernlou Bering then took the initiative in the second doubles match, getting the first set at 7-5. After Red Warriors skipper Paulo Baran and Jeric Delos Santos romped to a 6-2 second set win, the España-based duo threatened to send the tie to a deciding singles match after a 5-0 lead in the third.

What happened afterwards was nothing short of destiny.

Slowly, the Warriors ate up the lead, and when they had leveled the set at five games, there was no turning back. Fittingly, it was the graduating captain Baran who made the last play to finally seal the school’s first crown.

“First time, we’re so happy. What I did was not just history, but a legacy,” Baran declared.