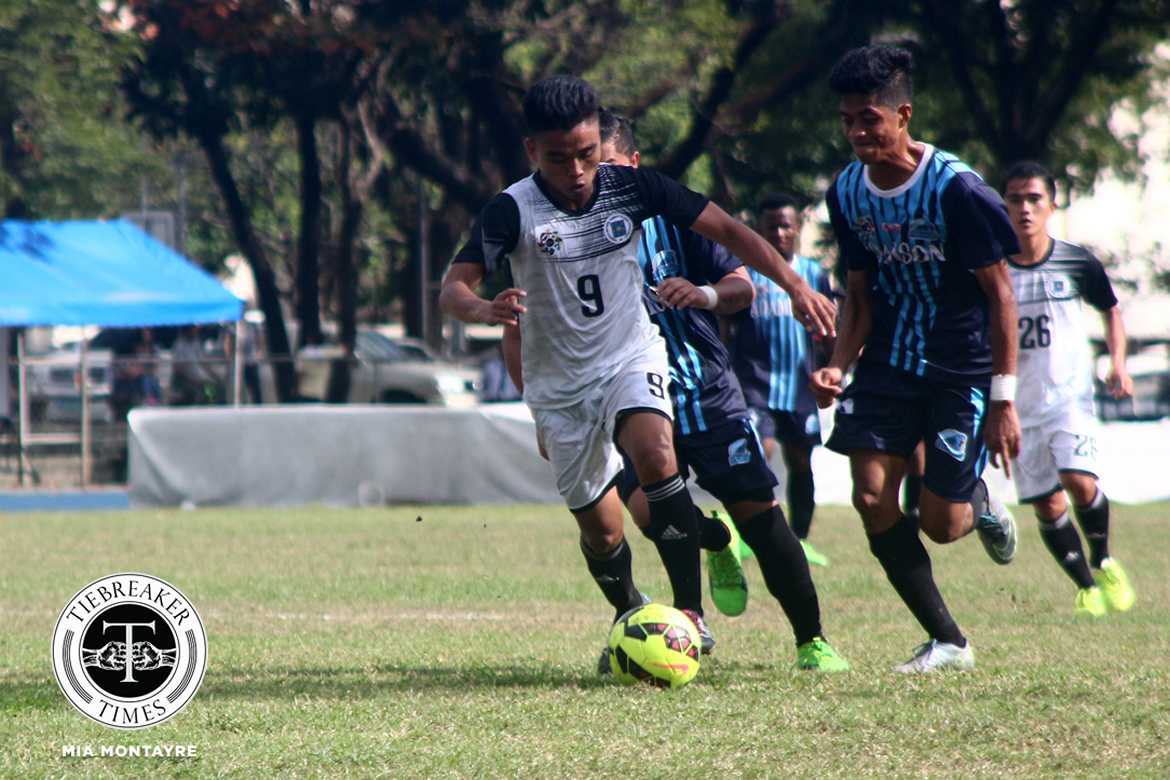 Battling to avoid slipping further away from the leaders, the University of Santo Tomas Golden Booters picked up a 3-0 win at the expense of the Adamson University Soaring Falcons, Thursday afternoon at the Moro Lorenzo Football Field in Quezon City.

There goals from three different players ensured victory for UST, who for parts of the game were threatened by the Soaring Falcons.

Buoyed by their surprise victory over the De La Salle University last Sunday, it was actually Adamson who began the game aggressively. They gave the Tigers a good scare in the 14th minute when Kim Bardaje had a wonderful opportunity to give the Falcons the lead.

Clean through on goal with only Zaldy Abraham to beat, Bardaje slotted the ball towards the go. The finish looked decent but it did not give Adamson the lead, as his strike agonizingly struck the post, allowing UST to clear the ball to safety. It was Adamson’s best chance in the first half, as UST gradually wrested control of the game.

Led by their talisman upfront AJ Pasion, the Growling Tigers were restless in pursuing the Adamson goal. As the first half-hour mark passed, it was becoming apparent that UST would score sooner than later with the way they forced Adamson to defend.

Indeed, Coach Marjo Allado’s players found the back of the net in the 32nd minute through Dexter Benecio. The midfielder was in the right place at the right time to tap the ball in from a saved attempt by AJ Pasion.

Another good goalscoring opportunity came for the Tigers just before the break. Jayson Rafol managed to send a quality shot over Carl Viray. Unfortunately for him, the ball struck the woodwork. UST’s lead remained a measly one goal at halftime.

Facing a deficit in the second half, Adamson got more of the ball once again early in the second half. They were not able to make the most of it, as a well-organized UST defense saw them out quite comfortably.

Committing more bodies forward became a disadvantage for Adamson, as the Tigers exposed them on several counter-attacks. Pasion and teammate Kenneth Tuzon produced decent shots that called Viray into action.

Viray, who played well in last Sunday’s win, also had a decent game for the Falcons today. Nonetheless, the budding goalkeeper could only so much to avoid UST from scoring more in the game.

As UST regained control of the game, the goals came by along with it. The first of the Tigers’ two second half goals came in the 66th minute from Rafol, who nodded in Darryl Regala’s free kick above Viray and into the net.

Rafol was on a roll and was unfortunate not to get another one moments later. Rafol, off a quick break, tested his luck by sending a cross-cum-shot. Viray was beaten but the ball hit the crossbar again.

Seemingly inevitable, UST’s third goal of the afternoon came with 11 minutes remaining. It was Marvin Bricenio who tucked the ball into the net, putting the game beyond doubt.

If Adamson could call themselves lucky last Sunday, their fortunes seemed to have run out today, as they were not even afforded even a consolation goal. Bless Jumo sniffed a late chance for the Falcons, which, like his teammate’s attempt early in the game, brushed the woodwork.

The final whistle sounded soon with UST Coach Allado delighted with the result and the performance of his players. Speaking after the game, he said, “Hinihingi lang namin 1-0 lang basta manalo pero the players, especially in the second half, gusto talaga nila mag-score. We have lapses pero kahit paano, 3-0.”

UST will hope to keep their winning ways when they play against La Salle this Sunday. Adamson, meanwhile, will look to bounce back against the National University on the same day.