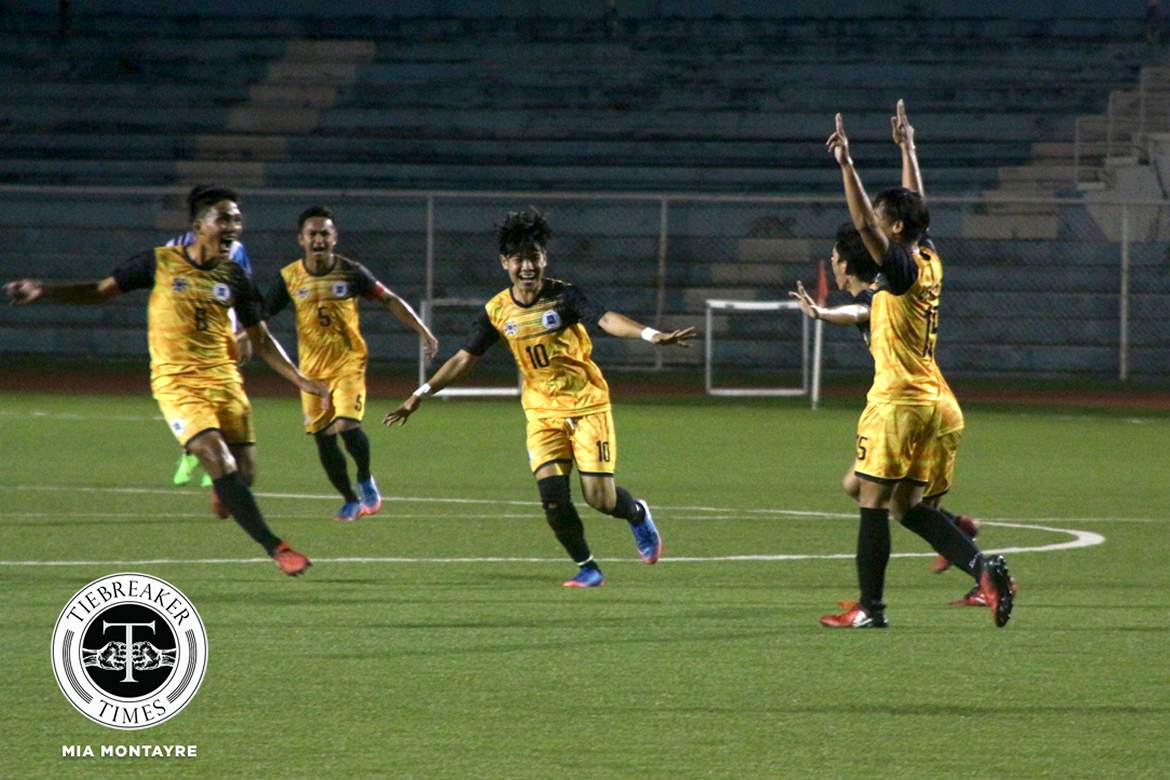 The race to make the UAAP Season 79 Men’s Football Tournament is heating up, and every victory counts.

Tonight at the Rizal Memorial Stadium in Manila, the University of Santo Tomas Golden Booters overwhelmed the Adamson University Soaring Falcons, 4-1, to climb up to fourth place in the standings.

Renz Gumban (40′), substitute Marvin Bricenio (71′), Darryl Regala (79′), and rookie Conrado Dimacali (83′) scored the goals for the Golden Booters, while Kim Bardaje (88′) put one in for the Soaring Falcons.

Favorites UST controlled affairs right from the first whistle. Adamson were forced to defend for long periods in the first half, as the España school assaulted Carl Viray’s goal at every possible chance.

Credit should go to the Soaring Falcons’ defense for holding out as long as they possibly could. There’s a sturdiness about that Adamson backline this season that wasn’t apparent in the previous years.

However, UST weren’t to be denied a goal. Much to the relief of the Golden Booters and their supporters, Gumban was able to beat the Soaring Falcons defense and score in the 40th minute to earn a 1-0 cushion at the break.

Upon the game’s resumption, UST were unlucky to not have doubled their lead. Substitute winger Rodrigo Villanueva was through on goal, only for his resulting shot to hit the crossbar just minutes into the second half.

Halfway through the period, an unfortunate deflection between two Soaring Falcons defenders pushed the ball into the Adamson box. The Golden Booters took full advantage of the mishap, as the ball was passed to substitute Bricenio, who tapped it in in the 71st minute.

Adamson tried to salvage a consolation goal, but UST had the San Marcelino school in their locker. A failed attack gave the Golden Booters the chance to run a quick counterattack in the 79th minute through Regala.

And UST still weren’t done. The icing of the cake was Dimacali’s shot in the 83rd minute from way downtown. Adamson’s Kim Bardaje then pulled one back in the 88th minute, although the contest was already over by then.

UST (13 points) will go against the Ateneo de Manila University on March 25, 7:00 PM at Rizal Memorial, while Adamson (3 points) shall face the University of the Philippines on March 26, 9:00 AM at the FEU-Diliman field.

‘El Granada’ proves that he still has it