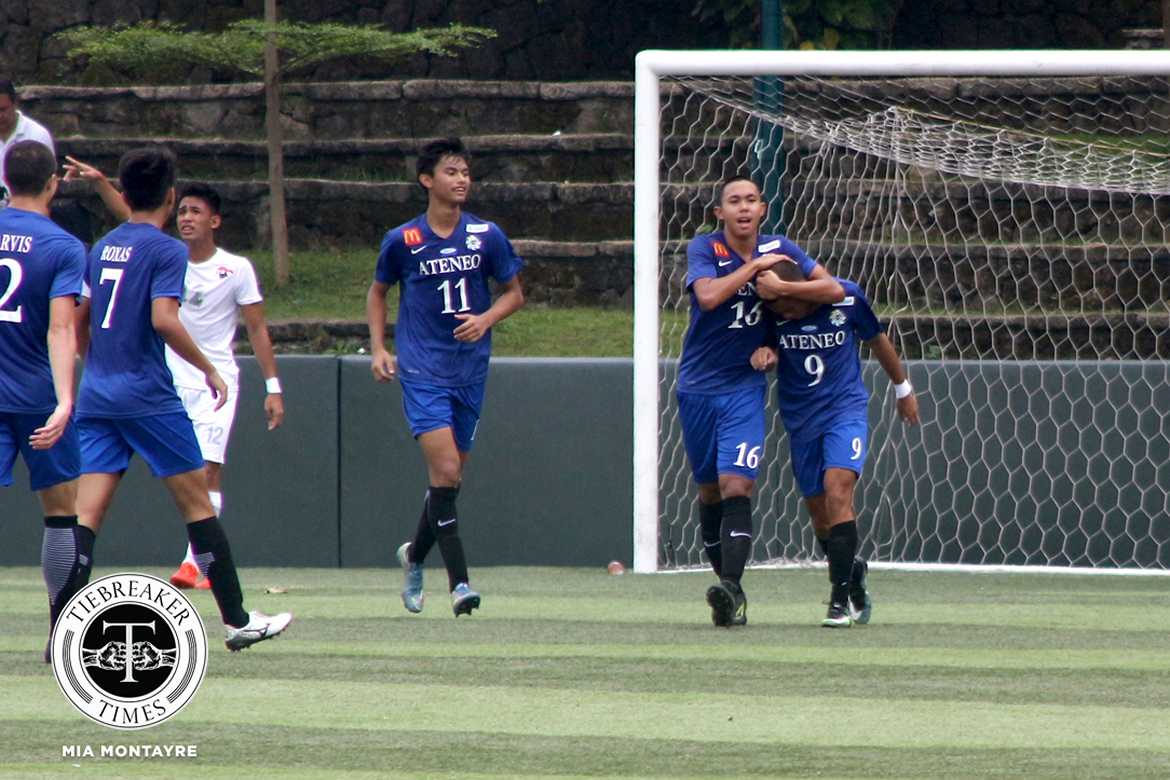 The Ateneo de Manila University Blue Eagles’ hot start in the UAAP Season 79 Men’s Football Tournament continues, as they secured a routine 3-1 win against the University of the East Red Warriors.

Mario Ceniza (16′), Samuel Lim (30′), and Jordan Jarvis (39′) scored the goals for the rampant Blue Eagles today at the Far Eastern University-Diliman field. Bon Opeña (71′) clinched a consolation goal for the Red Warriors in the second half.

Ateneo controlled the contest right from kickoff. The Blue Eagles manned possession, and only allowed the Red Warriors chances at goal early in the game. Blue Eagle goalie Jae Arcilla made fine saves to deny Trent Vergara and Opeña.

From then on, it was all Ateneo. The Blue Eagles circulated the ball and found an opening in the 16th minute. Ateneo launched a ball into the UE box which the latter failed to deal with, leaving Ceniza unmarked and ready to capitalize on the error. Ceniza then finished calmly to give Ateneo their first goal.

UE’s floodgates were open and Ateneo simply played their game in search of more goals. The Blue Eagles eventually scored twice in just 10 minutes. Lim doubled Ateneo’s lead in the 30th minute with a sensational bicycle kick, while Jarvis’ header at the 39th minute gave the Blue Eagles their third goal.

Ateneo entered the break with a 3-0 lead, a well-deserved scoreline after a dominant first half against UE.

Once the contest resumed, a much-improved UE came to the fore in terms of attack. The Red Warriors created chances on the Blue Eagle goal which begged to be converted. It took UE until the 71st minute for them to score, courtesy of Opena’s tap-in.

Despite the goal, there was no real momentum shift between UE and Ateneo. The Blue Eagles still dictated the terms of play while the Red Warriors were forced to feed on scraps. No potential comeback was forthcoming, though, as Ateneo prevailed 3-1 against UE.

At the end of the game, Merida shared that Carlo Liay and Niño Herrera — who have missed Ateneo’s last few games — are still unsure of playing in their next fixture against the University of the Philippines. “Late siguro. I-try namin this week na sana ihabol pero hindi yan mag-start,” stated Merida.

Up next for Ateneo (5-0-0) will be defending champions University of the Philippines on February 26, 2:00 PM, at the Rizal Memorial Stadium in Manila. On the other hand, UE (0-1-4) shall face the Adamson University on March 2, 9:00 AM, at Ateneo’s Moro Lorenzo Field.

Casambre goal lifts UP past UST for third straight win