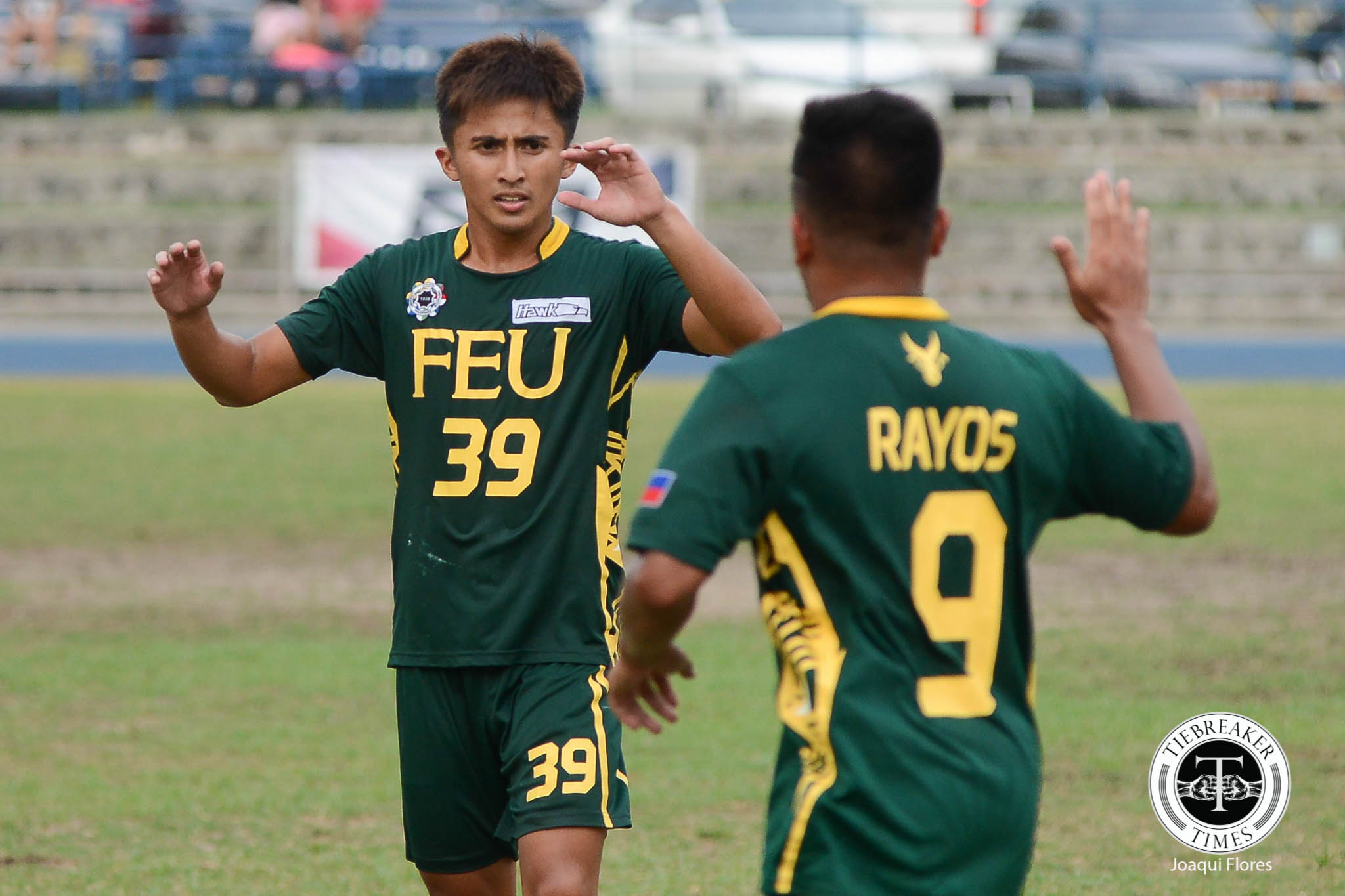 Brandishing the composure that elite squads are made off, the Far Eastern University Tamaraws — a team that had missed the Final Four last season — shook off an early setback and turned back the Adamson University Soaring Falcons, 5-1, Thursday afternoon at the Moro Lorenzo Field in Katipunan, Quezon City.

The win gifted the Morayta-based the semifinals berth.

First-year head coach Vince Santos was surprised to receive the news and admitted, “To be honest, we’re not looking of getting inti the Final Four after this match.”

“I said, we’ve been working since the start on our system. We’re not scoring as much as we’d like to,” Santos added.

Adamson stunned the Tamaraws seconds after kick off, as a pass went past FEU defender Reymart Cuboc, which rookie Dave Parac then failed to clear. Ejike Ugwoke was there to take it and put the Falcons in the lead.

Santos, however, knew that his team would bounce back thereafter. “I have commented on this already: we lack confidence on our attack. We have hoped to resolve it in this match and the next ones,” he shared.

The Season 76 and 77 kings equalized soon after. Paolo Bugas delivered a lovely corner kick, which found Michael Menzi in the fourth minute.

Several chances for both teams soon followed, which did not bother the young goalkeepers Parac and Carl Viray. Absence of finishes put the scoreboard at 1-all at the break.

The Falcons had a few opportunities to regain the lead as they intercepted the passes in the midfield. However, point-blank shots from Brian Jumo and Ugokwe went straight into Parac’s hands.

Soon after, the organized FEU defense turned to pump up their offense. And true enough, the Tamaraws finally took the lead.

Captain Val Jurao found an opening and sent the ball into the Adamson goal, nabbing the 2-1 advantage for the green-shirts.

Getting their attack going, the rest of the squad took their skipper’s initiative and peppered the Falcon defense with more goals.

Just seconds after Jurao, Rayos collected a beautiful pass from the flank before doubling the lead for FEU. The midfielder then scored again in the 72nd minute off another good buildup.

With a few minutes left in the contest, substitute and sophomore striker Rico Andes was sent off due to a dangerous bicycle kick attempt. Nonetheless, Justin Calamba made amends for that unfortunate incident with another screamer of a shot to eventually seal the win in the 82nd minute.

Santos believes that losing players to injuries and cards throughout the season fires up others to step up every match. He shared, “Actually blessing siya. We had opportunity for other players that usually are reserves.”

With Andes out on suspension, the returning semifinalists (22 pts) will need that bench mob to work as they face the outside-looking University of Santo Tomas Golden Booters (16 pts) on Sunday, April 9, at 3pm at the Rizal Memorial Football Stadium. Later that day, the Soaring Falcons (3 pts) take on the University of the East Red Warriors (8 pts) at 7pm.