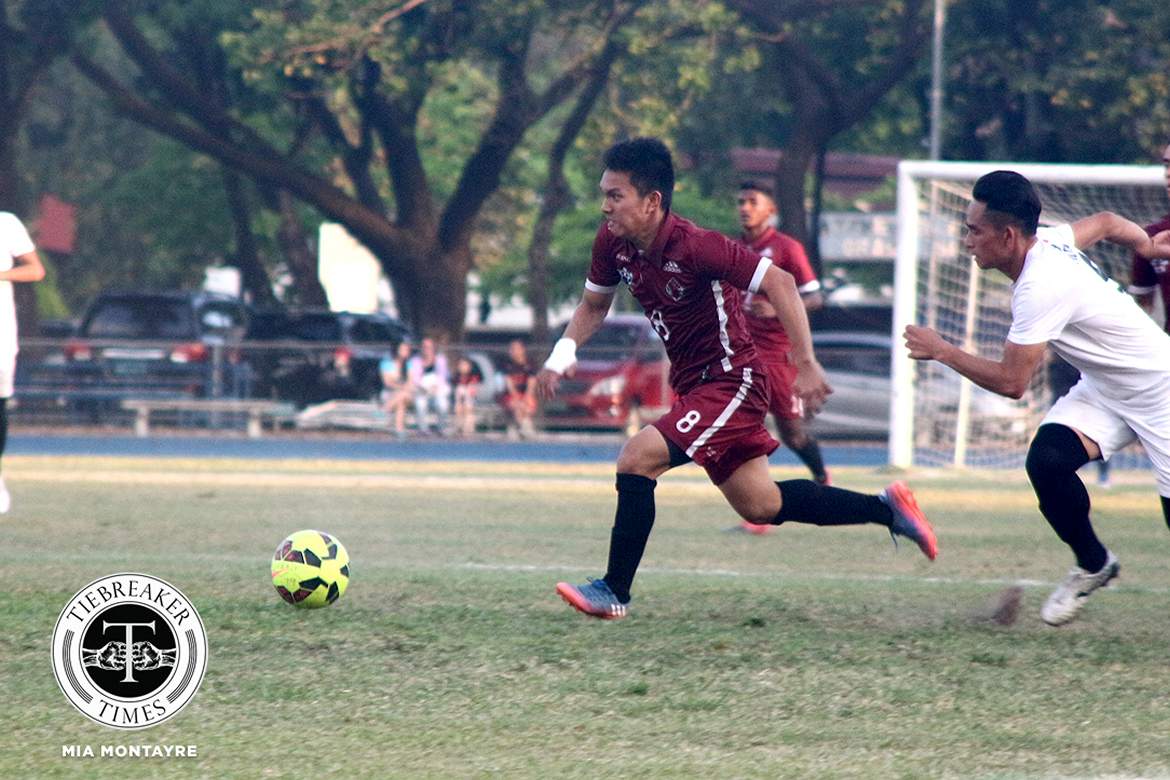 By amassing their 21st points in the season, the champions are now only behind league leaders Ateneo de Manila University by two points. Down the bottom of the standings, the Red Warriors remained in seventh with five points earned from 10 games.

Known to never settle for a result, UP head coach Anto Gonzales was pleased with the effort the players had given but also noted a few concerns that needed to be addressed moving forward.

“Kulang ng coordination at command sa back line. We were pretty unstable in the first half and that really made it difficult to establish our attack,” he commented.

UP began the game in the best way possible, as Borlongan opened the scoring just inside four minutes. The midfielder did a good job to cut inside the UE box before drilling a deflected effort off JRV Malayo’s head that caught UE goalkeeper Frank Rieza off-guard.

Conceding earlier than when they had first played UP this season, the Red Warriors put on a different mask this time around, as they didn’t let it get the better of them. Immediately after the restart, Regil Galaura blazed down the right flank to set up Mar Diano, who equalized right away with an effort from 10 yards.

At 1-1 just inside the first five minutes, the game was wide open, though UP looked more in control as they dominated possession in the first 45 minutes. Yet the Maroons might have actually gone behind had it not been for a fortunate call in the 13th minute.

Not under immediate threat, Javi Bonoan invited danger as he gave away possession cheaply to a lurking Diano. The UE forward then accelerated with the ball, only for the UP defender to gain enough ground and concede a foul just outside the box.

On another day, Bonoan may have seen red, but lady luck smiled on him and he only received a caution for the challenge. The Red Warriors didn’t make the most out of the opportunity as the resulting free kick taken by Opeña didn’t breach the wall of men in maroon shirts.

Apart from that moment, UP were not bothered much defensively, and it allowed them to gather momentum in their quest for the breakthrough goal.

A brilliant link-up play around the UE box was nicely finished by Borlongan to register his second goal of the game and his fourth goal in Season 79. The Cagayan de Oro native received Miyagi’s pass before shrugging off Louie Polinag to strike the ball past Rieza.

It was a deserved advantage for the champions to carry into halftime, as they were on top of their opponents. Nevertheless, they nearly allowed their foes to level once more in first half added time.

Just like in the first goal of UE, Galaura teed up teammate Diano, but this time around the highest-scoring Red Warrior couldn’t replicate the finish he had made 40 minutes earlier. Shortly after UP keeper Anton Yared made the save, the halftime sounded.

Not satisfied with a one goal lead, the Maroons sustained the momentum they had established late in the first half as they endeavored to put the result beyond doubt. The formidable sophomore strike force took turns unlocking the UE defense for the third time, and out of the several waves of attack, they produced two good chances in the early stages of the second half.

In the 58th minute, Saavedra forced a reaction save from Rieza, and ten minutes later, Miyagi was denied by the crossbar as his effort from the edge of the box went past Rieza but not the woodwork.

Their relentless pursuit for an insurance goal was eventually rewarded in the 77th minute of the game, when Miggy Clarino’s shot was spilled by the UE goalkeeper, allowing Sean Patangan to guide the ball in on the rebound.

Aware that the outcome of the game was all but decided, the Red Warriors gave it one last go at the end, with Diano’s cross causing a scramble inside the box, and only Bon Opeña would know why he missed a decent effort to pull one back and perhaps cause an unlikely stir in second half added time.

For Gonzales, this game made him realize how much his team has struggled to cope with the absence of the veterans, who are currently with the Under-22 national team set up.

“In terms of doing their job in their particular positions, I think they did okay. But in terms of really pushing the team, telling the team what necessary adjustments to make, [and] game management; I think we were lacking today,” he expounded.

#ReadMore  After going 'krung-krung' in second round, Djanel Cheng involves everyone in semis

On the bright side, the former Azkals midfielder lauded Borlongan and Miyagi who he thought flourished despite not finding the back of the net. “Yung improvements na hinihingi namin sa kanya, medyo nakuha niya today,” he observed.

Still without their leaders, the UP Maroons are hoping to improve as a team when they take on the Adamson University on Sunday. Later that day, UE will look to bounce back in their game against the National University. The games will be held at the Rizal Memorial Stadium.