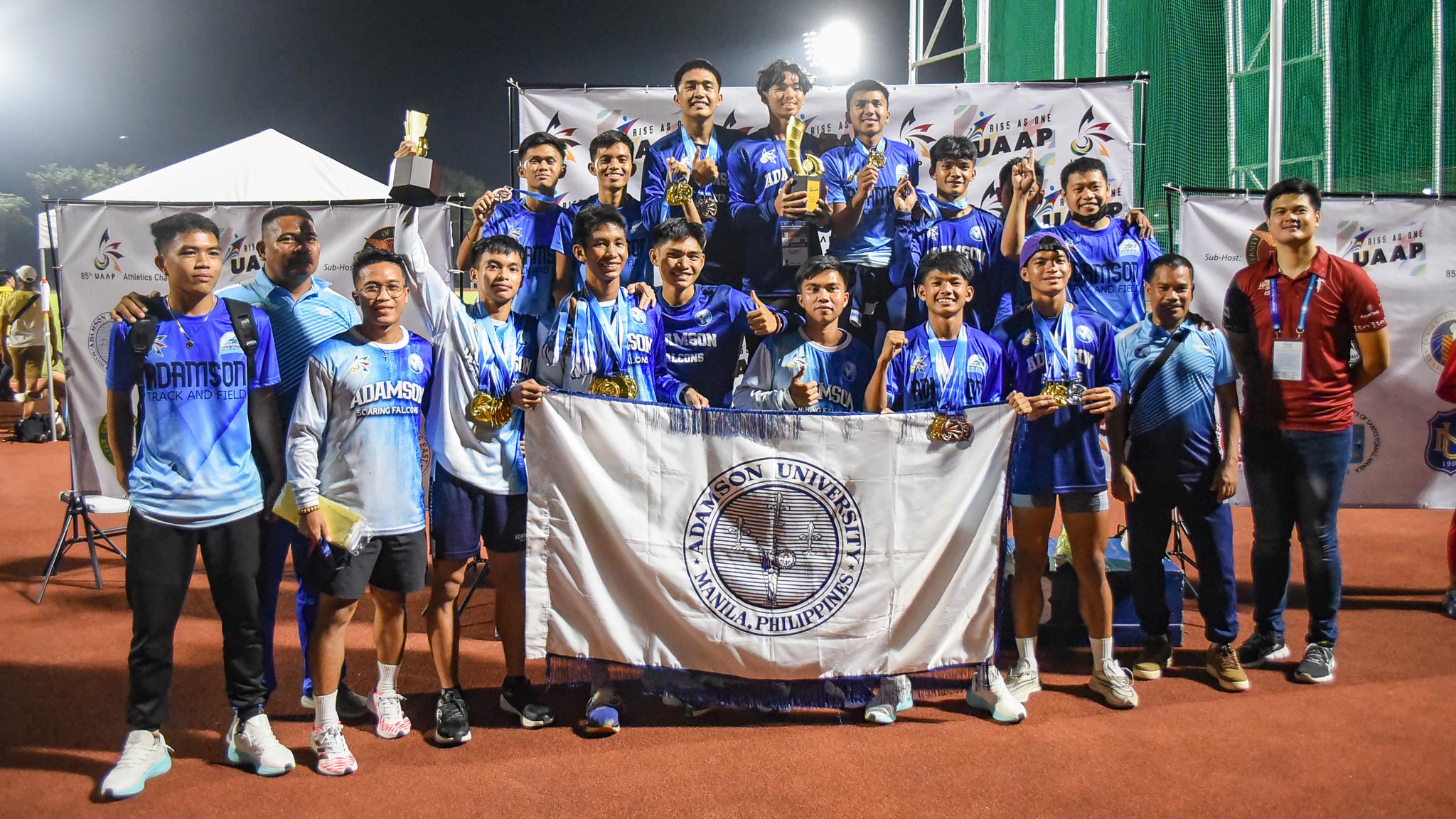 Adamson University annexed a second Boys’ title at the end of the UAAP Season 85 Athletics Championships Sunday at the Philsports Track and Field Oval in Pasig City.

With 445 points, the Baby Falcons ruled the competition for the first since winning it all in 1998. The championship likewise is the first for this season’s host in the high school division this season.

Meanwhile, University of Santo Tomas officially secured its first-ever Girls’ crown in style with 537 markers, after dominating the five-day meet over University of the East and Adamson. The Junior Female Tiger Tracksters took the school’s fourth title for the season.

John Mark Martir ended the championship run on his own terms, taking two golds for the Baby Falcons at the 3000-meter steeplechase and the 4x400m relay.

Martir paced ahead of the pack with 10:38.68 minutes in the steeplechase, crossing the finish before University of the East’s Karl Angelo Oxales with 10:53.06 and Rowin Ongcal with 11:12.73.

The rookie then joined forces with Emanuel Morales, Nash Candelario, and Kent Jardin in finishing the campaign with the gold in the relay with 3:32.26. Kent Abilay, Harvey Villasan, Sean Narag, and Aryan Piomato of UST ended second with 3:38.25, while Pi Durden Wangkay, Aycelle Mance, Jayve Beterbo, and Ynigo Ramos of De La Salle Zobel finished third with 4:17.88.

Villasan bagged the gold in the 110m hurdles to give one title for UST with a time of 15.62 seconds. Adamson’s John Michael Manaloto and Narag completed the podium with 16.68 and 17.09.

UE’s Chinno Balmores completed his run with yet another gold, winning the shot put with 12.98 meters, leaving Jhay Ticay of Adamson to the silver with 10.18 and Karl Mangapis of UST to the bronze with 10.08.

Jardin was adjudged the Most Valuable Player after finishing with an immaculate run of seven golds in seven events, winning the titles in the 100m, 200m, long jump, triple jump, pole vault, 4x100m relay, and the 4x400m relay. The 18-year-old Iloilo native also set new UAAP records in 100m and triple jump.

Mangapis shared the Rookie of the Year award with Adamson’s John Gabriel Dimapilis as both ended with a bronze. Dimapilis took his in the high jump.

The Junior Male Tiger Tracksters took the runner-up trophy with 418 markers, while the Junior Red Warriors ended in third with 281. 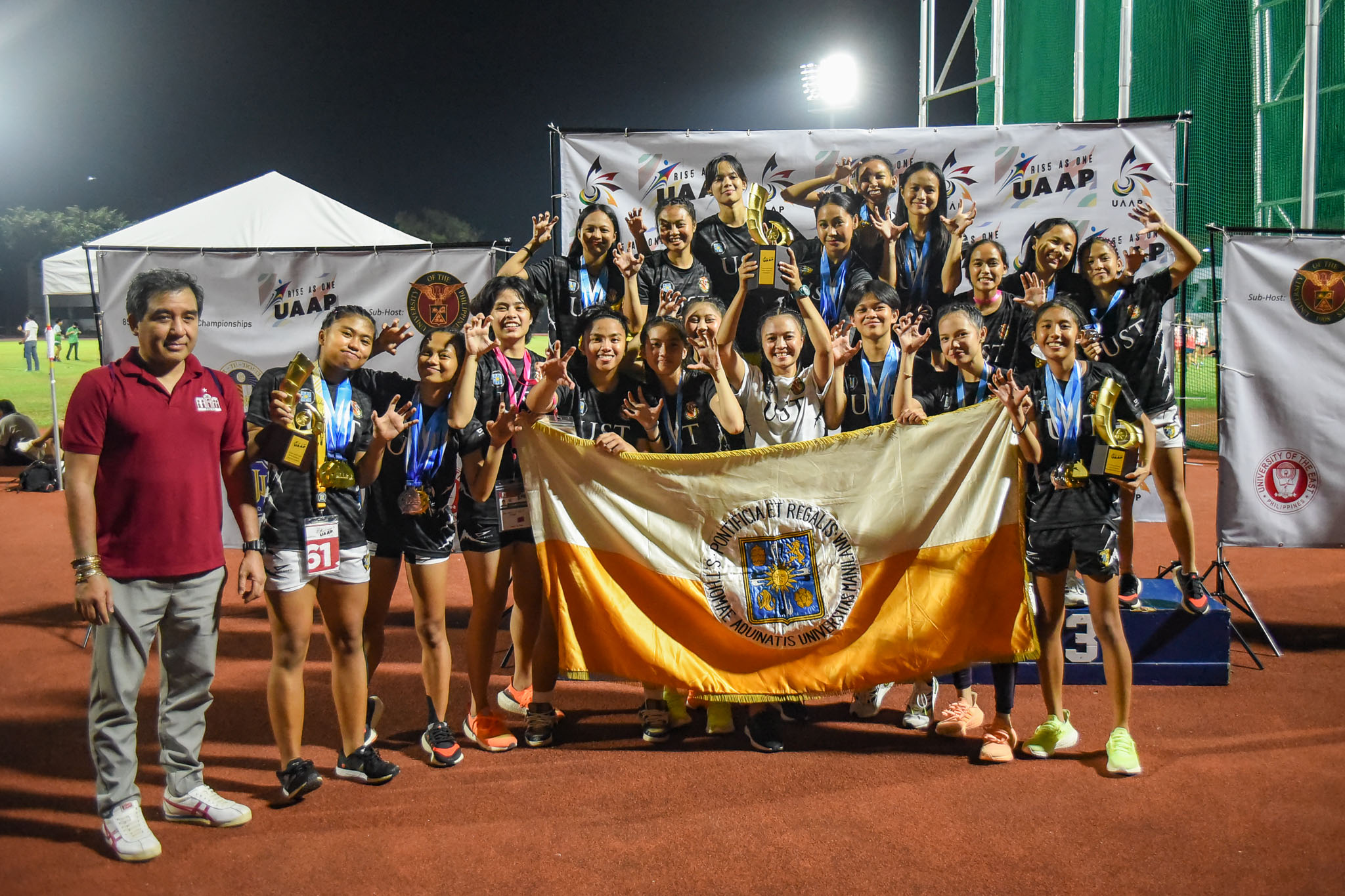 After taking the four golds on the girls’ side, UST staked their claim with a breakthrough title after amassing 116 points on the final day.

Kyla Laylo opened the day with the title in the javelin throw with 32.84m, winning it past two Adamsonians Irene Veloso with 31.45 and Annamae Muring with 29.02.

Season Most Valuable Player Jeanne Arnibal collected the gold in the high jump, clearing the bar at 1.55m. Rhea Lego of Adamson took 1.49 for the silver, while Mitch Niegas, also from UST, recorded 1.35 for the bronze.

Arnibal then rounded her romp with a second title of the day in the 100m hurdles, zooming past teammates Lyka Miravalles and Wency Eli with 15.64 seconds. Miravalles and Eli came in almost two seconds later with 17.28 and 17.39, respectively.

The Junior Lady Warriors pulled through with the second-place finish with 275 markers, as the Lady Baby Falcons ended third with 240.

Aside from her two titles of the day, Arnibal previously won the long jump, the triple jump (with a new UAAP mark), and the 4x100m relay. Fellow Tiger Trackster Lyka Raterta ended with two golds in the 1500m and the 3000m, one silver in the 5000m walk, and one bronze in the 800m to end as this season’s top rookie.