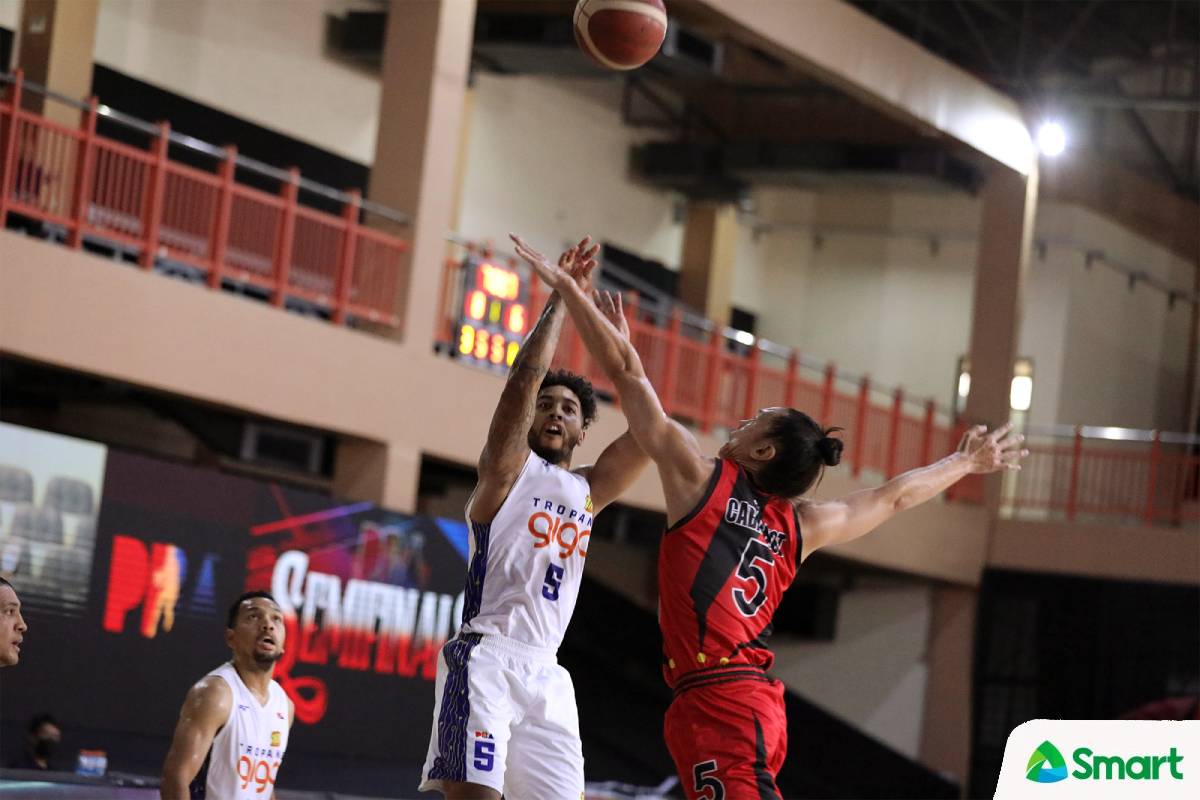 TNT is returning to the PBA Philippine Cup Finals after taking down a hard-lucked San Miguel Beer, 97-79, in Game Seven of the semis, Sunday evening at the Don Honorio Ventura State University Gym in Bacolor, Pampanga.

The Tropang Giga actually trailed by eight after the first period, but it didn’t take long for them to find their touch. And they went on to play near-perfect basketball afterward on the way to booking the last ticket to the Big Dance.

Last year’s runners-up will vie for the Perpetual trophy versus the Magnolia Hotshots in a best-of-seven affair that starts next week.

“I thought that was the most important thing – our frame of mind coming into this ball game,” said head coach Chot Reyes. “I said, ‘Let’s look forward to this game. Let’s not dread going into Game Seven. Let’s be excited.”

Roger Pogoy turned in his best performance of the conference yet with 27 points on a 52-percent clip, including 4-of-6 from beyond the arc. He led his side to their first playoff series win versus SMB in eight years.

Mikey Williams was back to his old self with 20 points on three triples, including two of his team’s four treys in the second quarter. That saw them erect a 45-36 advantage at the turn after starting the period behind, 15-23.

Troy Rosario had a double-double of 12 points and 12 rebounds in a performance highlighted by two two-handed jams in the fourth quarter. The last of those pushed the Tropa’s lead to 17, 84-67, with 5:16 remaining.

Kelly Williams filled up the stat sheet with 11 points, 10 boards, two blocks, two steals, and an assist – all in the first half.

Poy Erram nearly posted his own double-double with nine markers and 11 caroms. His last rebound led to his final two points of the match, which gave TNT its biggest lead at 26, 97-71, with 1:51 left in the game.

“They came in with great resolve,” said Reyes. “All the rest, they did it. They put in all the effort. They’re the once who executed, made the shots, made the defensive stops. We’re just fortunate to be back in the Finals.”

Reyes himself is back in the Finals after nine years, but he isn’t thinking much about it. Instead, they have their sights on the upcoming battle ahead.

“While we’re happy to win, we know that there’s still a huge, huge mountain to climb,” the eight-time champion coach said. “Now we have to figure out how to play and compete against this tough Magnolia squad.”

The Beermen miss the Philippine Cup finals for the second straight time after its unprecedented reign of five consecutive seasons.

Chris Ross had 15 points and 11 boards. CJ Perez added 11 for a Beermen crew that got bitten by the injury bug at the worst time possible.

Perez hurt his left ankle late in the first half yet played through it, but Mo Tautuaa and Terrence Romeo limped out due to apparent leg injuries. Both were a massive hit to the rotation of head coach Leo Austria.

SMB also picked the wrong time to misfire from the field. It made just 27 of its 83 shots, including 8-of-32 shooting from three.

Marcio Lassiter, Game Six’s star with 19 points on five treys, was scoreless. He missed all of his eight shots, half of which was from the outside.