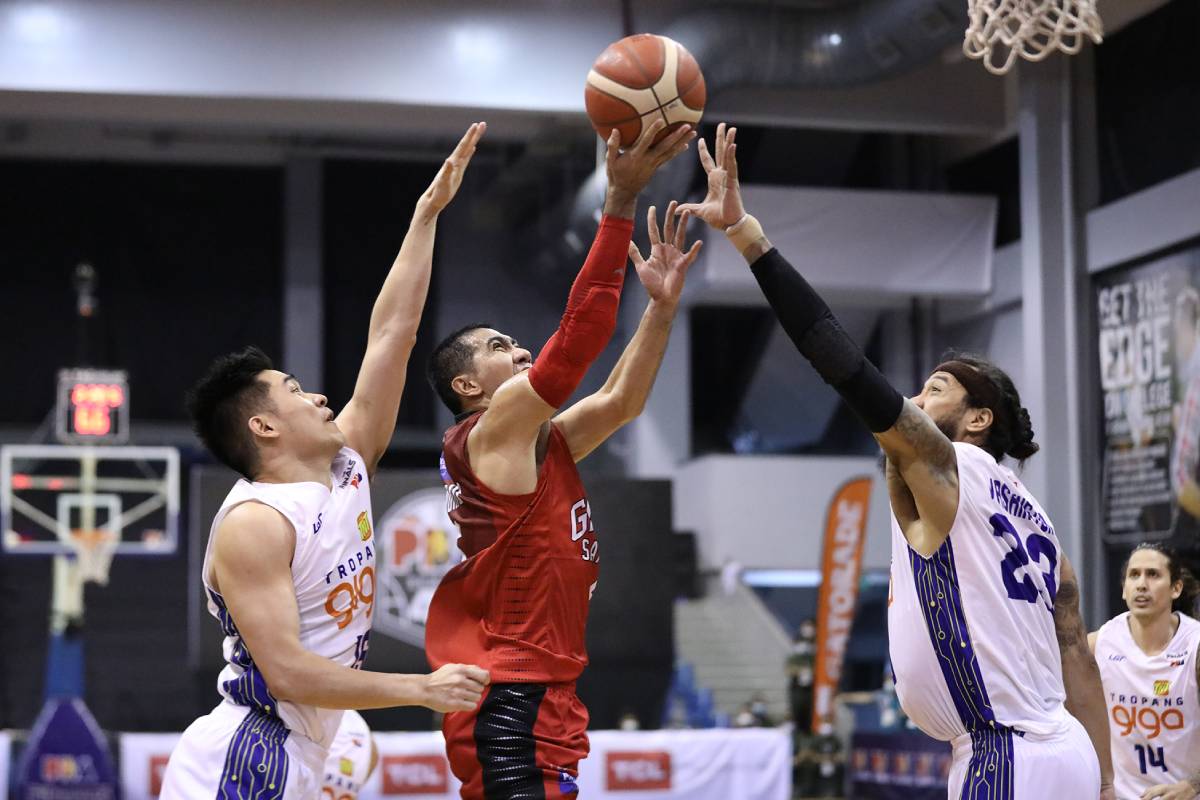 The 5-foot-9 floor general hit big shot after big shot down the stretch as he doused cold water to the fiery rally by the Tropang Giga, who closed to within just three after going down by 18 points early in the fourth quarter.

Tenorio finished with 22 points on 57-percent shooting from the field, on top of six assists, three steals, and two rebounds as the Gin Kings moved on the cusp of ending their 13-year All-Filipino title drought.

They can do so on Game Five on Wednesday, Dec. 9.

“I knew we needed LA’s presence out there when they started to make their run. LA, I’ve used this word a lot lately but he has no fear. He’s gonna take that shot, he’s been taking that shot for his whole career,” said Coach Tim Cone.

The Gin Kings were in control for the majority of the match and held an 82-64 lead after a Stanley Pringle triple with 10:22 to go in the final frame, but the opposition didn’t just go down without a fight.

Finally regrouping after the sudden departure of main man Jayson Castro in the third canto due to injury, the Tropang Giga chopped the lead to just three, 85-88, as Roger Pogoy hit back-to-back triples with 2:47 remaining.

A shootout then ensued. Tenorio responded with a three of his own 20 seconds later, but Pogoy got back with another long bomb to once again make it a three-point game, 91-88, approaching the final two minutes.

Tenorio, however, would get the last laugh. He hit another trey to widen the gap to six, while Pogoy missed. The ball soon got to Scottie Thompson, and he went all the way for a lay-up to make 96-88 with 1:25 on the clock.

Tenorio would hit a shot from the left baseline following an Aljon Mariano feed moments later to re-establish a 10-point lead, and it eventually became the final count as Pogoy and TNT could not find their mark anymore.

“Those shots he was making were just tremendous,” an in-awe Cone expressed. “It really turned into the Pogoy show out there. It’s easy to make those shots, it’s harder to respond, and that’s what LA did.”

“He came down and made two huge responses for us from the three-point line, and that kind of took the sails right out of Talk ‘N Text because they were all getting pumped up from Pogoy’s shots. That was cold-blooded.”

Japeth Aguilar also made his presence felt in the win with 22 points, nine rebounds, and two blocks. Stanley Pringle made 15 points, as Thompson had 11 markers, 11 boards, and nine dimes.

“We hit big shots all night, we made plays, we made defensive plays, held the lead for the most part, and then they made their big run. But I thought we played well tonight. I hope we can carry it over into Wednesday.”

Pogoy led TNT with 34 points, marking the second time this Finals that he scored beyond 30 as he had 38 in Game Two. He also collected six assists, four rebounds, and the same amount of steals.

#ReadMore  Sta. Lucia made sure to utilize Reyes, Palomata vs PLDT

Poy Erram made 19 points and 16 rebounds, as Rosario had 16 markers and nine boards in the loss where they once again missed the services of Ray Parks, still because of the calf injury he aggravated in Game One.

Parks may even be joined by Castro in the injury list after getting hurt that led to his exit at the 9:35-mark of the third following a drive. He’s now listed as day-to-day and TNT hopes he’ll be fit to play on Wednesday.