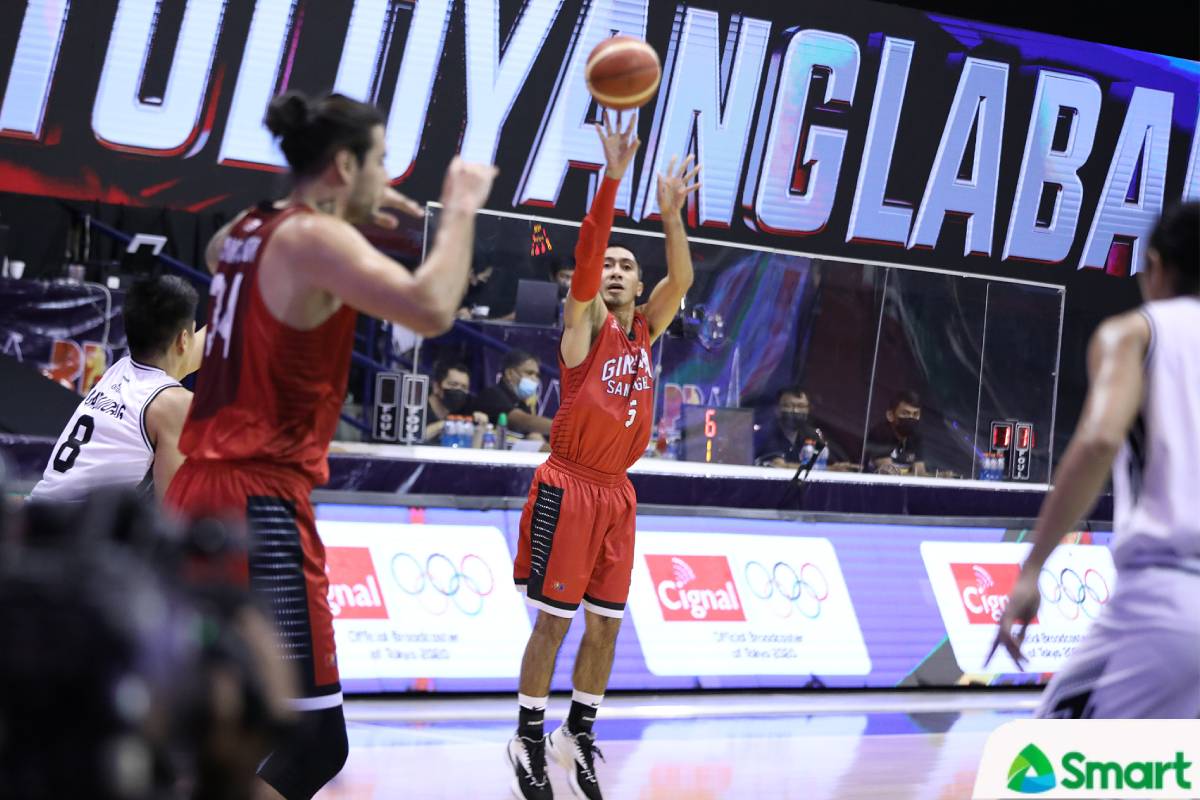 Barangay Ginebra staved off Blackwater, 96-81, to place its title defense bid on the right track in the 2021 PBA Philippine Cup, Friday at the Ynares Sports Arena in Pasig.

LA Tenorio provided the stability badly needed by the Gin Kings to repel their foes, before Stanley Pringle and new guy Christian Standhardinger joined hands to apply the finishing touches for their first victory of the season.

“It wasn’t pretty, that’s for sure. We haven’t put together any pretty basketball yet. We’re still working to be more coherent and more together in our play right now. It’s been a little bit of a struggle,” offered head coach Tim Cone.

Pringle led the reigning champs with 19 points. Tenorio had 17 points and seven assists, and Standhardinger made 11 markers and 19 rebounds as the team bounced back from the 75-94 loss to NLEX in their debut last Sunday.

Friday’s showing was definitely better than what they put out versus the Road Warriors, seizing control of the match early that saw them lead by as many as 17 points twice late in the second quarter.

But the Bossing proved to be a tough nut to crack, With Mike Tolomia leading the way and with strong support from Paul Desiderio and Kelly Nabong, the gap was sliced to just two, 77-79, with 6:12 remaining in the final chapter.

That’s when Tenorio and his steadiness came into play. He first made a three-pointer, then banked in a teardrop to widen the lead. He later found Japeth Aguilar for a slam, making it an 86-77 edge with 3:40 to go.

Nabong made a total of four three throws afterward, and a glimmer of hope shone on Blackwater after forcing a five-second inbound violation. But Pringle was there to spoil whatever plans they had to inch closer.

The reigning Philippine Cup BPC drove for a lay-up to snap their momentum. Standhardinger then helped out, converting back-to-back three-point plays to give Ginebra a 94-81 lead with 1:21 left to ice the game.

“We weren’t ready to play against NLEX, that’s for sure. We did a better job of coming in a little bit more focused. We’re just the kind of team that just believes we’re going to get better as the conference goes along,” Cone said.

The win has made it a double celebration for Aguilar, who just became the latest member of the PBA’s elite 5,000 points club after his first basket of the game in the opening period. He finished with 14 points.

Tolomia, meanwhile, had 22 points on 8-of-12 shooting to lead Blackwater, who suffered their third loss in as many games.

Ginebra will figure in another Manila Clasico affair with Magnolia on Sunday, July 25, at 4:35 p.m. Blackwater, on the other hand, is set to face another powerhouse squad in San Miguel on Wednesday, July 28, at 12:30.