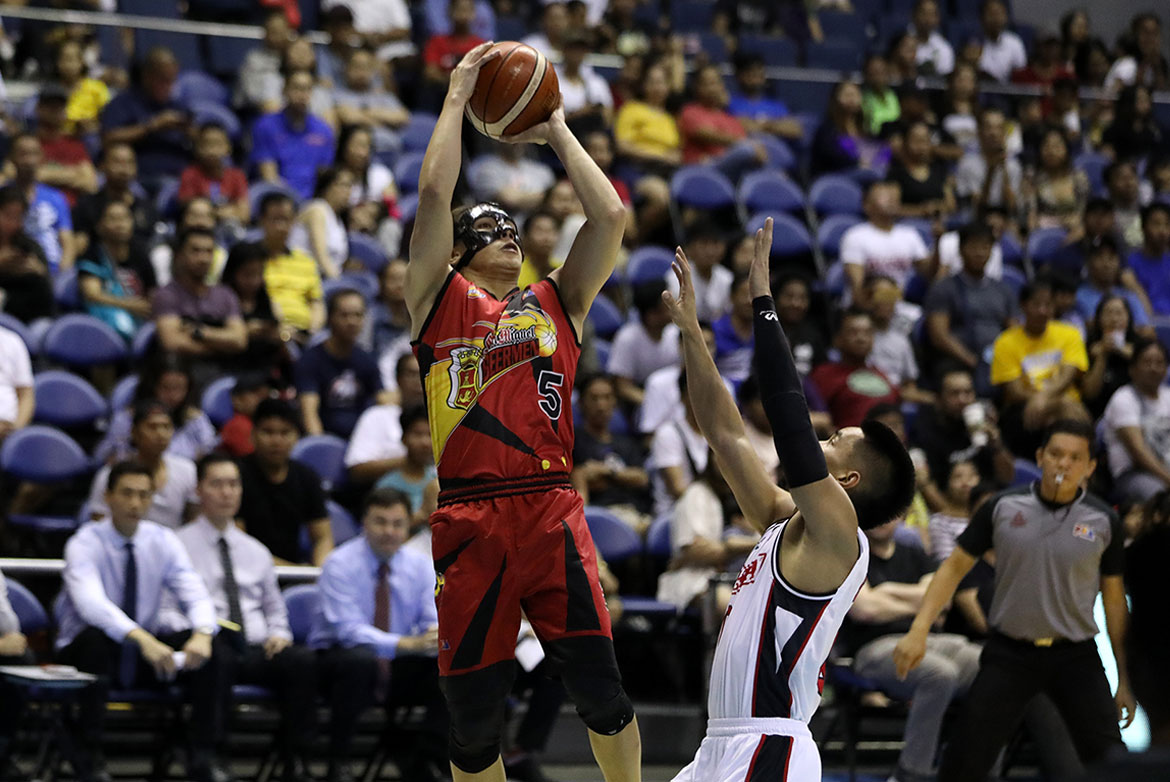 Christian Standhardinger finally returned after a five-game absence, and the San Miguel Beermen churned out a masterful outing to beat the Alaska Aces, 114-96, in the 2019 PBA Philippine Cup, Sunday night at the SMART Araneta Coliseum.

The defending four-time champions pulled away early in the fourth quarter behind Arwind Santos and Von Pessumal. But it was Standhardinger who provided the finishing touches in the win that hiked their card to 7-4.

The Filipino-German forward finished with 23 points, seven rebounds, an assist, and a steal in 23 minutes.

“I’m happy with my players, especially with Christian Standhardinger. He really worked hard even though he only had two days of scrimmages. And he’s not yet a hundred percent,” lauded San Miguel head coach Leo Austria.

Alex Cabagnot spearheaded SMB with 31 points on 13-of-20 shooting. Santos made 17 points and nine rebounds with four blocks. Pessumal stepped up for the foul-plagued Marcio Lassiter with 14 points and three steals.

June Mar Fajardo only had 13 points and 10 rebounds, as he did not see action from the latter part of the third all the way through thanks to Standhardinger’s exploits. Chris Ross had 10 markers and 14 assists with four steals.

The victory helps San Miguel solidify their hold of the fifth seed. Moreoever, there is a high possibility they will face rivals TNT KaTropa. But Austria is simply happy that they will not enter the next round on a losing note.

“We all know we’re already in the quarterfinals, but this game is really important for us. I’m so happy with the players because nakita niyo sense of urgency. We don’t want to get to the quarterfinals on a losing note,” he said.

Alaska failed to follow up their 92-77 win over Meralco Bolts last Wednesday and fell to 4-6. They still have a chance to bounce back – and improve their playoff chances – versus the NorthPort Batang Pier this Wednesday, still at the Big Dome.

With Marcio Lassiter plagued with fouls, Von Pessumal steps up and delivers