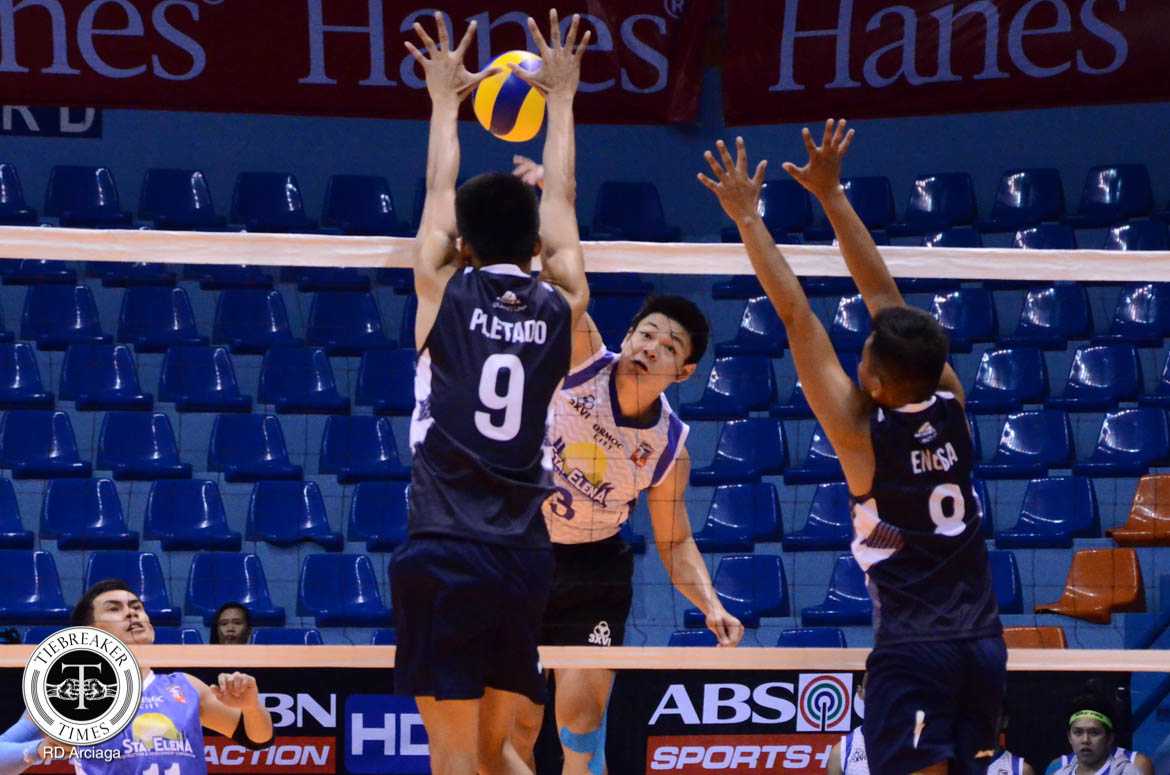 Berlin Paglinawan and Joven Camaganakan combined for 43 points, scoring 23 and 20 respectively, to carry the Wrecking Balls.

Sta. Elena never gave up the lead in the first set, even with Navy constantly pulling closer. The Wrecking Balls, however, pulled away with a 4-1 mini-run off a timeout to finish the opening set, 25-20, capped off by a Sarmiento service ace.

The Sailors almost grabbed an extended second set after erasing 5-point hole at 15-20, via a 9-3 run, reaching set point 24-23. Camaganakan saved the set for the Wrecking Balls after an off-the-block hit, forcing a deuce.

The opposing teams then exchanged combination plays; Camaganakan and Paglinawan for Sta. Elena, and Ruzzel Palisoc and Nur Amin Madsairi for the Navy. An off-the-block hit by Peter Torres and a single block by Paglinawan finally ended the set, 35-33.

The Philippine Navy seemed determined to pull off a comeback at the third set, never looking back after an 8-3 run capped by a Dave Pletado running attack to lead by as much as 6, 14-9. The set was eventually ended by a John Macalma drop ball, the backup setter’s lone marker.

The Wrecking Balls were quick to squash the Sailors’ comeback hopes in the final set, creating a 12-6 cushion for themselves. Consecutive errors and mis-hits by Torres and Camaganakan, however, left the door open for Navy, who came as close as 17-16.

An Arjay Onia drop ball shifted the momentum back to the Wrecking Balls, along with Navy miscues by Madsairi and Premaylon. Macalma also had a setting error to end the set, 25-19, and the game, 3-1.

Palisoc and Sundaria, scoring 14 and 11, respectively, were the bright spots for the Navy, who had their final four hopes close to an end.

The Wrecking Balls, on the other hand, keep their podium finish hopes alive with the win.

The Sta. Elena Wrecking Balls (1-2) look to sustain the momentum they gained with this win as they face the Bounty Fresh Soaring Griffins (0-3) on Saturday, June 18 at the Blue Eagle Gym in Katipunan. On the other hand, the Philippine Navy Sailors (0-3) look to upset the Philippine Air Force Airmen (2-1) on Wednesday, June 22.