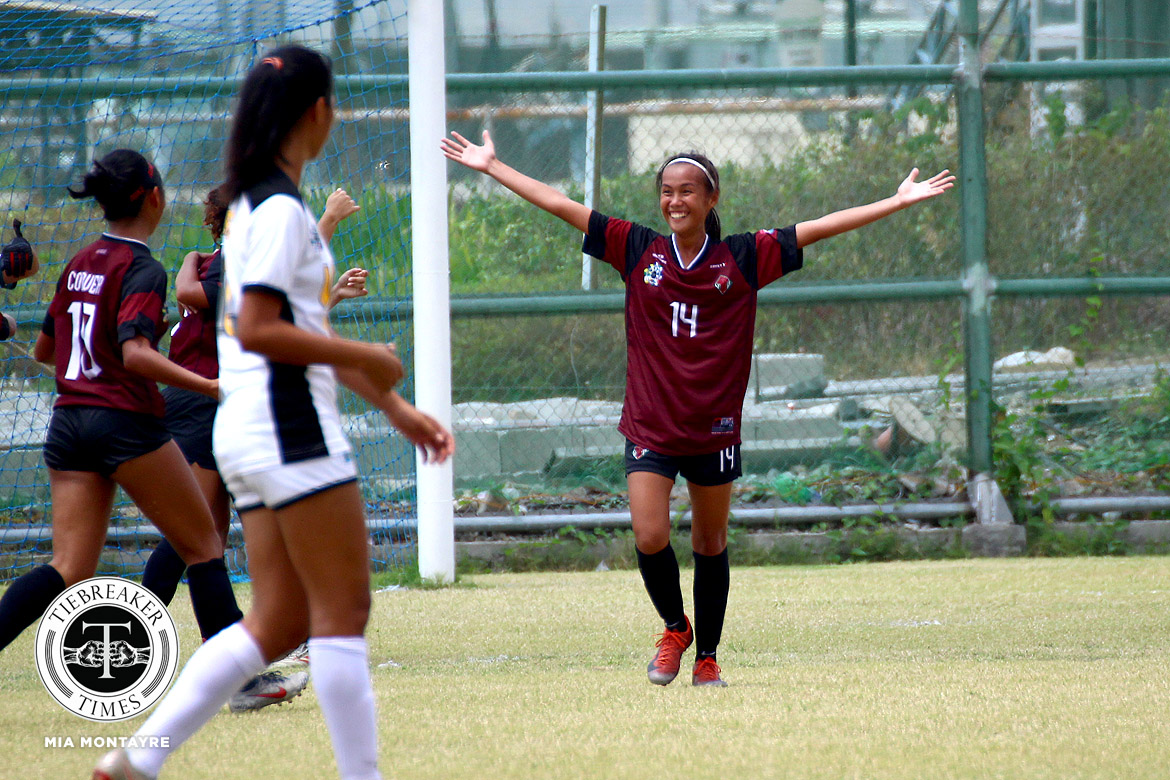 The University of the Philippines Lady Maroons fought tooth and nail, and deservedly brought back to life their chances of returning to the Finals for the first time since UAAP Season 78.

With their opportunity to enter the finals slipping away, the Lady Maroons found a way to keep hold thanks to a 1-0 win over the University of Santo Tomas Lady Booters, Saturday morning, at the Circulo Verde field in Quezon City.

The result raises the Lady Maroons’ points tally to 8 points and they remain in third place. They must win their last game and hope that the FEU Lady Tamaraws suffer a loss in their final fixture to force a playoff scenario.

On the other hand, last season’s finalists UST are eliminated from finals contention and have no games left. The Lady Booters finish the season with 9 points.

DLSU also benefited from UP’s win, as they have secured a ticket in the finals.

“The players really switched it on in the second half. The first half, we were very flat,” lamented UP coach Anto Gonzales.

The Lady Maroons would have conceded in the first half if not for goalie Nicole Adlawan’s heroics. Lady Booter Hazel Lustan found a hole in the UP defense and shot for goal, but Adlawan was there to stop it.

“We didn’t cover the objectives, mainly the aggressiveness, the fight, winning the second balls, winning the fifty-fifty battles. We were a step slower than UST,” he added.

Adlawan’s save and Gonzales’ halftime team talk were the precursors to UP’s improved performance after the first half.

The Lady Maroons’ renewed intensity awarded them a goal in the 57th minute. UP penetrated the UST box and the ball found its way to Sofia Dungca, who scored past goalie Beatriz Sacdalan.

UST were on the ropes, while UP defended and competed like there was no tomorrow. Lady Booters mentor brought in star midfielder Bhebe Lemoran to provoke change, but the Lady Maroons refused to lose.

Lustan had another sniff at goal, this time from a free kick, but she shot it wide. Ultimately, it was the Lady Maroons’ day to savor, and if certain results go their way, then who knows? Maybe they can reach the big dance again.

“They controlled the first half, but credit to the girls for turning things around in the second half. I thought we were more aggressive and the deserved the points today,” Gonzales said.

UP (8 points) finish their elimination round campaign against Ateneo de Manila University on May 8, 2019, 3:00 PM, at the same venue. On the other hand, this was UST’s final match (9 points) in the regular season.