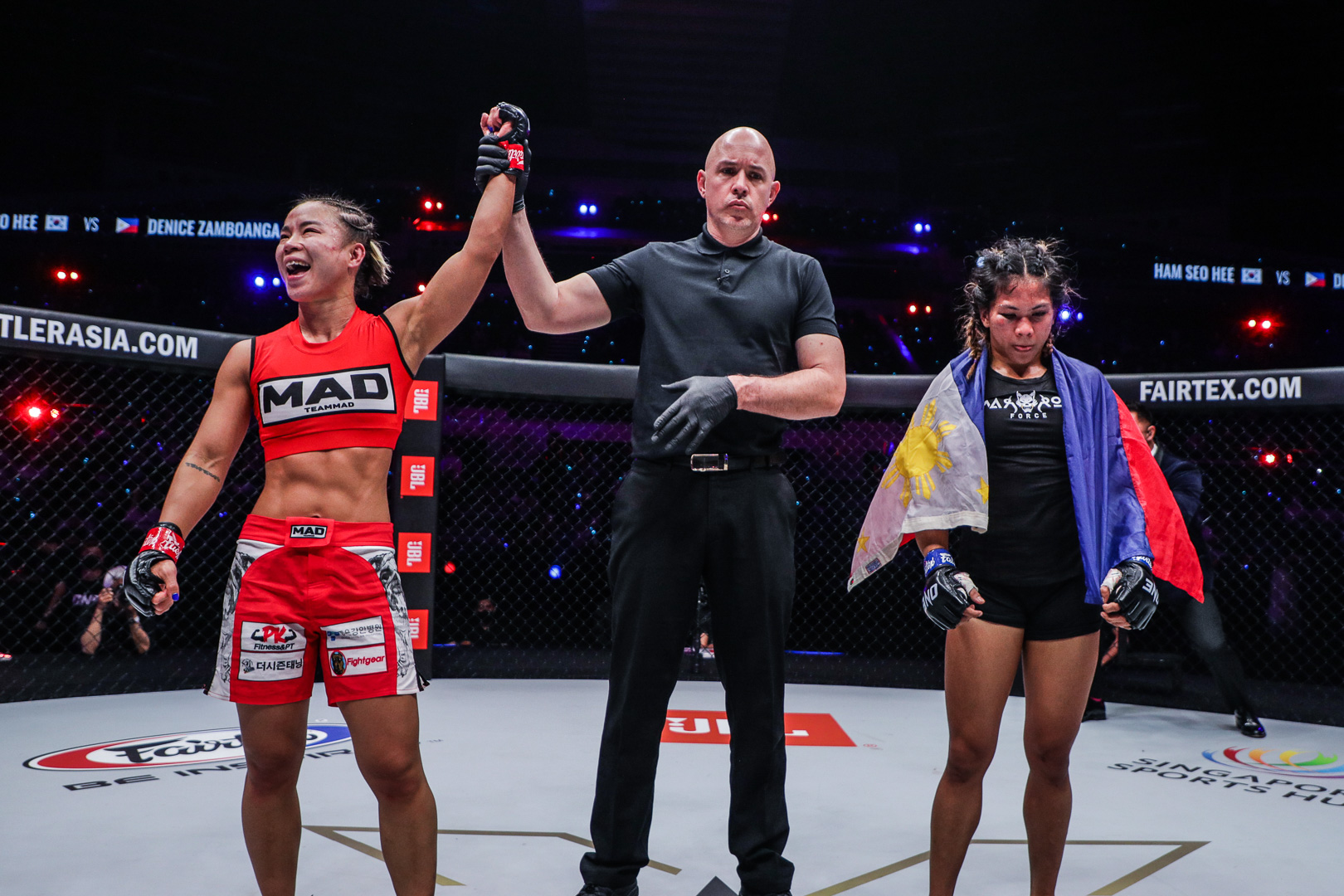 SINGAPORE — Denice Zamboanga fell short in her mission to finally avenge the first defeat of her promising mixed martial arts career. She bowed to arch-nemesis Seo Hee Ham at ONE X: Part II on Saturday, here at the Singapore Indoor Stadium.

Ham clinched the vindication she wanted from her first cage meeting with Zamboanga by beating the Pinay standout by way of unanimous decision,

Ham came out with guns blazing, launching a barrage of punches. That had Zamboanga backpedalling while defending herself by answering every blow from the aggressive South Korean.

As both women continued to trade in closed quarters, an inadvertent collision of heads called the attention of referee Olivier Coste. He called a brief pause to the action.

But as soon as the fight resumed, Zamboanga and Ham picked up where they left off. The two pummeled each other with a torrent of harrowing shots with the intent to inflict significant damage right away.

However, the Filipina opted to switch things up by going for a takedown. She successfully converted with ease.

Though Zamboanga had control of matters on the ground, Ham found a away to get back to her feet. She had her moments in the stand-up trades before taking “The Lycan Queen” for a ride by scoring her own takedown.

After building momentum towards the end of the opening salvo, Ham made sure that she could sustain it in the following round. She took the Filipina again to the canvas and started to rain down elbows and short punches.

Determined to change the complexion of the contest in the third and final frame, Zamboanga exhibited a gallant effort to pacify Ham. She pressured the South Korean in search of a pivotal takedown.

Keen to leave no doubts this time around, Ham denied Zamboanga of her wish and landed her own takedown instead.

Ham finished the remaining minutes of the final round with a sturdy top control. She put Zamboanga on the receiving end of her ground-and-pound.

By vanquishing Zamboanga at ONE X, Ham stretched her remarkable streak of wins to eight. Moreover, she moved up to a 25-8 record.

On the other hand, Zamboanga absorbed her second consecutive defeat in the span of six months. She falls to an 8-2 win-loss card.