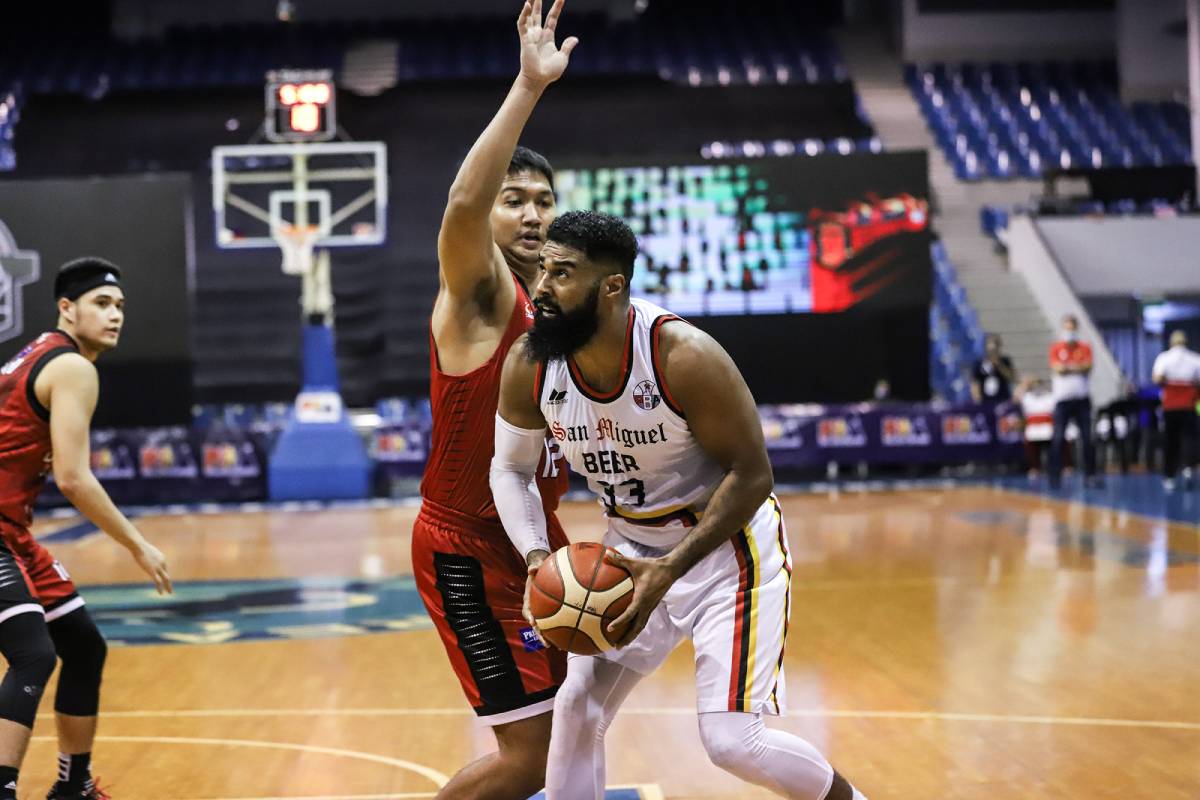 Mo Tautuaa led the reigning, five-time champions with 20 points and 11 rebounds in the win that hiked their card to 6-4, creating a four-way tie with Meralco, Alaska, and Magnolia at the fourth spot of the standings.

The Beermen, who atoned for the humiliating 90-124 loss they suffered in the hands of NLEX last Friday, would need to win its last game versus NorthPort on Tuesday to at least be in the middle of the last eight for the next round.

Catching up with SMB, though, is Rain or Shine (5-4) and the Road Warriors, who improved to 4-5 after a 1-5 start — their dominant victory over the powerhouse squad was actually their third consecutive.

“I think the players were motivated with our situation right now because our status was, we have to win our last two games or be eliminated,” said head coach Leo Austria post-game.

“There’s a logjam in the middle of the standings and those teams at the bottom are slowly catching up. With this win, I think we have a little advantage,” furthered the multiple-time Coach of the Year.

Marcio Lassiter had 12 points, while Chris Ross notched a double-double of his own with 11 points and 14 rebounds together with four assists and four steals. Bam Gamalinda chimed in 11 markers and 10 caroms.

“So we just wanted to come out and give a better effort. I told the guys before the game that last game we showed zero effort. And if we showed effort today, we’ll probably come out on top,” said Ross.

San Miguel was actually behind, 11-17, early in the opening frame until it uncorked 12 unanswered points — punctuated by a Von Pessumal lay-up — to take a 23-17 lead with 3:12 on the clock.

The Beermen would sit in the driver’s seat the rest of the way and they would even pull away in the second chapter before erecting a wide 20-point lead, 56-36, after an Alex Cabagnot bucket early in the third canto.

The Gin Kings, though, threatened and knocked to within just three, 53-56, following a Scottie Thompson triple with 4:18 to go in the same quarter, but Gamalinda, Cabagnot, Lassiter, and Ross restored order to secure the W.

Japeth Aguilar had 13 points to lead Ginebra, who saw the end of its three-game streak and dropped to 7-3. It will have to win its last game versus the also-ran Terrafirma on Monday, Nov. 9, to lock the top spot.

Scottie Thompson nearly had a triple-double with 10 points, nine rebounds, and 10 assists, while Aljon Mariano had 11 and 12 in the loss that saw Stanley Pringle held to just seven points and LA Tenorio scoreless in 26 minutes.