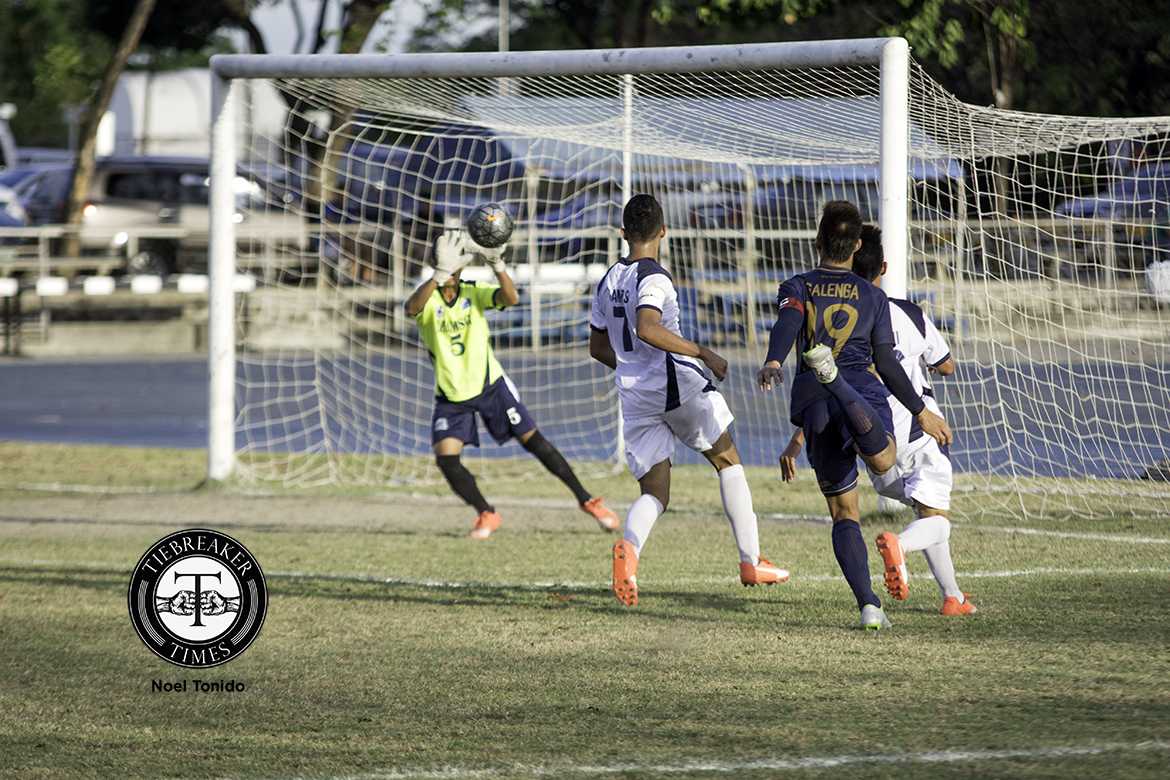 The National University Bulldogs enjoyed a seven-goal demolition of the hapless Adamson University Soaring Falcons in their second round UAAP Season 78 Men’s Football Tournament clash at the Moro Lorenzo field in the Ateneo de Manila University.

It was a simply a poor showing by the Soaring Falcons as the Bulldogs simply mauled them into submission. The Jhocson Street-based booters just played their regular football and Adamson lacked the fight in them to repel the Bulldogs.

As soon as the game kicked off, it felt quite inevitable that the Bulldogs were going to take all three points with how they bombarded Adamson’s backline. True enough, Salenga led the charge and he slalomed his way into the Soaring Falcons’ defense to calmly put the ball at the back of the net at only the 5th minute of the match.

That first goal made the Bulldogs thirst for more as they relentlessly pushed for more goals. Salenga was able to pick up his second goal at the 15th minute after beating Adamson’s offside trap to round the defense and goalkeeper Carl Viray for an easy finish towards the bottom left corner.

Adamson struggled to get out of their half. In one of the few instances they were able to do so, the Soaring Falcons had a free kick but it was headed wide. The Soaring Falcons relied on set-pieces but the Bulldogs’ defense held firm. The Bless Brian brothers, Jumo I and Jumo II, had chances to score but Perocho just needed to perform routine saves.

After that, it was all National U. Salenga, Colina, and Abalunan all shot wide and continuously sought a third goal before halftime. The Bulldogs got that third goal four minutes before the break. Some patient passing led to an opening for Bungay who made to mistake when he was one on one with Viray. NU had a huge 3-0 lead at the half with Adamson left to wish the game was over.

More aggression was shown by Adamson in the first few minutes of the second half but the Bulldogs continued to control the field. However, the Soaring Falcons’ defense was still reeling from a bad performance in the first half and the trauma was still obvious. Some good ball movement allowed Bungay through on goal but his chip was too strong and it went over the goal.

Then the nine minutes of hell came for Adamson.

From the 58th minute onwards up to the 67th, the Bulldogs just went goal crazy and it was very much deserved for all their dominance.

Adamson’s defense fell asleep at the 58th minute and Salenga needed to just tap the ball in from a Bungay corner. Six minutes later, Salenga got his fourth goal in the match. Some patient passing led to an opening for Salenga and he powered his shot beyond a powerless Viray at the 64th minute. Just a minute later, though, Colina claimed NU’s sixth goal after some poor defending from Adamson.

Valenzuela turned in the Bulldogs’ seventh goal at the 67th minute after some intricate play allowed him to run to the box and finish the move beyond an unfortunate Viray. Adamson then tried to get a consolation goal but NU never looked like conceding. The referee mercifully didn’t add any stoppage time minutes and called for time.

#ReadMore  NU rallies back against Arellano to post straight win

The result elevated NU at fourth place with 12 points, the Bulldogs’ superior goal difference the determinant against Ateneo and UP. Adamson were still left at seventh place, the Soaring Falcons’ win over UE separates them from the latter. In addition, Salenga’s four goals propelled him as the league’s highest scorer with 9.

The next matchday for both teams will be on March 20, 2016 (Sunday) at the McKinley Hill Stadium in Taguig. NU will face UE while Adamson will go up against Ateneo.