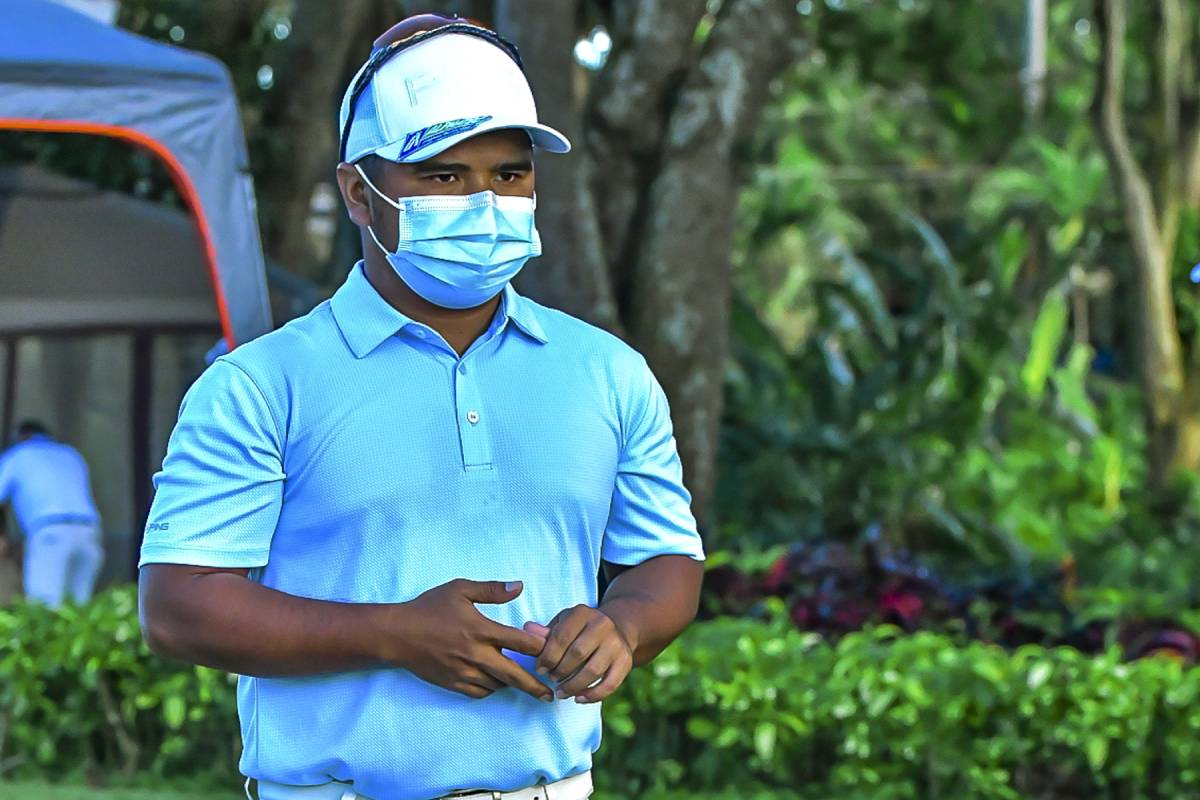 Rupert Zaragosa went on an early birdie-binge and shot a 69 then pounced on Joenard Rates’ late meltdown to grab a one-shot lead over the erstwhile frontrunner and two others halfway through the rich ICTSI Riviera Invitational Challenge at the Couples course in Silang, Cavite, Wednesday.

What he lacked in height, the 5-foot-2 Zaragosa made up with his superb shotmaking and putting as he birdied three of the first holes then held sway in tough conditions, finishing with a two-birdie, two-bogey game the rest of the way for a 34-35 and a 141.

“I hit it pretty good off the mound and got some good lies for approach shots,” said Zaragosa, whose opening 72 was marred by a double-bogey on No. 11, a par-5 hole which he birdied yesterday to storm ahead of the compact field in pro golf’s resumption after an eight-month break due to pandemic.

Aware of the expected charge of the top guns in the last two rounds, the 23-year-old Zaragosa stressed the need to play it smart to gain a crack at a first pro crown which he blew when he lost in a five-man playoff in the PGT Asia Pradera Verde last January.

“I’ll just go for the fairways and greens, minimize my mistakes and make the most of my chances,” said the former many-time national champion, one of the very few who had tapped a caddie in coach-father Boyet.

After an impressive opening 69 in the Tour’s return in the new normal, where the pros do away with the caddies and abide by the strict health and safety protocols, including wearing of face masks, the 5-foot-3 Rates scrambled to salvage a one-under card after 16 holes and hold on to the lead.

But he fumbled with back-to-back bogeys for a 73, enabling the other diminutive shotmaker to take command of the P2.5 million tournament, the first of two events put up by ICTSI to mark the PGT’s restart. The other championship is slated for December 8-11 at the adjacent Langer layout.

Still, Rates stayed within a shot at 142 in a tie with another surprising pair in Fidel Concepcion and Rico Depilo, who fired 68 and 71, respectively, as the fancied bets continued to figure out the course while trying to recover from the effects of a long layoff since mid-March.

In the accompanying Ladies PGT, Princess Superal slowed down with a 72 after a 67 but stayed safely ahead by five over rookie Abby Arevalo heading to the final round of the 54-hole championship.

After sparkling with an eagle-spiked five-under card in the first round capped by a birdie-birdie finish, Superal struggled to try and find her rhythm and range in a late tee-start, hitting just two birdies on Nos. 7 and 18 against bogeys on Nos. 1 and 15.

But with a safe margin over Arevalo with a 139 total, the reigning OOM winner could be on her way to adding the crown to her long list of victories that have marked her winning campaign before the pandemic.

Arevalo actually pulled to within four with a birdie on No. 13 but the 2020 Philippine Ladies Open titlist bogeyed the 15th then birdied the next to shoot the day’s best of 71 for a 144 aggregate.

While Zaragosa banked on a solid start to seize control, Concepcion turned in a late charge to get into the mix alongside Rates and Depilo, the unheralded Davaoeño hoping to sustain his charge against the expected assault of the favorites in an attempt to finally gain a crack at a first crown in turning pro at 31 in 2004.

Concepcion, a former Southern Utah Univ. standout who grew up in Sydney and placed 15th in the Order of Merit in his PGT debut last year, actually hit two birdies in the first 11 holes then bounced back from a bogey misfortune on No. 12 with three straight birdies from No. 13 for a 35-33.

But behind them is a slew of seasoned campaigners ready to pounce in today’s pivotal round, led by Dutch Guido Van der Valk, the last player to win a PGT title in The Country Club Invitational before the global health crisis disrupted play in all sports all over the globe.

Van der Valk missed joining Rates and company at second with a last-hole bogey, his 71 instead dropping him to joint fifth at 141 with multi-titled Miguel Tabuena and Tony Lascuña, who both matched par 72s, and young Ira Alido, who failed to duplicate her rousing windup of three birdies in the last six holes for a 70 Tuesday with two bogeys against a birdie in the last seven for a 73.

Albin Engino also fumbled with a 73 for solo ninth at 145 while 2018 PGT Order of Merit winner Jobim Carlos rebounded from a 75 with a 71 to wheel back into contention at 146 with Gerald Rosales, who carded a 72.

Angelo Que, one of those tipped to crowd for the top P350,000 purse in the first of two events in PGT restart owing to his power, talent, and experience, made two bogeys in a birdie-less 74 that dropped him to joint 12th at 147 with Korean Park Jun Sung and Richard Sinfuego, who both fired 73s.