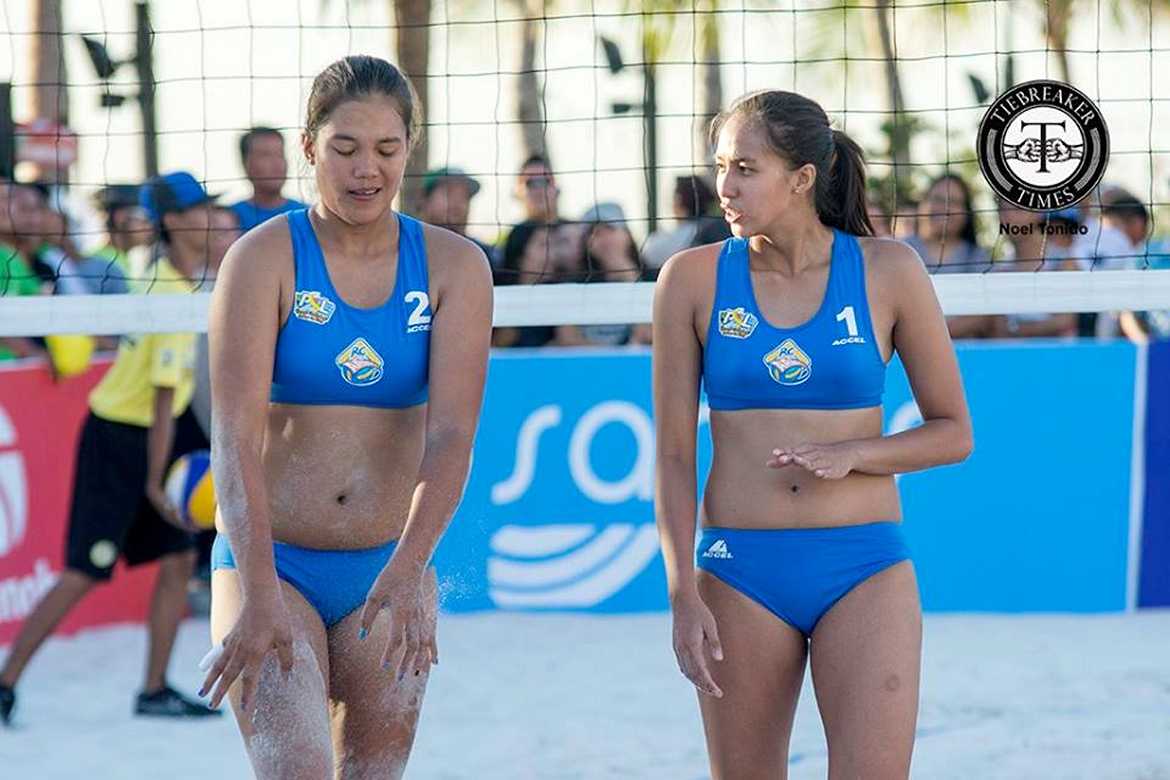 The RC Cola-Army A duo of Jovelyn Gonzaga and Nene Bautista walked away with an unblemished slate after Day 1 of the Philippine Super Liga Beach Volleyball Challenge Cup 2016 Saturday at the Sands SM By The Bay in Manila.

RC Cola-Army A first survived a gallant challenge from the Pons-Atienza tandem, scoring a hard-fought 19-21, 21-16, 15-13 win. FEU came off a 21-14, 21-12 win over Meralco’s April Ross Hingpit and Jonafer San Pedro before the duel against the much-experienced Army A side.

FEU raced to a 12-9 lead in the first set, with Pons making good use of placement shots to score against Army A. Errors from Army A made it 19-16 for FEU before Gonzaga scored three straight to pull within 20-19. But a kill by Pons gave FEU the first set.

FEU once again held a 12-9 lead in the second set, before Gonzaga got going on offense to tie it at 16 apiece. Back to back spikes by Bautista followed by an ace from Gonzaga gave Army A the 19-16 lead before they closed it to force a deciding third set.

In the third set, a hit by Pons enabled FEU to tie the count at 13 apiece, before Bautista scored two straight to complete the come from behind win for Army A.

The team went on to take the opening set before using an 8-1 run in the second set to pull away and take a 15-9 lead and never look back.

Aby Marano did not look like a newcomer at all in her professional beach volleyball debut as she and her teammate Danika Gendrauli of F2 Logistics scored an easy 21-10, 21-16 win over Petron Sprint 4T’s Maica Morada and Ces Molina in Pool B.

F2 Logistics took a 13-5 lead in the opening set, taking advantage of Petron’s poor defense. A spike by Gendrauli made it 15-5, before a block by Marano extended the lead to 19-8.

In the second set, F2 Logistics once again took control, jumping off to an 11-3 lead before the tandem of Morada and Molina tried to fight back, cutting the lead down to 14-11. But F2 Logistics responded with five straight points to make it 19-11.

Cherry Rondina was also phenomenal in her PSL beach volleyball debut, leading Foton to a masterful 21-4, 21-7 win over Accel Quantum Plus’ Princess Listana and Aileen Abuel.

Rondina joined hands with veteran Patty Orendain as the duo went to an 18-3 start in the opening set. The team never went threatened against Accel to book the win in Pool C.

Pineda wasted no time in her return to the sands, doing a good job from the service line as Accel again struggled with its reception. Maizo-Pontillas took care of the rest of the match, providing the team different attacks in the easy victory.

Day 2 of the tournament will be held on Saturday, May 14. For full album >>  Philippine Superliga Beach Volleyball Challenge Cup 2016 Day 1 Album