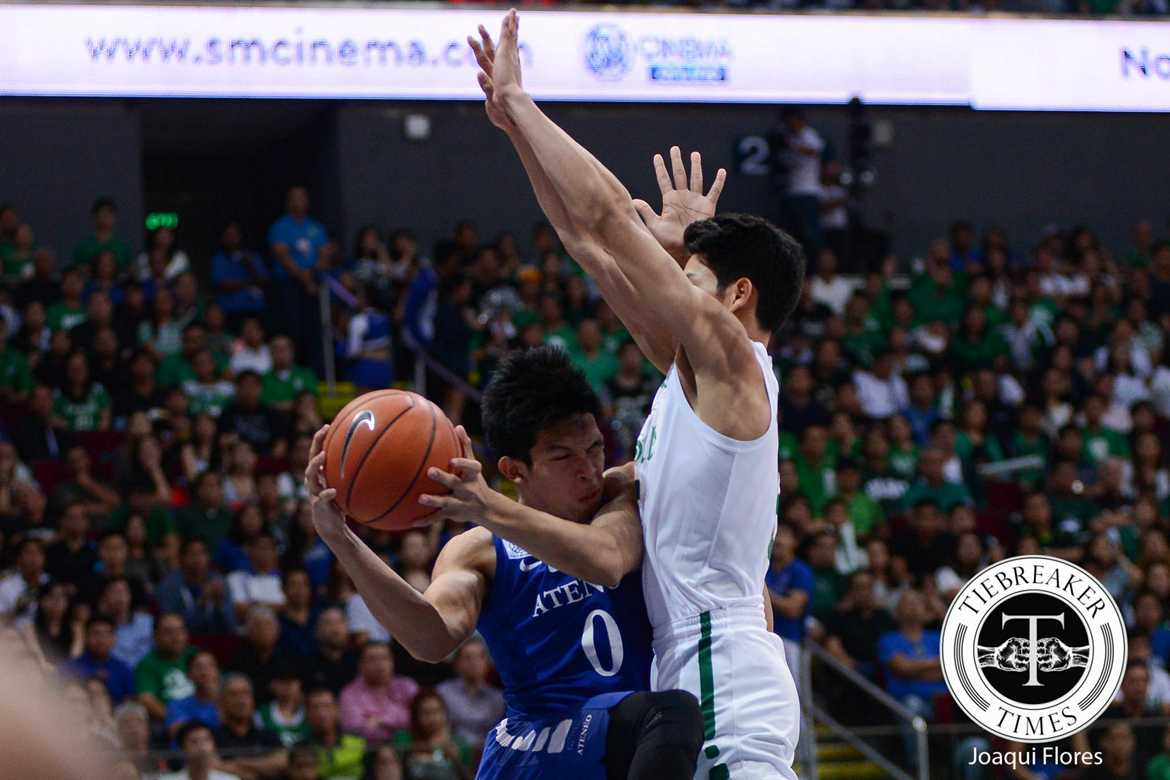 The Ateneo de Manila University Blue Eagles ended the UAAP Season 79 Men’s Basketball Tournament first round on a whimper, as they succumbed to an 81-97 loss to archrivals De La Salle University Green Archers.

It proved to be a long evening for the Blue Eagles, as the Green Archers simply outplayed them at the SM Mall of Asia Arena in Pasay City.

One of the key players for Ateneo in that game was Thirdy Ravena. Ravena produced a double-double of 11 points and 11 rebounds in 19 minutes of action.

“Importante lang ngayon we work on our weaknesses in this game and come back stronger sa second round kasi we have one more try,” commented the former UAAP Juniors MVP after the game.

Perhaps the start of Ateneo’s collapse in that game occurred in the second quarter. La Salle outscored Ateneo 33-16 in that period, and the Green Archers never looked back.

“We prepared for them by trying not to give them offensive rebounds and turning the ball over because that’s where they get most of their points,” concended the third-year student athlete.

That second quarter was also notable for Ravena’s unsportsmanlike foul on La Salle rookie Ricci Rivero. Ravena was adjudged to have hit Rivero during play and he was substituted shortly after the incident.

“That happens, it’s part of the game. May magandang tawag, may pangit na tawag. Move on lang.”

One of the reasons for Ateneo’s loss was La Salle’s vaunted “mayhem” pressing system. The Blue Eagles were forced to make 30 turnovers, while the Green Archers only had 16. The importance of that wasn’t lost on Ravena.

READ  Despite all the blessings and accolades, birthday girl Alyssa Valdez remains focused

Nevertheless, all should not be lost for Ateneo, as they end the first round with a decent record of four wins and three losses. That 4-3 record might even be considered an achievement, since no one had expected the current edition of the Blue Eagles to do this well.

“I don’t think they expected a 4-3 (win-loss record) from us. I’m actually pretty okay with our result.

“Not a good way to finish the 2nd round, but it’s pretty good, it’s okay,” concluded Ravena.

A loss to La Salle will always leave a bitter taste in Atenean mouths, but the Blue Eagles have started Season 79 fast. Come the second round, there’s no reason why Ateneo can’t go all the way given how quickly Ravena and the rest of the Blue Eagles are improving.