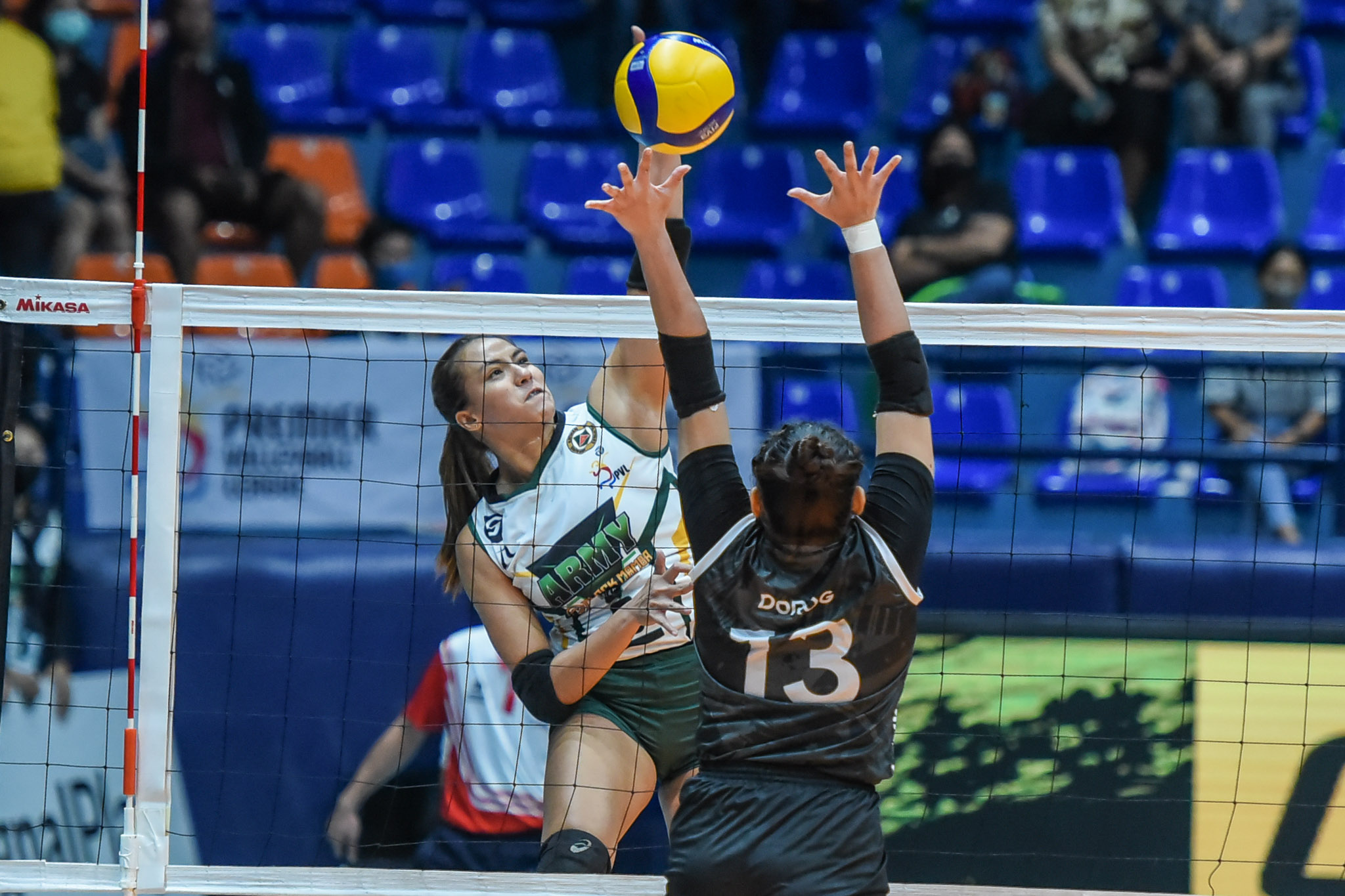 Kungfu Reyes finally made his return as Army-Black Mamba strengthened its playoff bid by eliminating Chery Tiggo, 25-20, 25-23, 25-22 for its third win in the 2022 Premier Volleyball League Invitational Conference at the FilOil Ecooil Centre, Tuesday.

Reyes, who missed the Lady Troopers’ last three games due to COVID-19, steered his team to a bounce back win which put them at solo third with a 3-2 win-loss slate. During that span, the team won two consecutive games before losing to PLDT last Saturday.

The Lady Troopers took advantage of the misfiring Crossovers and established a seven-point advantage, 22-15, after consecutive attack errors coming from Justine Dorog, Mylene Paat, and Cza Carandang in the third frame.

Caradang eventually atoned for her mistake, scoring two kill blocks on Ging Balse and Joanne Bunag to power a 4-0 run that sliced Army’s lead to just three points. However, a double contact was called on Jasmine Nabor in the following play while Ivy Perez sneaked in an ace to put the Lady Troopers at match point.

Balse and Jeanette Villareal tried to end the match but could not get the ball over the net. Arianne Layug then sliced the Army lead to just three points anew before Bunag brushed the ball off Chery Tiggo’s defenders to bag the win in just three sets.

The Crossovers, who were coming off a huge three-set win against Petro Gazz last Thursday, are set to miss the playoffs after suffering their fourth loss in five outings.

Jovelyn Gonzaga was the lone double-digit scorer for the Lady Troopers with 15 points on 12 attacks and three blocks to go along with 18 excellent digs and seven excellent receptions.

Perez, meanwhile, delivered 18 excellent sets laced with six points. It was a balanced offensive attack for Army with a total of eight players scoring three points and above.

In the opener, the Lady Troopers pulled away from a neck and neck encounter late with Anne Esguerra scoring three points in a 6-2 run that handed Army a 23-18 advantage. Cza Carandang and Shaya Adorador kept the Crossovers afloat but a service error from EJ Laure, followed by an ace from Ging Balse, helped seal the opener for the Black Mamba-backed squad.

Both teams figured in another tight encounter in the second set, finding themselves tied at 23-all. Adorador tipped the ball but hit the antenna which placed the Lady Troopers at set point while Ivy Perez put on the finishing touch from the service line.

Adorador and Paat paced the Crossovers with 11 points apiece. The former also had 11 excellent receptions.

Army will finish its elimination round campaign against Creamline on Saturday at 11:30 AM. Chery Tiggo will end its Invitationals run against the same time on Thursday at 5:30 PM.