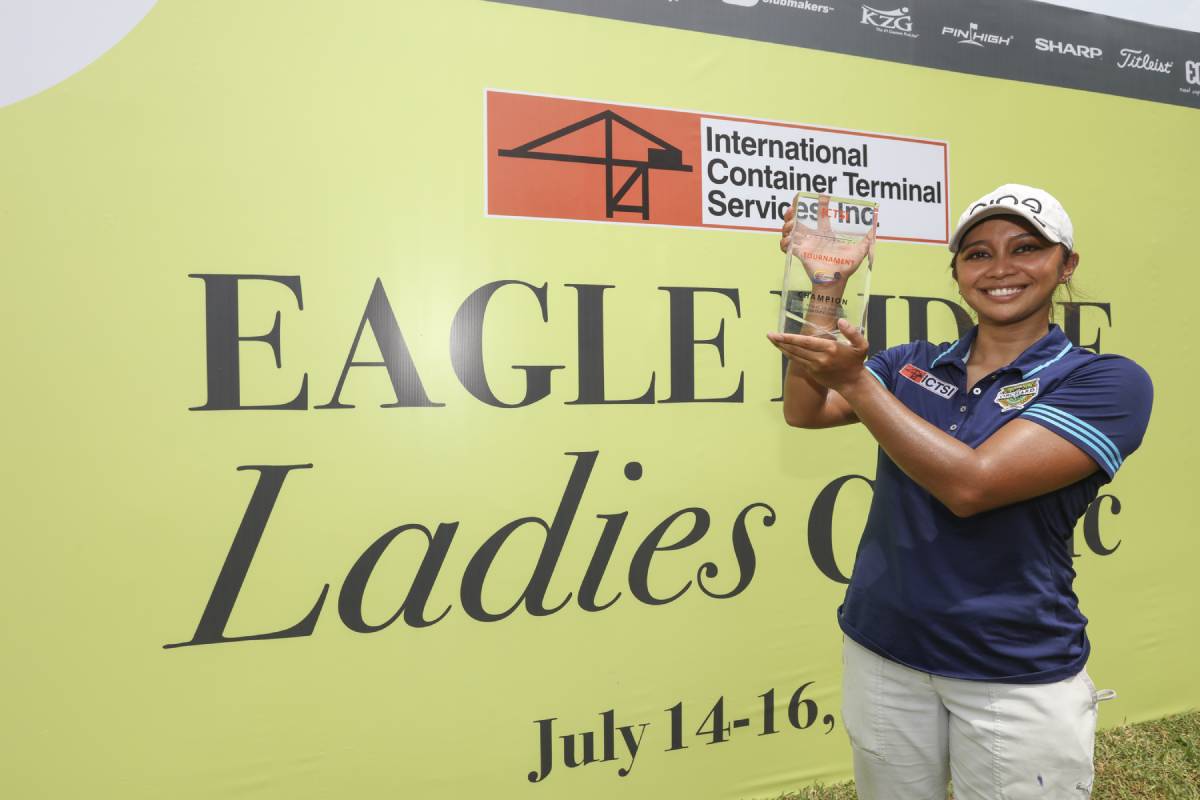 Bracing for a tight finish, Princess Superal cruised to a trouble-free three-stroke victory instead, her even par 72 proving enough to dominate the field in the ICTSI Eagle Ridge Ladies Classic and complete a back-to-back title feat on the Ladies Philippine Golf Tour.

With no one able to mount a serious challenge in calm conditions at the demanding Norman course in General Trias, Cavite Friday afternoon, Superal hardly exerted any effort to press her charge after gaining a two-shot lead over Chihiro ikeda in the weather-delayed second round Thursday as Chanelle Avaricio’s rally fizzled out with a bogey on the 12th after moving to within three with birdies on Nos. 2 and 7.

Ikeda pulled to within one with a birdie on the par-5 No. 5 for the third straight day but the Fil-Japanese yielded two strokes on No. 9 and bogeyed the 10th and never seriously threatened again.

Taking the cue, Superal wittingly went for a routine par-game to shun any risks that could possibly result from an attacking kind of game although she still shot down a couple of birdies on a solid tee shot on the par-3 14th and a superb approach to within six feet on No. 16 to go unassailably ahead.

Not even her closing back-to-back bogeys on Nos. 18 and 1 and Avaricio’s hot finish could derail Superal’s march to a cruising win after squeaking out a one-stroke victory over Avaricio in last week’s ICTSI Sherwood Ladies Challenge as the 2019 Ladies PGT Order of Merit winner pocketed another P112,500 after a two-under 214 total that included a 72 and 70.

“I just focused on my goal to get into a certain score and didn’t mind who was making a move,” said Superal. “But I struggled with my putting at the front and missed a number of birdie chances.”

Unlike Superal, Avaricio birdied the last two holes but could only finish with a 70 for another runner-up effort in LPGT’s resumption in new normal after a three-month hiatus. The Alabama State U product ended up with 217 and received P75,000.

Ikeda limped with a 75 and finished third at 219 worth P60,000 while Harmie Constantino, who foiled Superal by two at the adjacent Aoki course last March but who struggled in the first two days, rallied with a 71 to salvage fourth at 220 and took home P56,250.

Arnie Taguines closed out with a 75 and ran away with the low amateur honors at 224 for solo fifth while Daniella Uy, who led in the first round of the 54-hole second leg of the six-tournament swing in Cavite and Batangas organized by Pilipinas Golf Tournaments, Inc., wound up sixth at 228 after a horrible 80.

Sunshine Baraquiel, who also stayed in early contention with an opening 72, hardly improved from a second 80 with a 78, ending up seventh at 230 while Marvi Monsalve placed eighth at 234 after a 79 and last week’s low amateur Burberry Zhang carded a 77 for ninth at 235.

Superal parred the first 12 holes from No. 2, somewhat giving her rivals some room for a comeback. But only Ikeda could come close within a shot as Avaricio failed to regain a stroke she yielded on No. 12 and even dropped another on No. 16 to fall behind by four again.

But after Ikeda stumbled and dropped three strokes linking both nines, Superal struck hard with a birdie on No. 14 then added another two holes later to all but wrap up another championship, actually her third in pandemic, counting her Riviera (Couples) victory late last year.

Meanwhile, the ICTSI-sponsored circuit takes a break this week and will return for back-to-back Riviera stops on July 28-30 (Langer) and on Aug. 4-6 (Couples) with the action moving to Splendido Taal Golf Club on Aug. 18-20 and then to Tagaytay Midlands on Aug. 25-27.