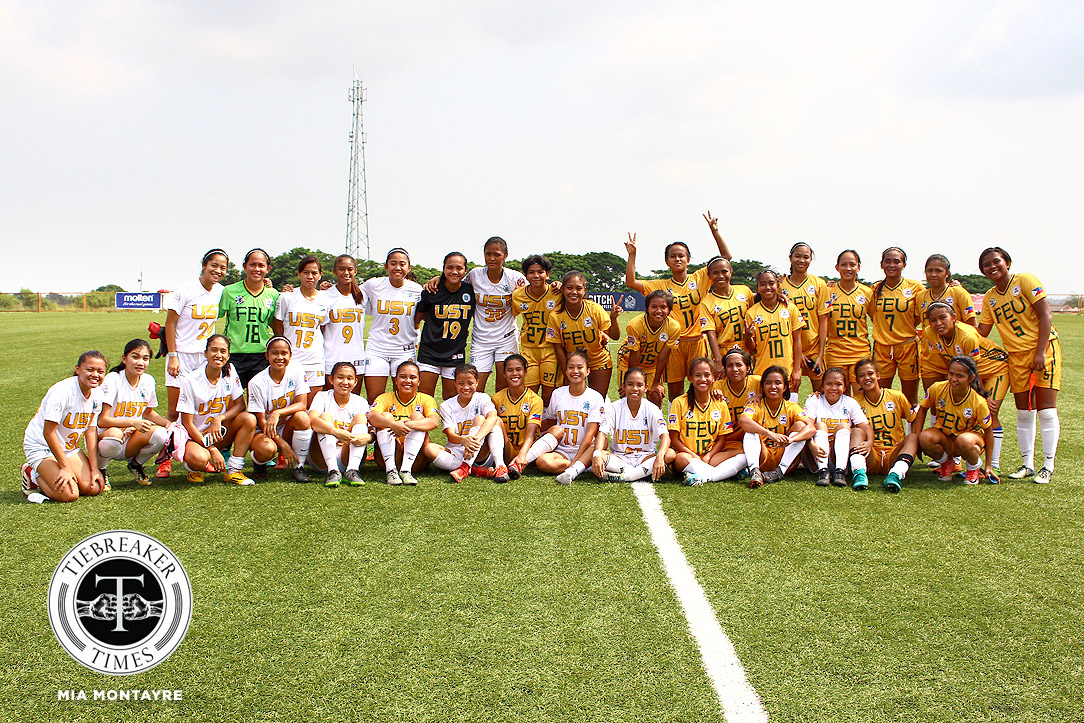 The University of Santo Tomas Lady Booters have been enjoying a winning preseason until last Saturday when the Far Eastern University Lady Tamaraws dealt them their first loss.

Meanwhile, Isabella Bandoja is enjoying a breakthrough tournament herself where her five goals not only handed Tuloy FC the victory but has also made her the best single-season scorer in the two years of the league.

Hiraya FC put on a clinic against shorthanded UP 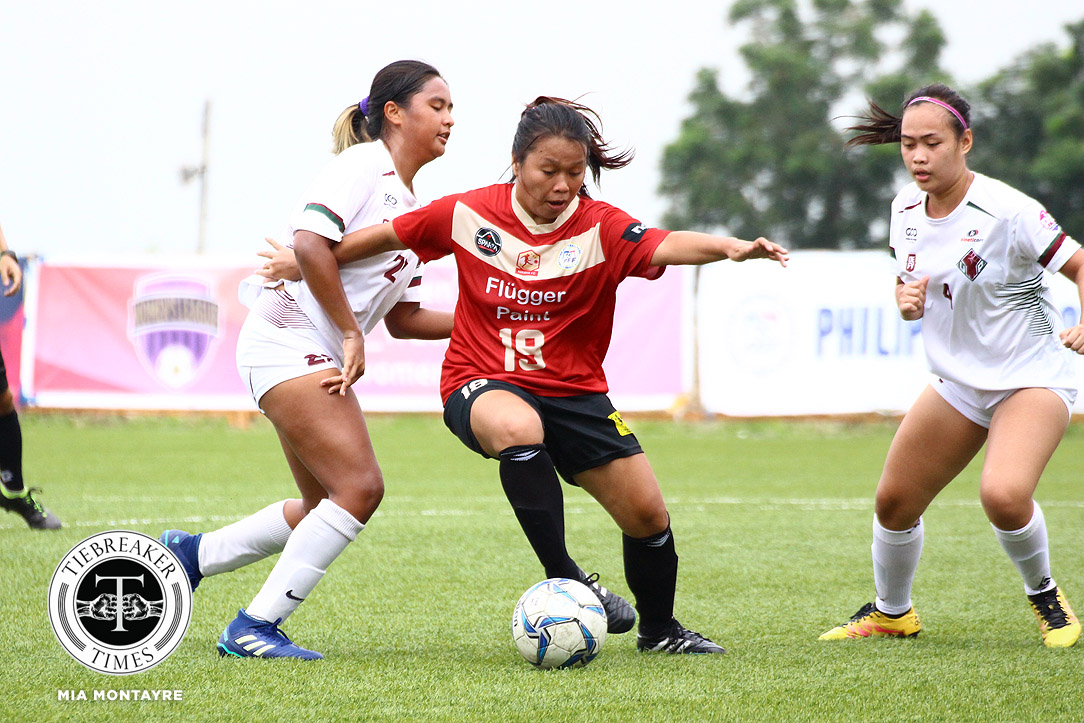 For the second match in a row, it was again up to the reserve team of the University of the Philippines Lady Maroons to suit up and thus they were easy to pick apart by Hiraya FC, beating them 9-0.

An own goal inside fourteen minutes was the beginning of a nightmare for the Lady Maroons which might have raised the killing instinct of Hiraya. Erika Casas scored a quick brace in the 24th and 32 minutes.

Richelle Placencia added a 51st minute goal, while Natasha Alquiros contributed a pair in the 58th and 81st minutes.

The additional three points puts Hiraya back in fifth place, but coach Philip Dinglasan did not see a good reason to celebrate.

“I would have preferred a match na of the highest level that we could give. That’s the only way that we’re going to improve,” he said, alluding to the absence of UP’s first team and his pity for the beleaguered reserves.

“It’s really disheartening when you play these kinds of games. You don’t know if the positives will outweigh the negatives. If we sacrifice the quality then we’re not moving forward, we’re moving back. And we don’t want to move back, diba we always want to progress.”

Despite weak opposition, Hiraya used this match to gain confidence on their end especially for their next crucial fixture.

“[In a way,] we’re lucky because yung mga players namin na hindi maka-score finally nandun na sila sa scoresheet. We also used this game to fix some things in-game to bring to that OutKast game, which is important for us and OutKast,” Dinglasan added.

La Salle hangs on for win in Archer derby

The De La Salle University Lady Archers looked like they are also one of the teams significantly affected by the loss of their key players to the national team after barely winning against bottom-dweller Green Archers United FC, 2-1.

Rocelle Mendaño put DLSU up in ten minutes with a stunning golazo at a tight angle off Arantxa Del Mundo’s pass near the endline. Mendaño followed it up with another stunner at near halftime when she danced around defenders en route to a brace goal.

But Green Archers United FC were not an easy foe with many former Lady Archers filling their ranks. The former veterans of La Salle turned the tide in the second half culminating in a fancy one-on-one goal from Maria Layacan in the 67th minute that beat top collegiate keeper Natasha Lacson.

This prompted GAU to start supplying Layacan with plenty of scoring opportunities and had she converted any of them, it would have been disastrous for DLSU. Yet the ladies of Taft hung on to survive the La Sallian clasico.

“Quality of the games are pulled down. I just hope, changes will come soon. Change can come if change will come to the people handling it. Everything should be a football decision,” the DLSU coach added. 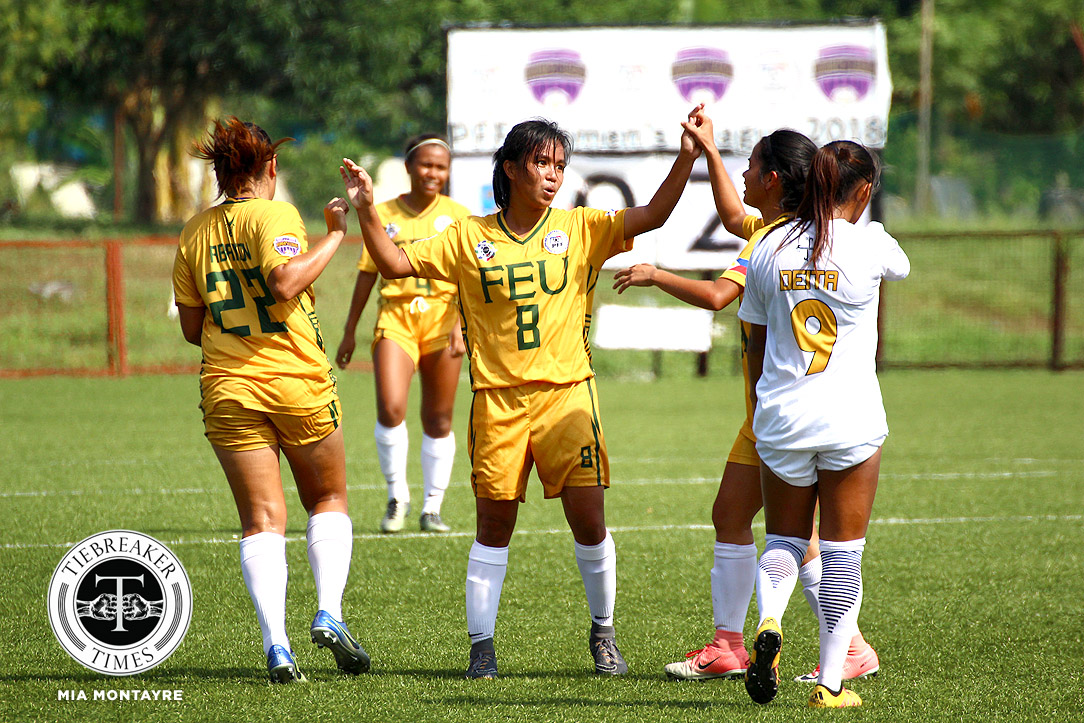 The Far Eastern University Lady Tamaraws have been going through an up-and-down preseason with frustrating performances particularly against club teams, but all that may be forgotten when they shocked league leaders University of Santo Tomas Lady Booters with a 3-0 win.

It was shock-and-awe right from the get-go with FEU scoring goals moments after kickoff. Bia Requerme took advantage of a high ball and headed it over keeper Carmela Sacdalan in the first minute. Then Roselle Lecera was just in the right spot at the right time in the very next minute when the ball trickled her way in front of a wide open goal.

The ladies of España eventually settled down to scare their neighbors from Morayta with counterattacks but none of them found the back of net thanks to Khryss Kaye Dacanay.

With UST getting impatient and flustered having never faced an 0-2 hole before, Suettie Simoy provided the proverbial dagger with a sensational free-kick in the 59th minute.

For the first time in a long time, the Lady Tamaraws put on the widest of smiles after the proceedings including their coach Let Dimzon.

Critical of her players in previous matches for their lack of maturity, Dimzon saw promising signs from them this time around.

Despite being on the winning end, the FEU coach still felt some sympathy towards the league leaders and spoiling a then perfect record. 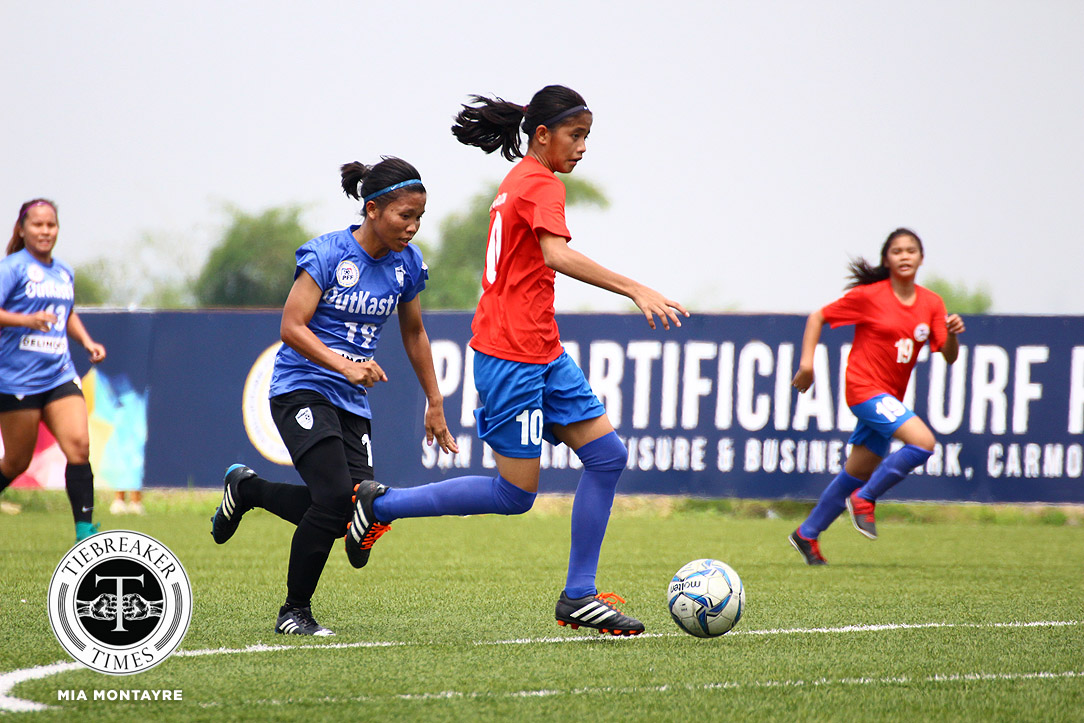 OutKast FC were hoping to get out of a slump but Tuloy FC’s Isabella Bandoja had other plans when she took over to not only bag a 6-3 victory but to also grab a scoring title.

It was clear Bandoja was a woman on a mission for this match, and that was to break the league record for most goals scored by an individual player in a single season. Right until this game, DLSU’s Kyra Dimaandal (from the previous season) and UST’s Shelah Mae Cadag shared the record at 21 goals. Bandoja’s total before the game was 17, she needed only five to clinch it.

She went to work immediately, attacking OutKast’s goal relentlessly which the latter were able to defend in the beginning highlighted by an open goal shot that was saved by defender Aira Ilan.

But Bandoja would not be denied and got her breakthrough in the 33rd minute. It was an opening of floodgates of sorts as she plundered it with two more successive goals to end the first half.

Aware that she only needed one to tie and two to break the record, Bandoja’s hunger never subsided.

Substitute Jennizel Cabalan attempted to snap the focus out of Bandoja with an unstoppable strike two minutes after restart but Tuloy’s lanky striker answered back three minutes later. Jonalyn Lucban’s 63rd minute goal could have broken OutKast’s resolve but Cabalan kept it alive with two more goals in the 75th and 82nd minutes.

With the record within reach, Bandoja faltered at first, squandering chances. Aware that her team is helping Bandoja beat the record, Hazel Arce knew to only concentrate on Bandoja and the OutKast goalie blocked a number of attempts.

Yet the stars seemed to have aligned for Tuloy’s Number 10 and she found the goal that she needed in injury time.

Her coach Rey Cuenco is just as happy, and thinks the opportunity would be good for her.

Cuenco was also delighted with his team, at how they hit two birds with one stone.

OutKast have now dropped out of the top five, now sixth, while Tuloy are in fourth just behind FEU.

The PFF Women’s League is on its final lap with all teams scheduled to be playing in the coming weekend at the PFF National Training Centre in Carmona, Cavite.

On Saturday, November 3, the University of the Philippines will look to get points from De La Salle Zobel at 8:00 A.M. with Ateneo de Manila University battling Green Archers United FC at 10:30 A.M.

On Sunday, November 4, University of Santo Tomas will virtually fight for the title with De La Salle University at 8:00 A.M. OutKast FC and Hiraya FC will face off at 10:30 A.M, then Tuloy FC and Far Eastern University will close it out at 1:30 P.M.

The games will be on livestream at http://pff.org.ph/pff-tv.