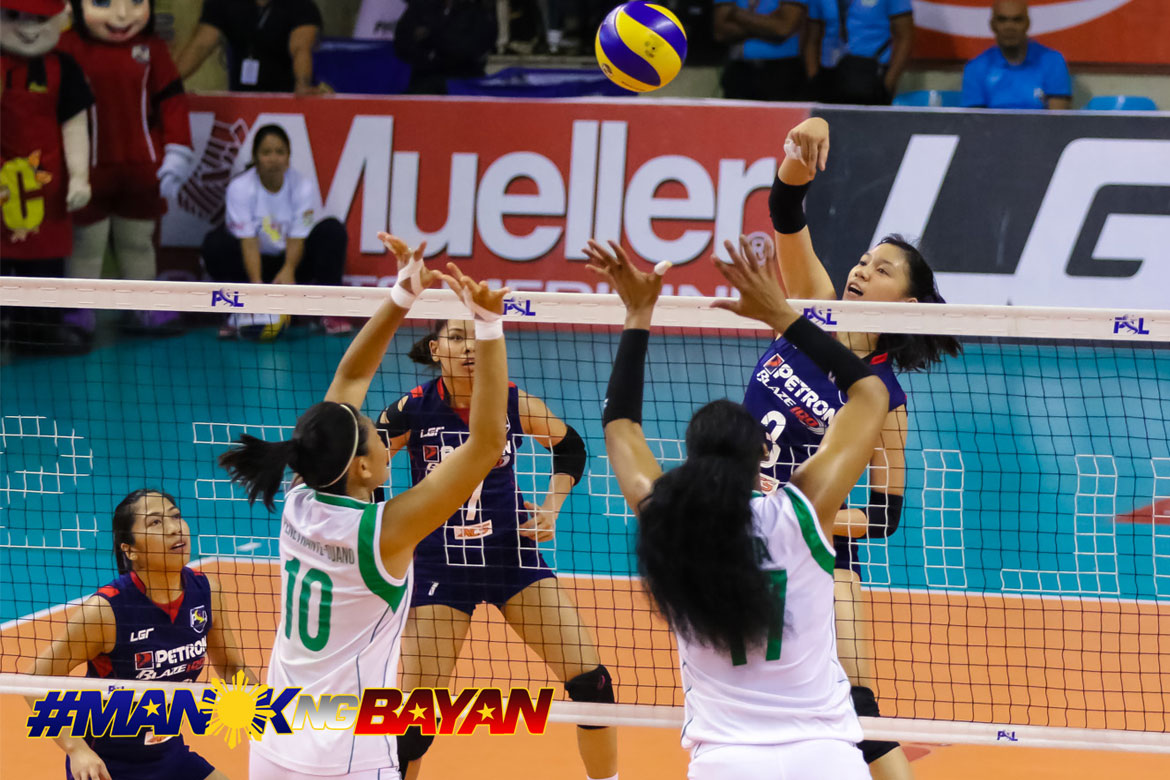 The league-leading Petron Blaze Spikers unleashed a furious rally down the stretch to eke out a 25-22, 22-25, 25-18, 26-24 victory over the SMART Prepaid Giga Hitters in the Chooks to Go-Philippine Superliga Grand Prix before a massive weekend crowd at the Baliwag Star Arena in Bulacan.

Import Lindsay Stalzer and Frances Molina came through with clutch hits, while Mika Reyes foiled another furious performance from Gyselle Silva, as the Blaze Spikers preserved their immaculate slate.

It was Petron’s eighth consecutive victory, putting them two wins shy of sweeping the eliminations and bagging the top seed in the quarterfinals.

Stalzer, the Most Valuable Player in 2015, finished the job with 17 attacks and two aces for 19 points, while Molina and Aiza Maizo-Pontillas chipped in 13 markers apiece for Petron, who missed the services of American import Hillary Hurley as she is still recovering from a mild injury.

Reyes, for her part, delivered three blocks for a nine-hit effort.

More importantly, her defense on Silva played a crucial role in this important win before the league heads to a 10-day break in observance of the Lenten Season.

“Kudos to Gyselle Silva. Her heart was there, making sure that all her spikes would be converted into points. We were inspired to stop her. I told myself that I will block her no matter what,” she added.

With Silva wreaking havoc from the attack zone, the Giga Hitters erected a five-point lead in the fourth set and threatened to stretch the match to a deciding set, 22-17. Although Stalzer delivered three consecutive hits, Silva scored on back-to-back aces to give Smart set point, 24-21.

READ  Cignal boots out Foton to advance to semis

Stalzer unloaded a powerful spike from the right wing, before Chloe Cortez scored off a gift. Molina then uncorked a pair of spikes to give Petron match point, 25-24.

Stalzer finished the match with an ace, towing the Blaze Spikers out of danger in a marathon match that lasted one hour and 42 minutes.

Her partner, Sanja Trivunovic, submitted only 11 markers for the Giga Hitters, who remain winless in eight outings.

Petron will next face the Sta. Lucia Lady Realtors on Thursday, April 5. SMART, on the other hand, will have a long break before taking on the Cocolife Asset Managers on Saturday, April 7. Both games will be played at the Filoil Flying V Centre.