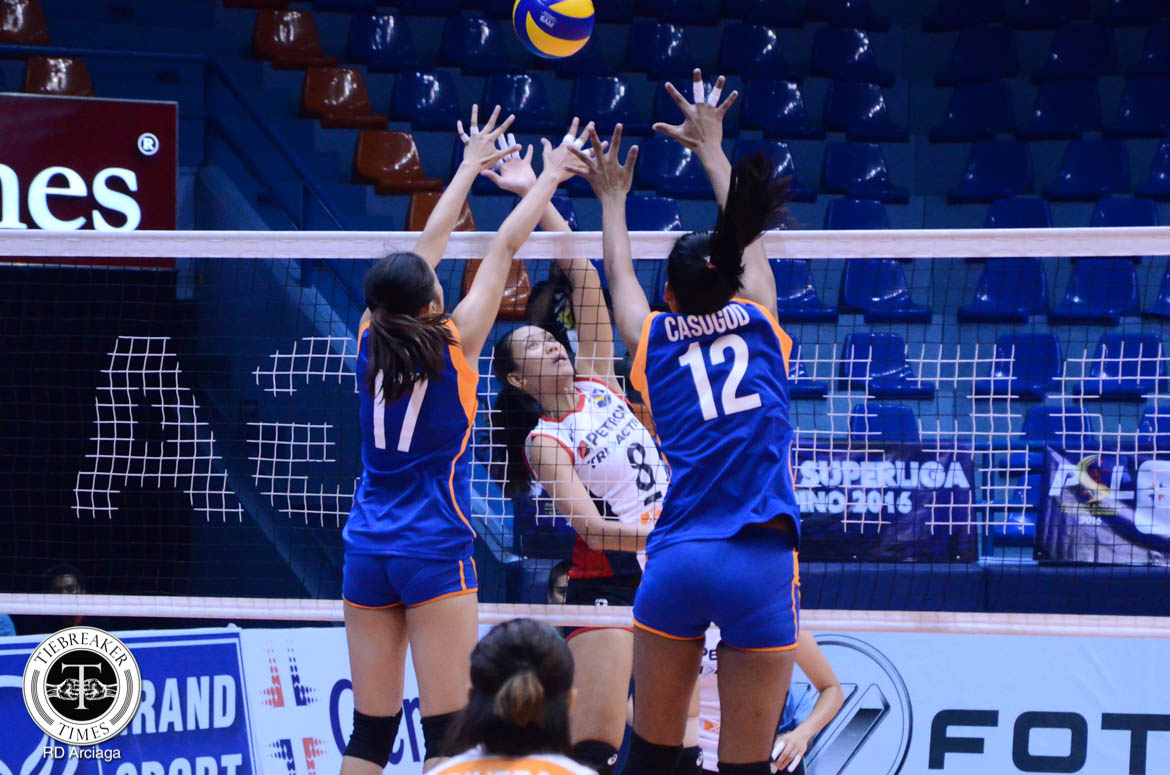 The Tri-Activ Spikers waxed hot in the opening frame, with Bernadeth Pons and Aiza Maizo-Pontillas leading the way. Maizo scored via an off-speed hit, followed by a Pons ace, to put them ahead 5-2. Geneveve Casugod countered with a quick hit, but that was not enough to stave off Petron’s blitz. After a Ces Molina ace, which put Petron at an 11-5 advantage, Generika’s Marivic Meneses attempted to pull her team back into the set, going on a 3-0 run all by herself to trim the deficit to 3, 12-9. Unfortunately for her, Petron were ready ,as they went on a 4-0 run capped by Pons scoring off a block for a 16-9 lead, the biggest of the set. From there it was only a matter of time before Petron took a 1-0 set lead.

Generika came alive in the second set, as Meneses scored back-to-back points for a 4-2 lead. The Lifesavers didn’t let up, pummelling Petron’s defenders, leading to an Adorador ace that put them ahead, 12-5. Meneses continued to terrorize Petron, scoring consecutive aces for a 19-11 lead. Petron, however, would not go down without a fight, as they eventually cut their deficit to just 2, 23-21. The Tri-Activ Spikers ran out of time, however, as Generika then scored the last 2 points of the set.

Neither team wanted to give in during the third set. After trading points in the opening minutes, Molina scored on a drop to give her team some cushion with a 6-4 lead. Backed by Meneses, Generika eventually took an 11-9 lead.

Petron, however, had other plans, as they fought back and eventually tied the set with a Pontillas down-the-line kill. The back-and-forth set settled into a tie at the 22-all mark, but a Molina kill gave Petron the lead that they didn’t surrender. Petron scored the next two points of the match, capped by a Pontillas tap that gave them a 2-1 set lead.

Generika attempted to replicate their second set success, with team captain Rubie De Leon scoring consecutive aces for an early 4-1 lead. Generika were able to fend off every Petron attempt to score, eventually doubling their opponent’s output, 14-7. From that point on Petron played white-hot, scoring six straight points, two of them coming from timely Acy Masangkay aces. Generika’s receiving woes continued, allowing Petron to tie the set at 20-all after a Cherry Nunag ace.

Both teams battled it out, with Chlodia Cortez scoring off the block to give Generika set point, 24-23. Pons and Moline paved the way for Petron’s comeback, scoring a block-out and hitting a crucial block respectively to hand Petron match point, 25-24. While Generika were able to tie the set, Pontillas and Nunag scored the final two points to hand the match to the Tri-Activ Spikers.

Team captain Pontillas led the way for Petron, top-scoring with 17 points. She was aided by Pons, who scored 16; 12 off spikes, with 3 blocks and an ace. Molina rounded out the double-digit Petron scorers with 14 points.

For Generika, middle blocker Marivic Meneses led the way with 14 points off 10 spikes, 2 blocks, and 2 aces. Her University of Santo Tomas teammate, Chlodia Cortez, was the other Lifesaver in double-digits with 10 points.

Despite the stellar play of Pontillas, Molina, and Pons, Petron head coach George Pascua credited the win to the bench players’ contribution.

With the win, Petron improve to a 2-0 slate, tied for first with F2 Logistics, while Generika fall to a 1-2 record.