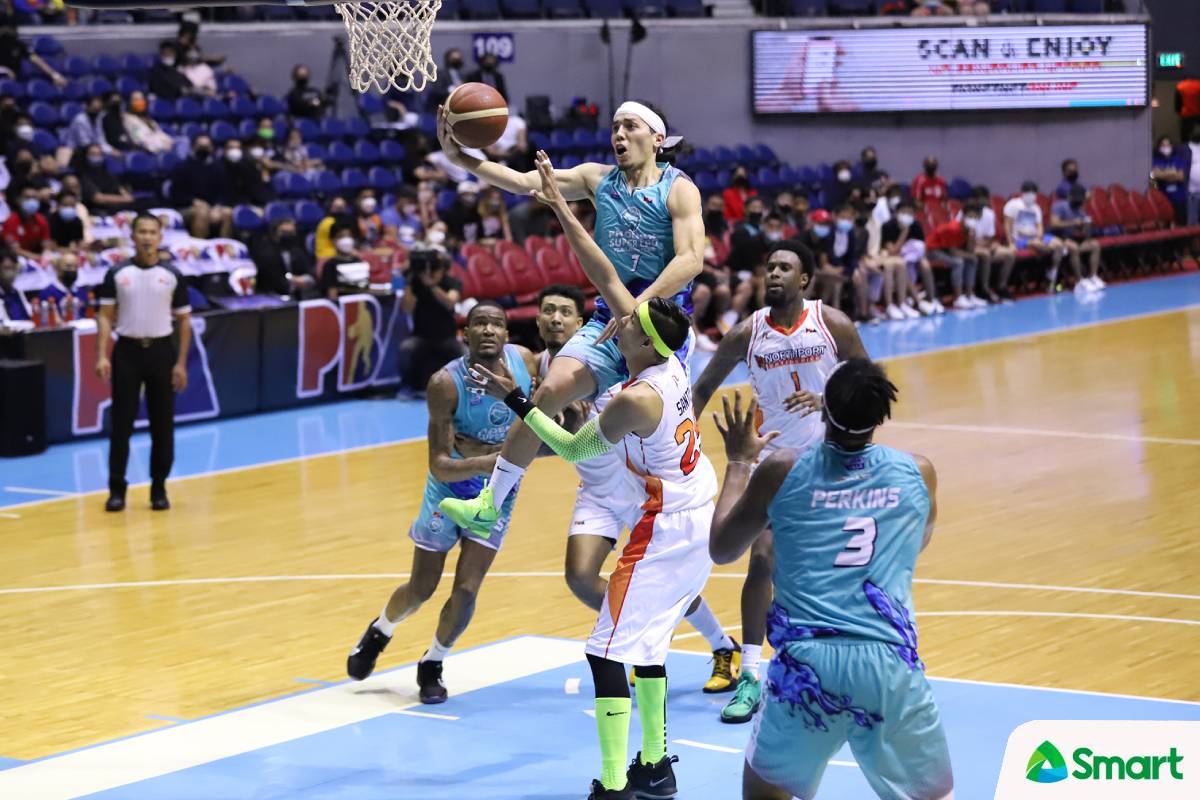 Matthew Wright came through in the clutch once more, lifting Phoenix Super LPG past NorthPort, 101-98, on the way to the 2021-22 PBA Governors’ Cup quarterfinals, Sunday evening at the SMART Araneta Coliseum.

Struggling all game long, the star guard made the biggest of baskets in crunch time, completing a three-point play off a Jamie Malonzo foul with 29.3 seconds remaining to give the Fuel Masters the lead for good.

Wright finished with 11 points, seven rebounds, and five assists as Phoenix clinched the no. 8 seed to forge a meeting with the top-ranked Magnolia in a rematch of the 2020 Philippine Cup bubble quarters.

“Credit goes to the players. Guys just didn’t give up,” said head coach Topex Robinson. “We were struggling, I mean, the whole game. We just made a lot of stops in the fourth quarter. And again, at this point, it’s really them.”

That endgame magic by the Gilas Pilipinas stalwart also preserved the efforts of RR Garcia and Jason Perkins, who took turns in that furious fourth quarter rally that flipped the game around after they fell by 15 points early.

Garcia fired 19 points, 16 of which he made in the second half, on three treys for his best scoring output this conference. The 32-year-old guard was just averaging a measly 3.6 markers prior to the timely explosion.

He went 2-of-4 from the charity stripe, the last of which he made with 19.6 seconds left that eventually settled the final score as the Batang Pier failed to capitalize on their opportunities to tie the game as time faded.

“I just saw vintage RR,” Robinson lauded of the eight-year pro. “RR has been reliable for us. The opportunity for him to rise to the occasion came, and he just took advantage of it. He really just didn’t give up.”

Perkins contributed 18 points and 11 rebounds in yet another double-double outing. RJ Jazul chimed in 11 markers on three triples as well.

Du’Vaughn Maxwell top-scored for Phoenix with 31 points and 13 rebounds as he once again proved the team right by bringing him in late in the meet.

“During those huddles, guys were talking amongst each other. Guys kept reminding each other, guys kept encouraging each other. And yeah, they just wanna give it a chance, and the opportunity was there,” Robinson said.

Jamel Artis led NorthPort with 21 points and 12 rebounds in 48 minutes in the defeat that put a bitter end to their season.

Robert Bolick had 19 points, nine rebounds, and seven assists. Jamie Malonzo made 15 points, while Arwind Santos and Roi Sumang had 14 each.

It surely is a heartbreaking way to exit for a team who turned its fortunes around after a 0-5 start into the conference, becoming the league’s hottest team at one point when it won five straight to put itself in playoff contention.

And it’s quite ironic that the Batang Pier’s campaign ended in the hands of one of the squads they actually beat during that heater of a run.

#ReadMore  Victolero glad to see Abueva back home with fans