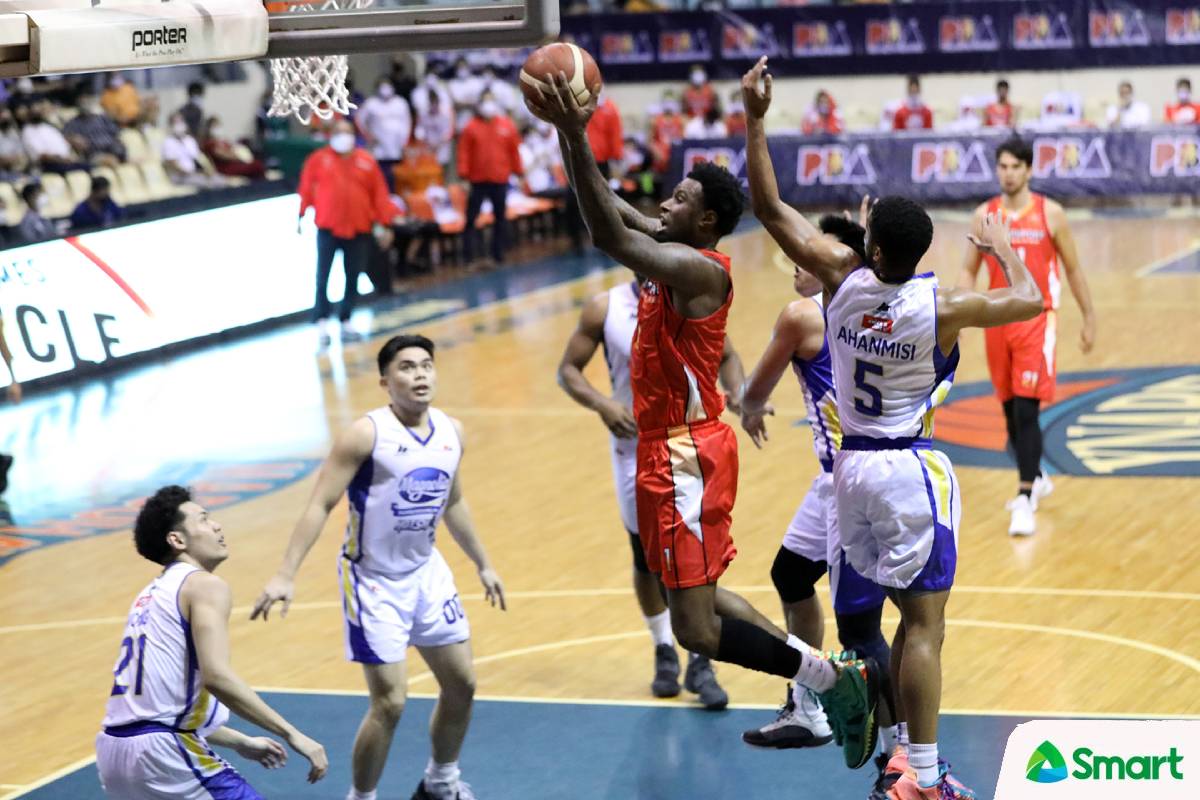 Jamel Artis turned in his finest performance to date as NorthPort stunned Magnolia, 103-101, to end the remaining unbeaten streak in the 2021-22 PBA Governors’ Cup, Thursday evening at the Ynares Center in Antipolo.

The 29-year-old finished with 42 points, including the go-ahead pull-up jumper against Rafi Reavis with 49.2 seconds left that broke the 99-all deadlock — and eventually saved the Batang Pier from a 19-point collapse.

Artis also collected nine rebounds and eight assists to lead his side to their second win, which came at the expense of another unscathed team. They ended the perfect run of Meralco just last week.

“Grabe rin ‘yung import, nag-step up talaga,” lauded head coach Pido Jarencio. “I challenged him nga before the game, sabi ko if you can score 50 or 60 points, it’s up to you. You have the go-signal. Kaya ‘yung confidence, andun.”

Artis played the entirety of the match, but hardly showed signs of slowing down most especially down the stretch as he strapped the crew on his back.

As the Hotshots rallied and went ahead, 98-96, following Paul Lee’s perfect trip to the charity stripe, the Pittsburgh product converted a three-point play to put his side up by a point with 1:23 remaining.

And when counterpart Mike Harris tied the game with a split, Artis then hit the big shot from the perimeter to give NorthPort the 101-99 lead.

The locals took it from there. Jerrick Balanza swatted Aris Dionisio’s shot away, and Jamie Malonzo made his share by going 1-of-2 from the line to extend the Batang Pier’s lead to three with 18.4 seconds left.

Arwind Santos, on the other hand, blocked Harris twice underneath, but his supposed third block was ruled as a foul. That gave the former Best Import two freebies, which he both made to slice the gap, 101-102, with 10.3 ticks left.

Anxious moments filled NorthPort afterward when Artis only made just one of his two foul shots, but it dodged a huge bullet when Paul Lee missed his potential game-winning three-pointer as time expired.

“They did their work today. Talagang puso. Hard work. Trabaho talaga,” said Jarencio, whose Batang Pier improved to 2-5 even if they’re missing Robert Bolick due to Gilas Pilipinas and Kevin Ferrer because of an injury.

Malonzo supplied 19 points. Santos, meanwhile, made 14 points, eight rebounds, and a game-high four blocks despite a sprained ankle. Roi Sumang chipped in 10 markers in his best outing yet for his new team.

NorthPort will shoot for a third consecutive win against the 4-4 Phoenix Super LPG on Saturday at 6:30 p.m. also at the same venue.

Harris, Barroca, and Jalalon joined hands for that 8-0 run en route to a 90-86 lead with 4:13 to play. But Artis prevented them from pulling away with a three-point play, setting up the fiery exchange all the way to the end.

Magnolia will have a chance to bounce back against the streaking San Miguel Beer (5-3) in a rivalry clash on Sunday at 6:30 in Antipolo.