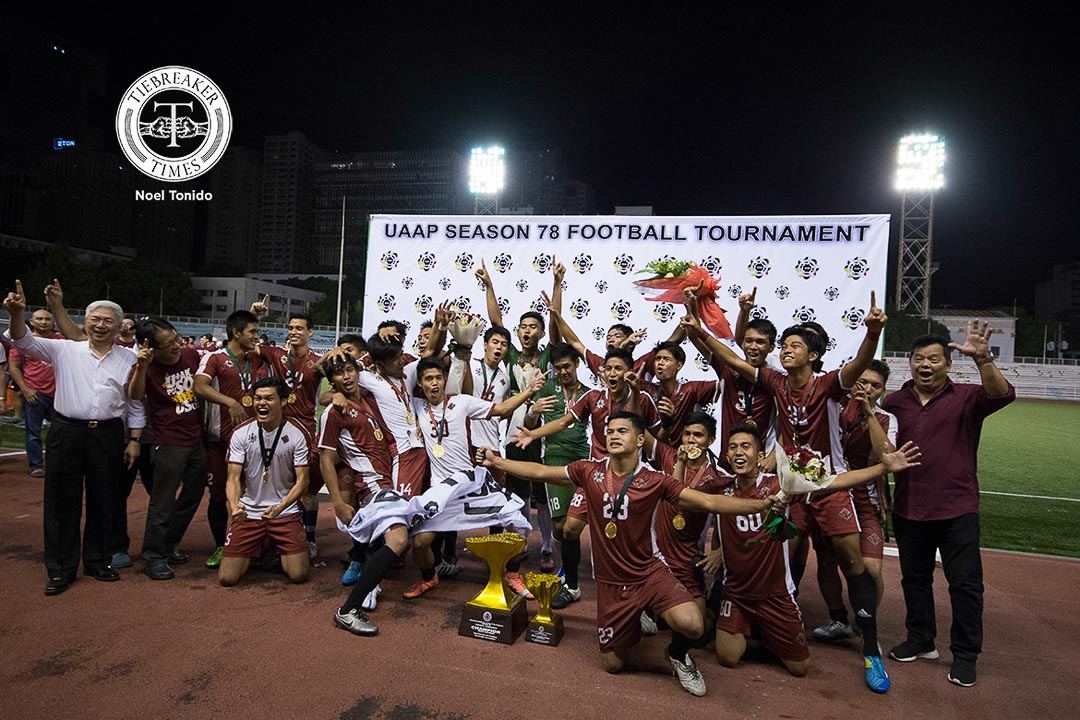 After four years, the University of the Philippines Fighting Maroons are UAAP Men’s Football Champions once again!

In a season that has already been hard for the Fighting Maroons before a ball was kicked, after their teammate Rogie Maglinas passed away due to cancer, the current batch of State U footballers dedicated every moment to Maglinas, and their strong drive to win the championship was evident once the Finals kicked off.

UP defeated the Ateneo de Manila University Blue Eagles, 4-1, tonight (May 5, 2016) at the Rizal Memorial Stadium in Manila to win the UAAP Season 78 Men’s Football Championship. Kintaro Miyagi scored three goals (38′, 69′ & 80′) and captain Daniel Gadia scored in between (33′), while outgoing Ateneo skipper Mikko Mabanag pulled one back for the Blue Eagles (36′) in the first half.

As in their first half performance against the University of Santo Tomas, UP started the game the better team, as the Fighting Maroons constantly bombarded Ateneo in search of goals to impose themselves on the game. After Ateneo captain Mabanag directed his free kick over the UP bar, the Fighting Maroons dominated the rest of the period.

Fighting Maroons forward Kyle Magdato had a good sniff at the Blue Eagles goal, only for goalkeeper Kenneth James to parry it away for a corner. From the corner, right-back Feb Baya found himself unmarked at the far post, yet he headed wide. UP maintained their hold of the ball, making chances tp score for themselves. Some good passing allowed Rafael Patangan room to shoot, but James wasn’t tested.

On the other hand, Ateneo had to attack in spurts due to UP’s relentless hold of the ball. One of the times the Blue Eagles broke free, Masyu Yoshioka played a cross into the UP box towards Jarvey Ocampo Gayoso which was eventually cleared by the Fighting Maroons’ defense. It was back to normal once the ball was cleared, as Gadia latched on a Patangan cross to unleash a tame shot, which was caught by James.

A UP goal seemed inevitable as the Fighting Maroons kept knocking on the door. The Fighting Maroons finally got it in the 28th minute. James was forced to deflect Gadia’s attempt away, but Miyagi kept himself onside and tapped the ball into the Ateneo net. UP’s resolve was visibly strengthened after that opener and they didn’t let their intensity drop.

Just moments after, UP doubled their lead in the 33rd minute. Gadia found himself in a dangerous position, and he skipped past the Blue Eagles and unleashed a powerful shot past a helpless James. UP were just utter dominant. The Fighting Maroons excellence in attack and solidity in defense looked too much for the Blue Eagles.

Nevertheless, the Blue Eagles got a lifeline in the 36th minute. Mabanag stepped up to take a free kick outside the Fighting Maroons box and his shot was mishandled by UP goalie Ace Villanueva. The Fighting Maroons had chances to restore their two-goal cushion, but unfortunately they failed to take them. The score was still UP 2-1 Ateneo at the break.

Despite emerging in the second half on the front foot, Ateneo struggled to test Villanueva. It was reminiscent of Ateneo’s elimination round games against UP: a goal down and an improved performance after the restart. UP, though, retained their composure, and only a brilliant James save against Ian Clarino’s free kick prevented the Fighting Maroons from adding to their tally.

The game turned frantic with Ateneo coaches, players, and fans protesting the referee’s calls. Things them went from bad to worse for the Blue Eagles come the 70th minute. After some good work from winger JB Borlongan, Miyagi again tapped in the ball to restore the Fighting Maroons’ two-goal lead. UP continued their dominance and the Fighting Maroons pushed for more goals before fulltime.

Come the 80th minute, some superb passing once again allowed UP to get their fourth goal of the game. Similar to his other goals, Miyagi found himself in the right place at the right time to score the Fighting Maroons’ last goal of the game. It ended UP 4-1 Ateneo to cap off a day and what was a fitting tribute to Maglinas, as their counterparts from the UP Women’s Football Team had also won a championship today.

Gonzaga opens up on failed beach volleyball team-up with Valdez