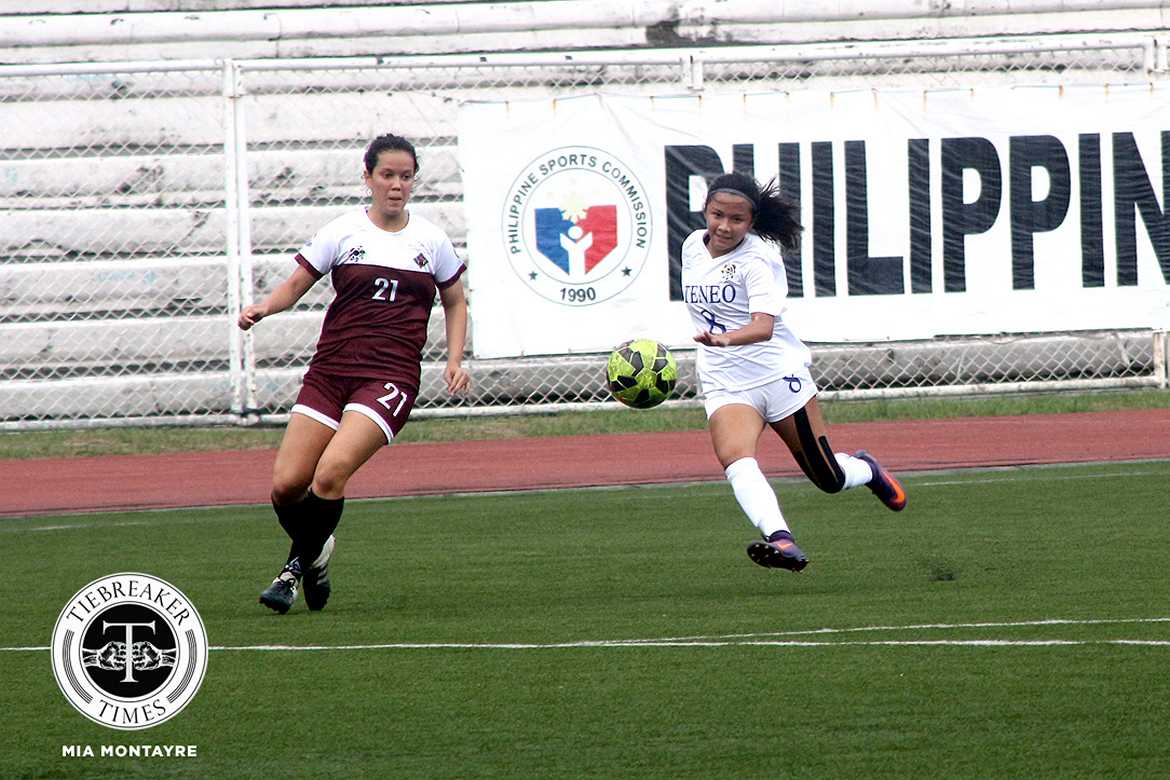 Winning 1-0 against the reigning UAAP women’s champions UP Lady Maroons meant a great deal to the Ateneo Lady Eagles as it not only let them grab bragging rights in Katipunan for it has also allowed them to start the season on the right foot.

In the past four years, the Lady Eagles finished a place short of jousting for the title. Since UAAP Season 75, the Ateneans had to settle for third and last year’s was mostly due to a poor start.

With a new coach in JP Merida at the helm, the ladies in blue were eager to change their unenviable fortune in the tournament. The experienced coach who has led the Ateneo men’s football team to glory before, has a lot to offer to the women’s side
.
The lone goalscorer in their opening day victory, Nona Amoncio, certainly attests to the positive impact the new mentor has had in the team.

“He’s a very encouraging coach. Before the game, he was just saying ‘let’s have fun, let’s do our best and enjoy the game.’” the fourth year BFA ID student shared.

The attack-minded player also attributed to Merida her decision-making early in the game that led to the breakthrough goal.

“I’ve been practicing my free kicks [so] coach really just told me [to go for it] if it’s direct,” she stated.

Having played quite a few games against UP, Amoncio added that she acknowledged the weakness of UP in goal as a signal to give it a try.

As the game went on, UP asserted themselves and were piling the pressure on Ateneo. A way to cope with the Lady Maroons, Amoncio bared, was to switch things up defensively in order for them to clog the space the champions might use to play good balls.

“Credit to our defense. As you can see, we switched in the second half. We still remained composed,” the Miriam College High School alumna elaborated, noting that it required the help of players who were out of their preferred position to contain UP.

A win in the bag in their first try, Amoncio and the Lady Eagles feel happy yet at the same time know that this is just the first step of many if they want to lift the champions’ trophy. Not willing to get carried away, Amoncio quickly reminded herself and the team how far and how much it takes to get to where they want to be.

“We just have to take it game by game. Coach kept saying in order for us to win we have to put our six months worth of training to work,” she addressed.

Early days indeed but it appears that Ateneo embraced the changes as they look forward to a change in scenery come the end of the season. They have been in the periphery of success for quite a while now so the determination to succeed is at an all-time high.

The ladies in Katipunan under the tutelage of Merida are a team to keep an eye out as they aim to cop their first ever title in UAAP women’s football. After all, if their neighbors did it last year, why couldn’t they?