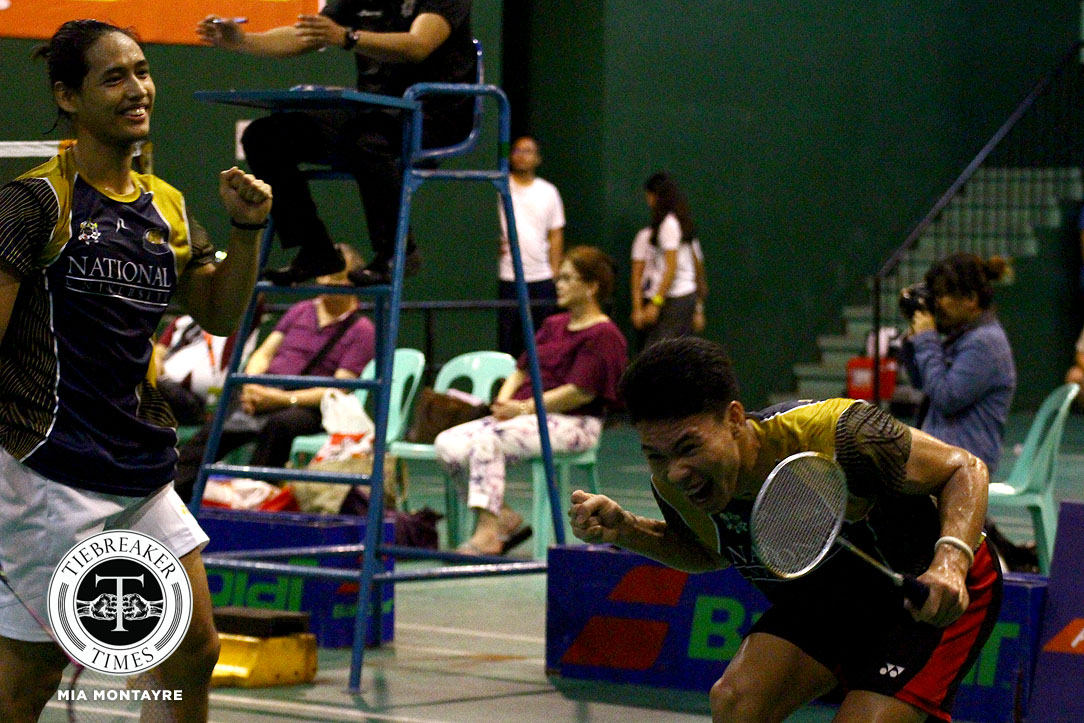 The winning streak and the four-peat dream lives on

With an emphatic kill from Christian Cuyno, defending UAAP Men’s Badminton champions National University Bulldogs extended their winning run to 34 game and pocketed Tie 1 of the best-of-three Finals series against the University of the Philippines Fighting Maroons, 3-1, Saturday morning at the Rizal Memorial Badminton Hall.

UP’s JM Bernardo prolonged his own singles winning streak to take the lead for his team. The second-year Maroon stopped Mike Minuluan in two 21-16 games, after pulling away in the middle portions of both sets. The third-year Bulldog kept himself in the match, forcing the opponent to commit errors, but Bernardo was composed enough to eventually take the contest.

From there, the reigning kings took over led by their captain Alvin Morada.

The fourth-year stalwart equalized after sweeping Vinci Manuel in the second singles match. Morada used a variety of shots to easily take the first set at 21-12. Nonetheless, his former national team colleague gained confidence in the second game. The Bulldog needed to fend off his opponent to eventually pull away late at 21-16.

Picking up from where they left off in the past few ties, Bernardo and Maroons captain CK Clemente stunned Morada and Alvin Palmares in the first game of the first doubles match at 21-16.

However, the National U duo picked up the pace in the second set, and eventually leveled the match at the same scoreline. It was a tussle in the deciding set, but errors from Bernardo and Clemente slowly gave the set away to the Bulldogs. Ultimately, Morada and Palmares took the final game at 21-12 to move to within a match of taking the tie.

That focus was evident as they shocked the strong tandem of Roberto Pineda and Paul Gonzales with a huge 21-15 win. Errors piled up for the Maroons, which the Bulldogs capitalized on with swift counters in the next few rallies.

Down six at 11-17, UP came to life after a huge serving game from former Bulldog Gonzales, which sent them to within one, 16-17. Nonetheless, dictating the pace, Cuyno and Minuluan eventually closed the match at 21-19.

The Bulldogs will have their opportunity to extend their domination when they face the Fighting Maroons, Sunday, October 15 at 8am in Tie 2 of the Finals.