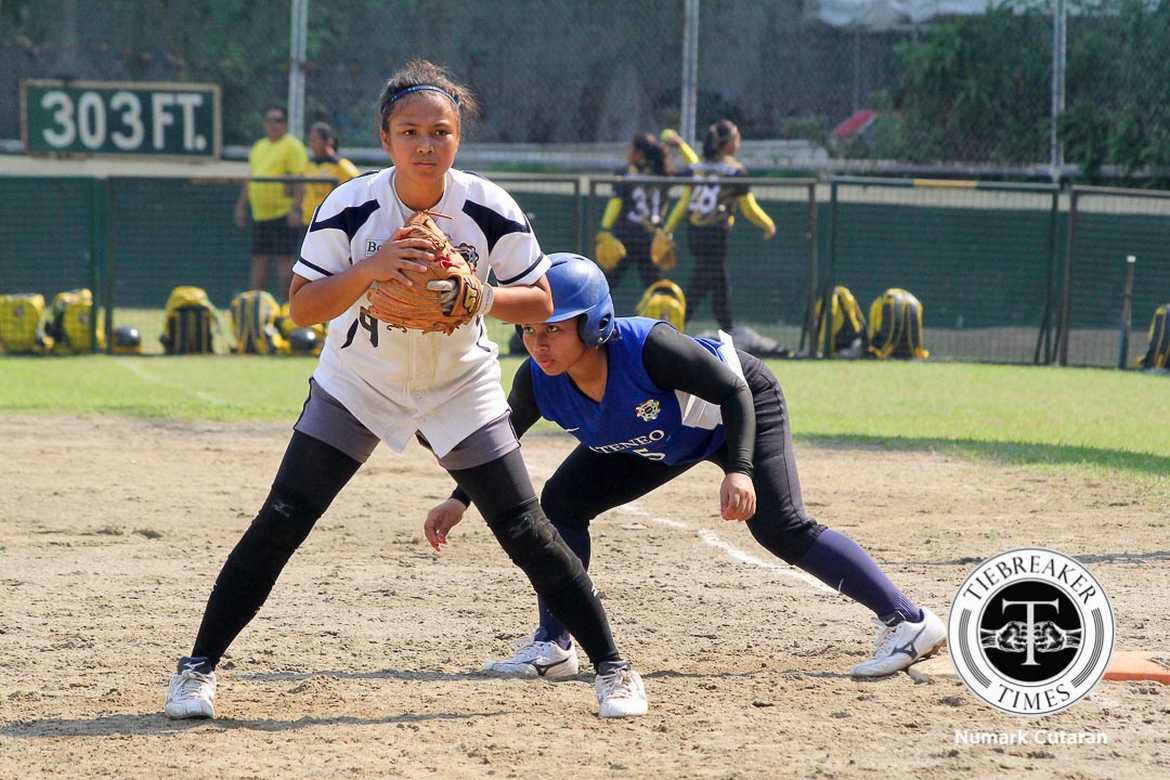 Their scheduled game against the winless Ateneo de Manila University Lady Eagles could not have come at a better time as the Lady Bulldogs limited the Lady Eagles to just one hit in a 12-0 shutout to return back to the win column.

A double by Ateneo team captain Angela Natividad against NU’s starting pitcher Rina Vailoces opened up the game. A strikeout of the next batter and a ground out of Cheska Imperial moved Natividad to third base. However, Vailoces fanned out Beatrice Parma to strand the senior at third base. That was the furthest the Lady Eagles could go in this game.

On the other end, the Lady Bulldogs completely devastated the Ateneo defense. Lead-off batter Shaira Damasing gained base after being hit by a stray Nikki Borromeo pitch. A catching error by Ateneo catcher Cheska Imperial moved Kristine Acuna to base. The floodgates then opened after. Three consecutive singles by the next three batters gave the Lady Bulldogs three runs.

After a flyout of Arago for first out, Carla Payapaya was hit by a pitch to load up the bases. A double by senior Baby Gequillo to center left field brought in two more runs. With the next batter grounding out, Damasing connected on a two-out single to give the Jhocson Street lady batters a 7-0 lead.

“What we missed in the last two games was our hitting,” said NU head coach Edgar delos Reyes. “In our last practice, we worked on our batting and our positioning. We expected that the pitching of Ateneo will not change and they did not. That’s why we were successful today.”

Borromeo started of well at the bottom of the second inning in striking out first batter Aimee Watson and a ground out at second base for Tulalian. The Lady Eagles could not close out the inning though in giving up five runs. Fielding errors from the Lady Eagles led to the Lady Bulldogs gaining base and gaining a run while a single Gequillo, her second hit of the game, punched in another run. Mary Grace Blanco then joined in the batting party with a grounder to right field that brought in two more runs. A single by Damasing gave her her second RBI of the game and her team a huge 12-0 lead.

“We focused on line-drives and maintaining discipline. They wanted to prove something also,” the first year head coach shared. “In the last game, parang hindi NU yung nakita ko. Today, they’re back.”

The 12-0 lead at the middle of the fourth inning was enough for the mercy rule win. Moreover, it gave the Lady Bulldogs their first win in three games.

“Naging positive. Nakita ko sa kanila na after La Salle, naging wake-up call sa kanila yun,” Delos Reyes said about the morale of the team after losing to La Salle. “Naging positive lahat at na-refresh sila. They got back to what we talked about during our team building.”

After a one game absence due to injury, veteran catcher Colleen Alilin had an excellent outing in going 3 of 3 at bat. She was able to score two runs and had an RBI as well. Gequillo, Blanco, and Damasing both had two RBI’s as well with Gequillo adding two more runs to her statline as well.

Asked about the return of Alilin in the line-up, Delos Reyes said, “naging happy, not only me, but also our pitchers. Iba yung leadership ng veteran catchers. We need her sa hitting niya and her leadership.”

The NU Ladu Bulldogs (6-2) face a tough UST Tiger Softbelles (5-3) squad next on Monday, February 22 at 9am. In the next game of the day, the Lady Eagles look to break their losing streak against the UE Lady Warriors (3-5).