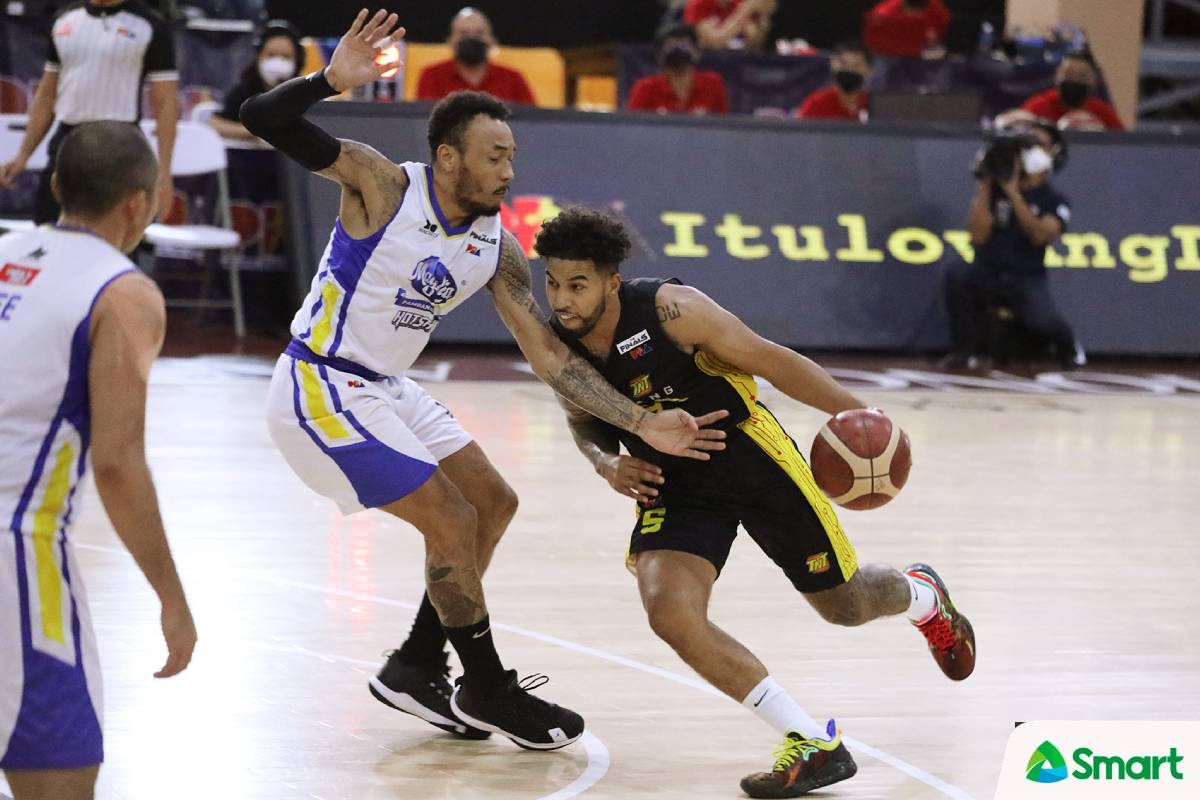 TNT ran wild in the second quarter and left Magnolia behind, 106-89, for a commanding 3-1 lead in the 2021 Honda PBA Philippine Cup Finals, Wednesday night at the Don Honorio Ventura State University Gym in Bacolor, Pampanga.

The Tropang Giga outscored the Hotshots 33-15 in the said period to turn a 24-all deadlock to a wide 57-39 lead at the turn. They never let up since and went on to move just one win away from ending a six-year title drought.

They now have a chance to close it out in Game Five on Friday although none from the team, especially coach Chot Reyes, is looking too far ahead.

“We need to find a way on Friday to be better on Friday than we were today – better effort, better execution, better energy – and then we’ll see what happens. We can’t think of too many things,” said the champion coach.

Spoiled was the BPC coronation of Hotshots forward Calvin Abueva with the flagship MVP Group franchise’s victory, which also atoned for their 96-108 defeat in Game Three last Sunday that was marred by physical encounters.

Finals MVP favorite Mikey Williams led TNT with 26 points on six triples, marking the fourth time in as many games in the series that he scored 20-plus points. He also collected seven assists and two rebounds in 38 minutes.

“Yes, he can make shots, but he also does a lot of things for us — he rebounds, he plays defense for us. And the most important thing is he plays within the system,” said Reyes of Williams, who’s celebrating his 30th birthday.

Jayson Castro had 12 points although he left the game with 4:17 left due to an ankle injury, which he suffered after stepping on the foot of teammate Kelly Williams while defending Magnolia counterpart Mark Barroca.

Ryan Reyes turned in a vintage performance off the bench as he poured all of his 10 points, four steals, one assist, and one of his two rebounds in the second chapter to help out in the aforementioned assault.

Dave Marcelo added 10 markers as well together with five boards as he helped maintain control of the lead in the second half.

“That’s just the way this team is constructed. We have players and they know when the need arises, they’re going to get the call,” said the champion coach. “And I just keep reminding them, stay ready.

“And Ryan does a great job as well in constantly talking and communicating with them and keeping them ready. It’s not all me. Certainly, the leaders, Ryan and Jayson have a lot to do with it,” added the 58-year-old.

TNT played with a complete crew as Troy Rosario saw action despite suffering a spinal shock and a broken pinky in Game Three last Sunday. He even started and collected five points, three rebounds, and an assist in 19 minutes.

“Shout out to Troy,” said Reyes. “And I thought by him being there, the message of courage was going to rub off on his teammates. So really, great heart was shown by Troy here. And I think everyone followed.”

Abueva, now a two-time BPC awardee, led Magnolia with 28 points and six rebounds in yet another double-digit defeat.

Erram and veteran center Kelly Williams, though, were quick to respond, with the former hitting a three-pointer from the top with 6:48 left to make it a 19-point cushion, 91-72, and TNT went on cruise control all the way.

Turnovers were once again a major issue for Magnolia. It committed a total of 24, which was converted by its opponent to 31 points.