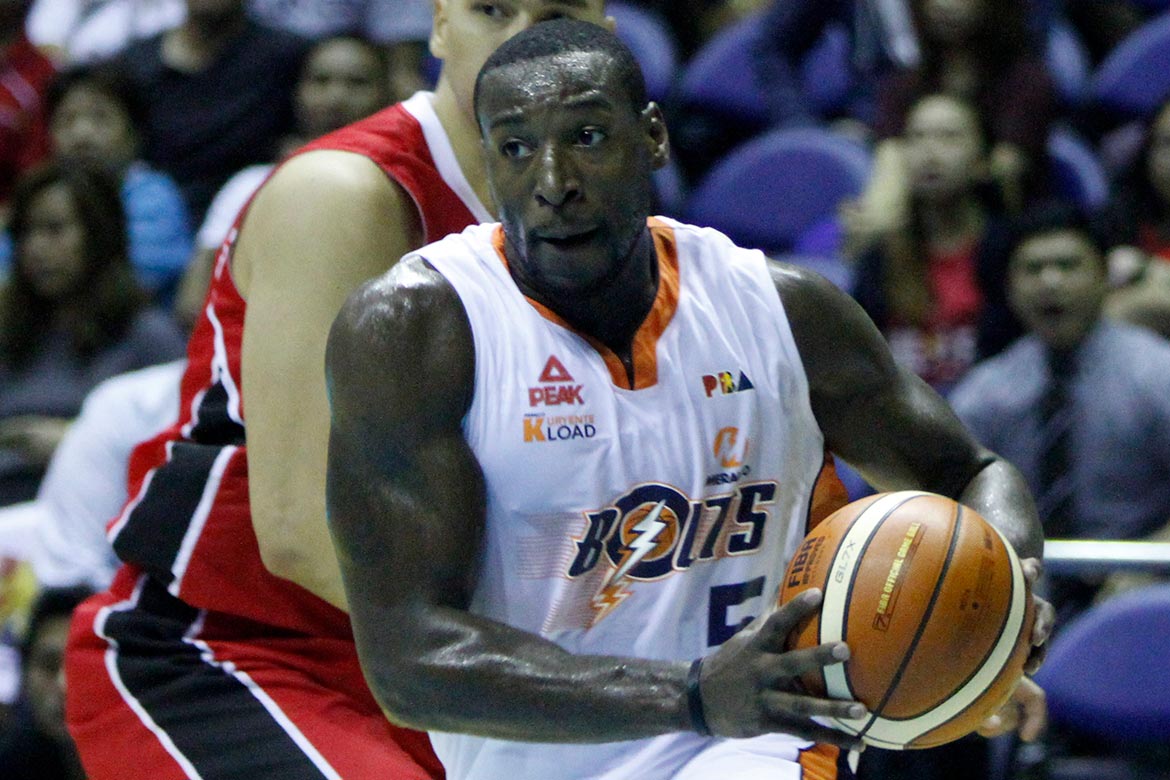 With the game hanging in the balance for the most part, the Meralco Bolts were able to buck the Alaska Aces’ comeback attempt to come up with a 100-96 win and continue their perfect 2-0 start in the 2016 Oppo PBA Governor’s Cup held at the Smart Araneta Coliseum Sunday evening.

Behind a massive 34-point, 15-rebound effort from import Allen Durham, the Bolts raced to a solo first finish after the opening weekend of the fresh conference.

“I’ve been here for months and we had a lot of time practicing. Definitely it’s gonna be tougher, teams gonna get better and practice for a longer time,” said Durham. “We just really want to be a good team and I’m happy for the wins.”

Durham, together with Reynel Hugnatan and Jared Dillinger pushed Alaska to a 96-85 lead with 1:24 left to play in the match. However, the ‘comeback kids’ of the Aces made the game interesting in the final stretch as LaDontae Henton and RJ Jazul both made triples to scare the Bolts.

On the next possession, Durham failed to convert on a layup against Alaska’s swarming defense. After the Aces’ timeout, Henton missed a potential game-tying triple with six ticks left. A split by Chris Newsome from the foul stripe sealed the victory.

Alaska had their best scoring quarter in the fourth with 32, but struggled in the rebounding department wherein they were outmuscled by the Bolts, 51-37. Meralco also took advantage of 16 Alaska turnovers by scoring 27 points out of it.

Coach Alex Compton of Alaska elected to rest Calvin Abueva, as he believes the the Commissioner’s Cup Best Player Award recipient deserved to recover from a banged up stretch of games prior to the tournament.

For Coach Norman Black, he was pleased with the teams perfect start so far. Moreover, he has no question about his reinforcement’s play and hopes it can be sustained until the end of the season.

“I hope he stays healthy. I don’t think there will be a problem because he has a good attitude and it’s up to us to utilize his talent,” Black said.

Black also mentioned that the team will be tougher as the days go by, and, with no games for the next five days, he aims to improve on a daily basis.

“I can’t wait to hit practice with the team this week,” Black added. “We’ll utilize this week to give more help to Jonathan Uyloan and (Mohammad) Jamshidi.”

Henton led Alaska in his debut with 33 points, 12 rebounds and 12/16 from the free throw area. Jazul chipped in 13 points, nine coming from downtown.

Meralco (2-0) looks to make it three straight as they face Tropang TNT on Saturday, July 23. Alaska (0-1) will be pitted against the Barangay Ginebra San Miguel (1-0) the next day. Both games will be played on the Big Dome.