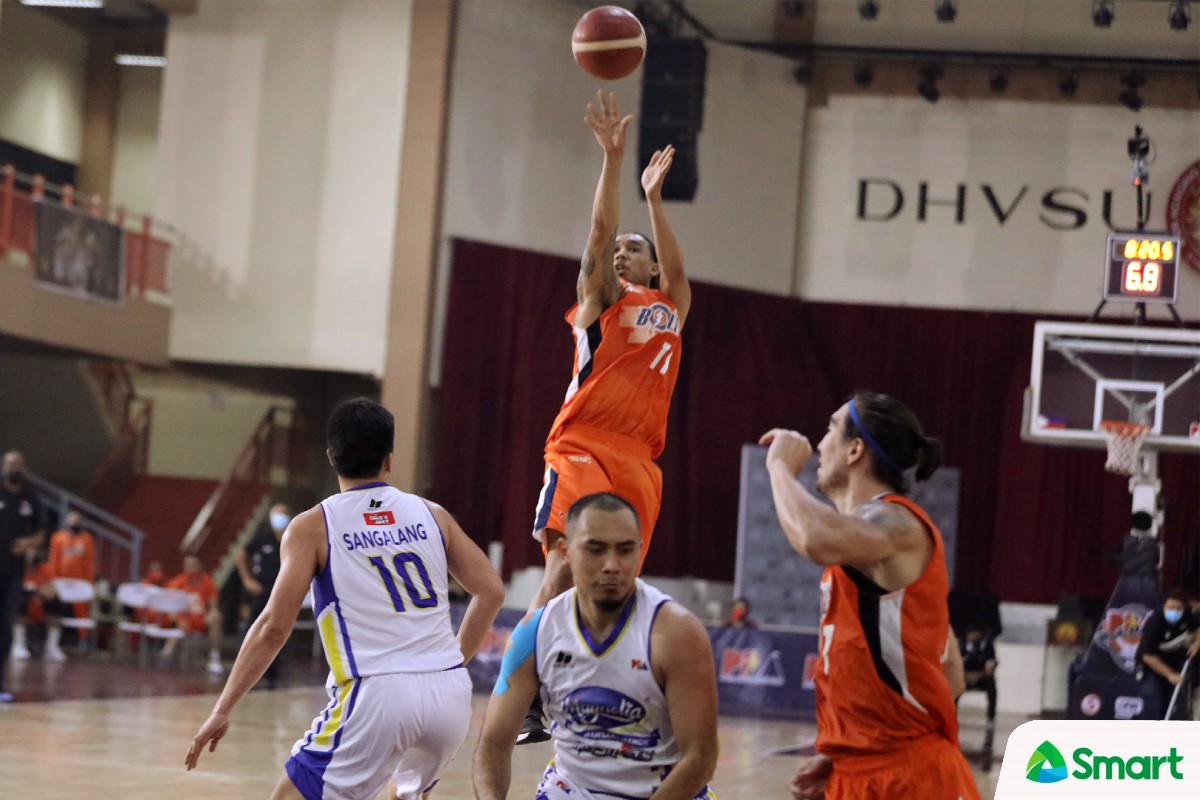 Chris Newsome nailed the dagger as a shorthanded Meralco survived Magnolia, 91-86, to avoid being on the brink of elimination in the 2021 Honda PBA Philippine Cup semifinals, Friday at the DHVSU Gym in Bacolor, Pampanga.

The Bolts were without a total of four players led by top big man Raymond Almazan due to a left ankle injury, but still managed to pull through en route to chopping the Hotshots’ lead in the race-to-four series at 2-1.

“We displayed a big heart tonight,” said head coach Norman Black. “We’re struggling a little bit because of lack of manpower. We’ve lost a lot of players this conference, and it hurts us a little bit as far as depth is concerned.

“But we just looked at this game as a do-or die-game,” he added. ” We just treated it like there was no tomorrow for us, and it was a must-win for us.”

Chris Newsome led the undermanned crew with 17 points, including the jumper with 6.5 seconds left to put the Hotshots out once and for all after melting a 21-point deficit to just three with less than 30 ticks remaining.

“We did have a pretty good-sized lead there that we lost once again, but I think we got a little bit tired down the stretch. But, the guys were able to hold on for the victory,” lauded the Grand Slam-winning mentor.

Nards Pinto supplied 16 points and five rebounds though he was not able to finish the game after suffering cramps late in the game. Mac Belo had 14 points and five boards as well off the bench in his first semifinal win.

Noy Baclao turned in his best game since joining the Bolts last year with 10 points, two rebounds, two assists, and a block in nearly 27 minutes.

“Nobody wants to go on vacation early. We want to make this series as competitive as possible,” said Black, “The desire of the players have been there the entire year and that’s why we’re in this position right now.”

Meanwhile, Paul Lee led Magnolia with 18 points in the loss that snapped their six-game winning streak dating back to the eliminations’ tail end.

Lee was among those who willed the Hotshots back into the game especially in the final moments, with his three-point play conversion followed by a Rafi Reavis putback cutting the gap to 86-89 with 29.5 seconds to spare.

But the magic they had in the last two games wasn’t there as Newsome went on to strike the dagger after getting rid of Calvin Abueva’s defense.

Still, it was a gallant fight by the Hotshots especially the young ones in Aris Dionisio and Jerrick Ahanmisi, who powered an 11-0 run early in the fourth quarter to make it 67-75 with 9:28 to go that woke up the squad.

Now, Meralco looks ahead on Game Five on Sunday, aiming to extend the series — and, possibly, to allow Almazan and the other Bolts like Aaron Black, Trevis Jackson, and Jammer Jamito to return to the fold sometime soon.