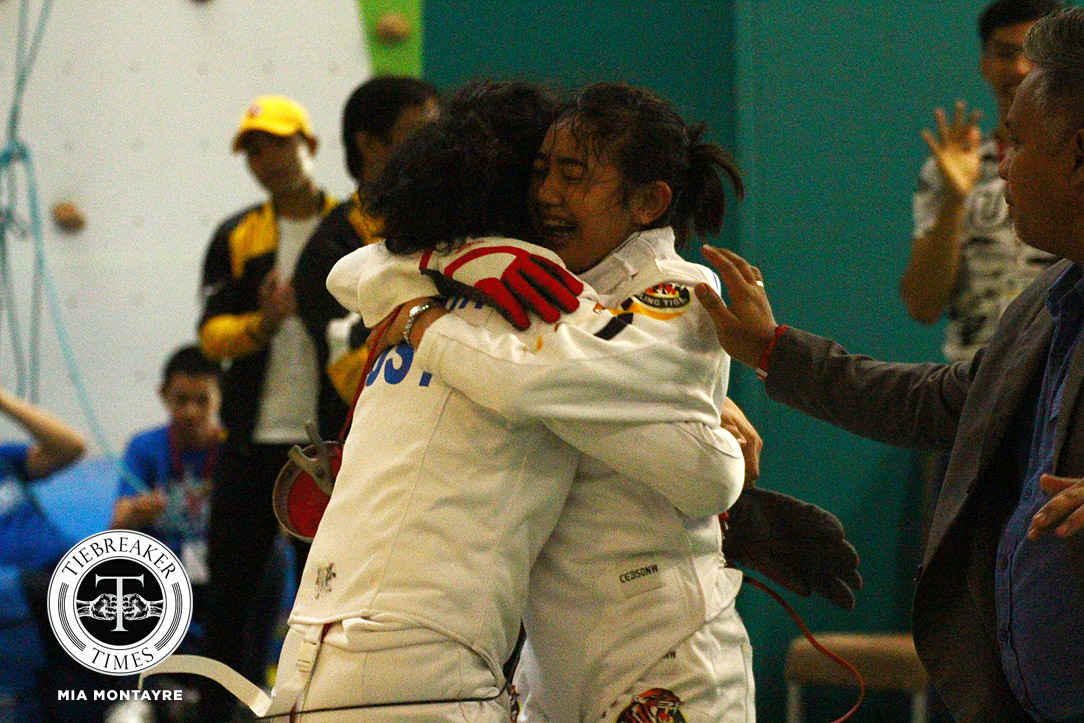 The rookie from Ateneo de Manila University bagged two golds in her two individual events, putting the Lady Eagles on the cusp of ending an 11-year title drought – during which, coincidentally, the University of the East Lady Warriors have dominated.

For the Management Engineering freshman, it was a contrast of reactions, as she entered the pistes for the foil and sabre events in Days 1 and 2, respectively.

She was expected to dominate the first one, but was a surprise to win the latter. Esteban shared, “For me, walang masyadong pressure for foil kasi wala masyadong kalaban. Like, my main opponent (in the country) is in high school pa.

“Sa sabre naman, there’s no pressure also because it is not my weapon.”

However, with such skill and determination combined, the 17-year-old standout was unstoppable.

In the championships’ opener, Esteban topped the pool and went on to run roughshod of the opponents in the direct eliminations. She demolished Henesy Odulio of University of Santo Tomas in the quarterfinals at 15-1, before taking down teammate and senior Patricia Paulo, 15-8.

De La Salle University captain Divine Romero then set up a showdown with the rookie after pulling off wins past sparring partner Patricia Eusebio, 15-8, and Anne Baring of UE, 15-2.

Come the match, Esteban took control early of the gold medal bout against Romero, and never looked back, taking the expected gold in foil. Paulo and Baring bagged the bronze medals.

But every worry the night before went down the drain as Esteban pulled off a stunner in the sabre play.

The Atenean went on to the finals after dismantling Reb Reyno of the University of the Philippines and Elvielyn Javinar of UE in the quarterfinals and semifinals, respectively. Defending champion Nicole Cortey reached the same phase after taking care of UP’s Martina Salvador and UST’s Cherie Manago.

In the finals, however, Esteban used her speed to outsmart the Lady Red Warrior and send Ateneo to the cusp of winning the title back after her second gold of the season, 15-10, in the title bout.

For the rookie, these victories are for her seniors.

“This is our strongest chance to end up as overall champions. So, expect us to fight and [hopefully] win more golds.”

The Female Fencers of UST jumped from fourth to second place in the strength of two podium finishes in Day 2.

Marielle Peralta denied reigning epee champion Mickyle Bustos a breakthrough mint for UE, as she took one for the Tigresses with a rousing 15-14 finish. The Lady Red Warrior earlier stopped Tomasina rookie Mira Dorimon in the semifinals, pushing the latter to a bronze. La Salle’s Romero took her second bronze of the year in the said event.

With the two silvers of Cortey and Bustos, the defending 11-time champions from Recto need to sweep the team events in order to prolong the dynasty. Otherwise, Esteban and the rest of the Lady Eagles might be the ones hoisting that golden trophy in two days time.