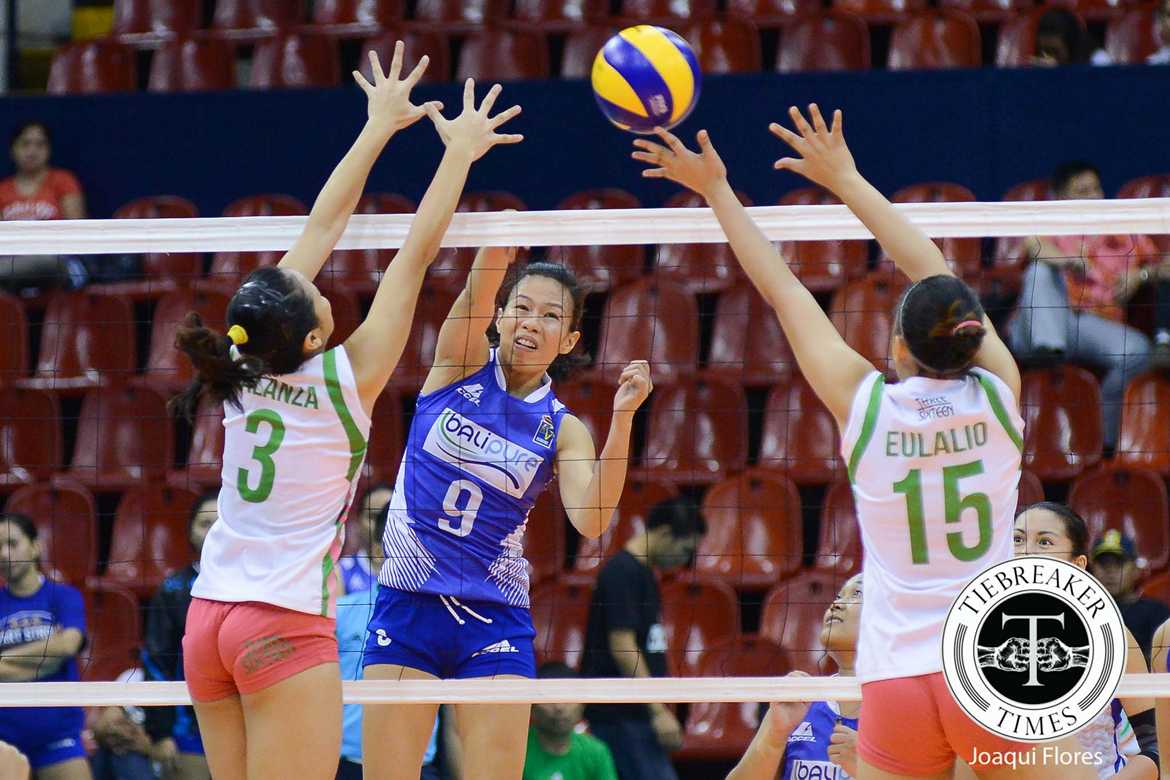 With their podium finish at stake, Janine Marciano filled the hole left by Alyssa Valdez for the Water Defenders in the Open Conference of the Shakey’s V League Season 13, Wednesday at the Philsports Arena.

Valdez is still uncertain to play the remainder of the conference as she is with the Ateneo Blue Eagles team representing the Philippines in the Asian University Games in Singapore.

Backup attacker Marciano stepped up for Bali Pure and scored a game-high 25 markers off 23 attacks and two service aces.

“[Janine] was much quicker and a lot more versatile now. She embraced her role regardless of what it is. I’m very proud of her for this match and I hope she gets to sustain her play in the remaining [games] of the series,” said Bali Pure’s playing coach Charo Soriano.

Both trying to gain momentum early, the teams exchanged blows all throughout the first set and were tied at 21-21 after a miscue by Laoag wing hitter Jema Galanza.

Then, a couple of solid hits by Mylene Paat, a block by Villegas on Charo Soriano and unforced errors by Bali Pure provided the gap for the Power Smashers, 25-23.

The Water Defenders then shocked the younger Laoag squad with an 8-0 barrage to open the second set capped by a quick attack by Amy Ahomiro.

Bali Pure never looked back, even after Laoag cut the deficit to three, 24-21. An off-speed hit by Ahomiro closed the second frame and tied the teams with one set each.

The Kiwi Lady Eagle scored 12 points for The Water Defenders, while Gem Ferrer had a season-high 62 excellent sets.

In the third set, the Power Smashers held the lead at 16-13, but the Charo Soriano-led squad still took the set after a 12-5 run powered by five of Marciano’s 23 total attack points.

Then, after trailing most of the fourth set and dropping it 19-25, capped by back-to-back attacks by Galanza, Bali Pure took control of the clinching set, 15-11, via attacks from Soltones, Dzi Gervacio and Marciano.

Game Two of the series will be on Saturday, still at the Philsports Arena.

“We can’t take the next game lightly. Laoag plays really solid volleyball and they have very strong outside hitters. Chi Saet is a veteran. She knows how to ramble our blocking patterns, so we have to improve in terms of our receive and defense,” said Soriano.