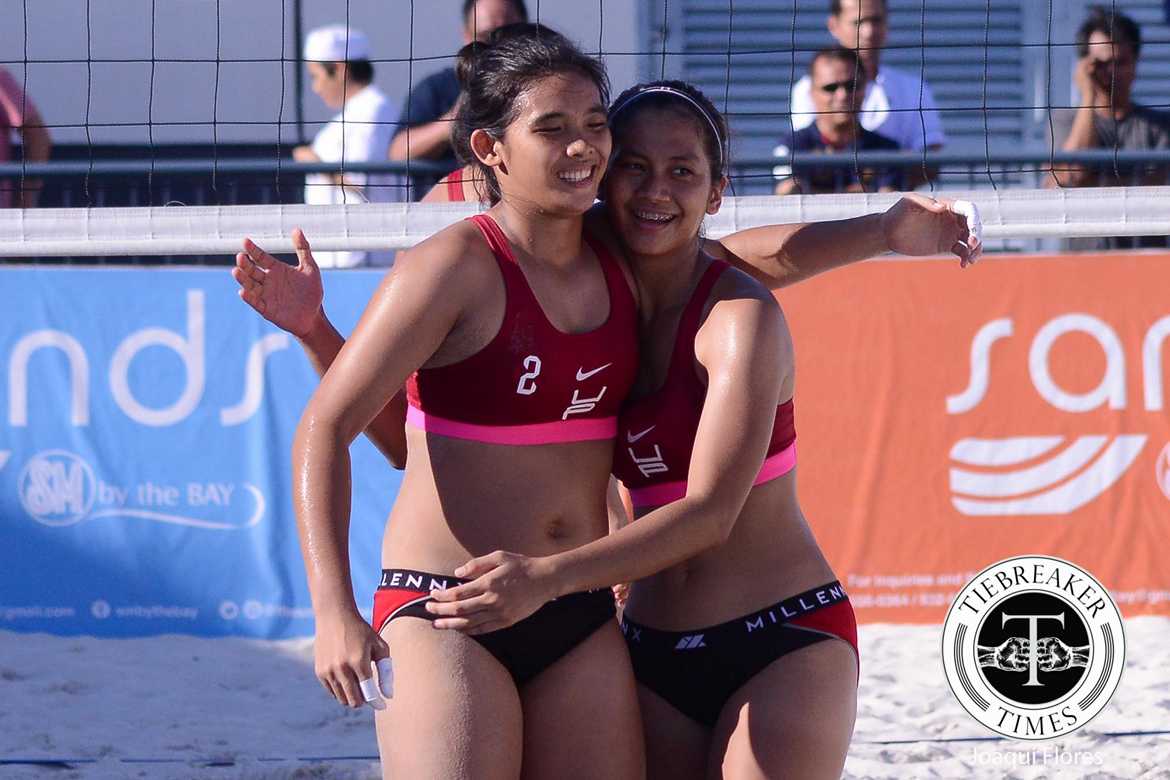 Season 77 champs University of Santo Tomas Tigresses displayed splendid form while upstart University of the Philippines Lady Maroons toppled favorites en route to perfect runs in Day One of the UAAP Season 79 Women’s Beach Volleyball Tournament at the Sands SM by the Bay at the SM Mall of Asia Grounds.

UST’s Cherry Rondina and Jem Gutierrez made quick work of their two meetings, blitzing the Ateneo de Manila University Lady Eagles pair of Michelle Morente and Kim Gequillana 21-10, 21-15 in the morning then thrashing Judith Abil and Angelica Dacaymat of the University of the East 21-12, 21-9.

One half of the Season 77 championship pair, Rondina displayed seamless chemistry with Gutierrez. Together, the ladies from España rained powerful hits on their opponents with ease.

UP paired beach veteran Arielle Estrañero with sophomore Diana Carlos to list a pair of impressive wins. The Lady Maroons shook off unforced errors and and early spurts from Adamson University’s Jema Galanza and Bernadette Flora for a 21-18, 21-16 win in the morning before scoring a decisive upset win over De La Salle’s Tin Tiamzon and Desiree Cheng 21-17, 21-15.

Pairing up for the first time, Estrañero and Carlos quickly found their footing on the sandcourt.

“I guess it’s just great playing with her. May relationship naman kami before since teammates kami sa indoor team so that helps a lot,” said third-year player Estrañero.

In the tournament’s opening match, the Lady Spikers outlasted FEU’s Bernadeth Pons and Kyla Atienza in the rematch of last season’s Finals 19-21, 21-15, 15-11. The Lady Tamaraws evened their record later in the afternoon with a dominant showing over the Lady Falcons 21-16, 21-13.

The tournament continues tomorrow, 8 am at the same venue