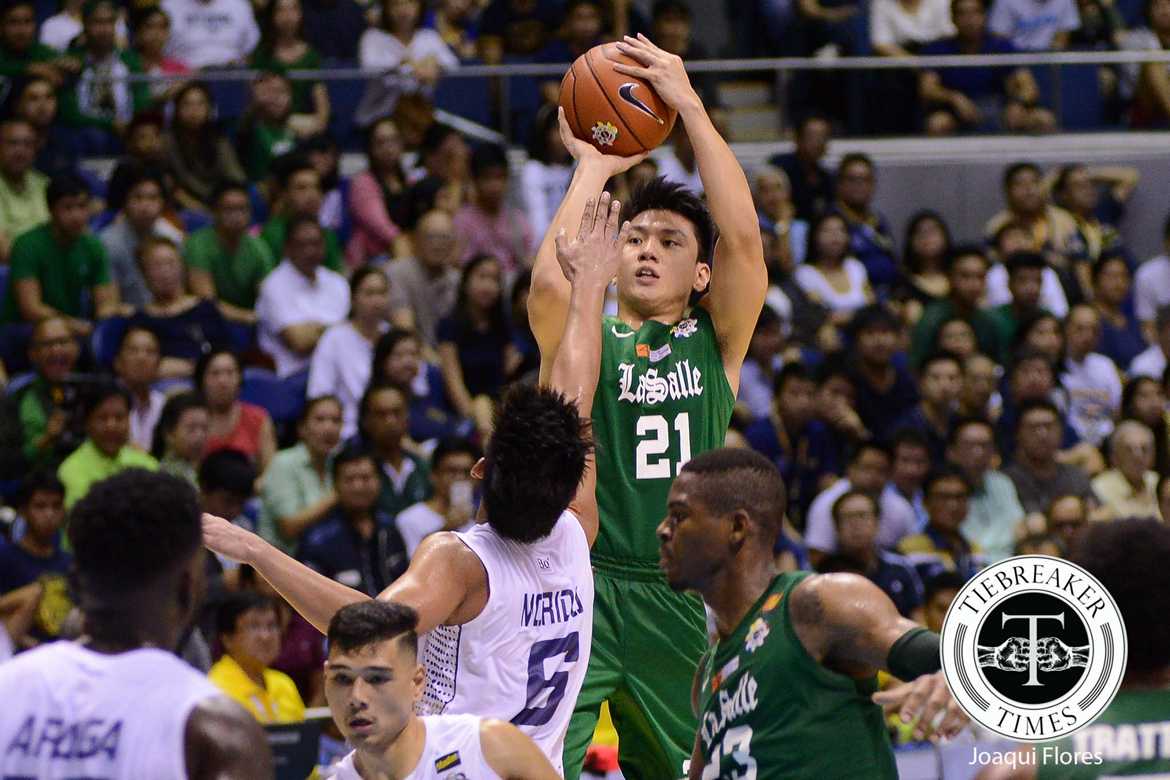 In what could be the Finals preview, the De La Salle University Green Archers needed to find that extra gear, doing so in the final frame as they bested the National University Bulldogs, 75-66, to stay as the only undefeated team in the UAAP Season 79 Men’s Basketball tournament, Sunday afternoon at the Smart-Araneta Coliseum in Quezon City.

“We knew going into the game that it was going down the wire. It was a tough game but we played inspired basketball,” first yead La Salle head coach Aldin Ayo said.

Coach Aldin Ayo and the Green Archers struggled against the shackling Bulldog defense early in the third canto, as Jjay Alejandro led a 9-2 NU rally to gain a 52-43 lead with 4:12 remaining.

Ayo, with all the tools he has in his disposal, utilized a line-up that featured three-point guards, Ricci Rivero, and Ben Mbala. He harnessed the youth and speed of line-up to combat the size that NU imposed. It was a gamble that paid off, as that lineup was able to force turnovers leading to easy buckets. The young Ricci Rivero then scored two straight buckets, including an elegant sidestep that led to a lay-up that cut the lead to two, 52-54, to enter the final frame.

“We just executed our defense and we were physically and mentally ready for the grind of the game,” Ayo added.

READ  Dave Ildefonso responds to Tab Baldwin: 'I think I made the right decision'

Behind Jeron Teng, who came off the bench for the second straight game, the Green Archers continouosly pushed the pedal and eventually gained a 62-59 lead with five minutes remaining in the game. The King Archer scored six straight buckets during that frame.

On the other end, the Bulldogs suddenly became gun-shy, with no one wanting to shoot. Moreover, turnovers plagued NU’s end game, resulting in baskets for Abu Tratter and Ricci Rivero. A long three by Kib Montalbo gave La Salle a 73-63 lead with 45 seconds remaining that proved to be enough for the still-perfect Archers.

In an uncharacteristic outing, the Bulldogs committed 29 turnovers that led to 33 points for the Green Archers. In addition, La Salle shot 47 percent from the field compared to 43 percent for National U.

For the Bulldogs, former Green Archer Matt Salem dropped his personal-high 15 points to go along with nine rebounds. Alejandro and Rev Diputado added 14 and 10 points respectively.

Matthew Aquino also played in his first game with NU as the Bulldogs were able to secure a TRO against his ineligibility. He finished the game with three points, three rebounds, and a block in just 14 minutes of game time.