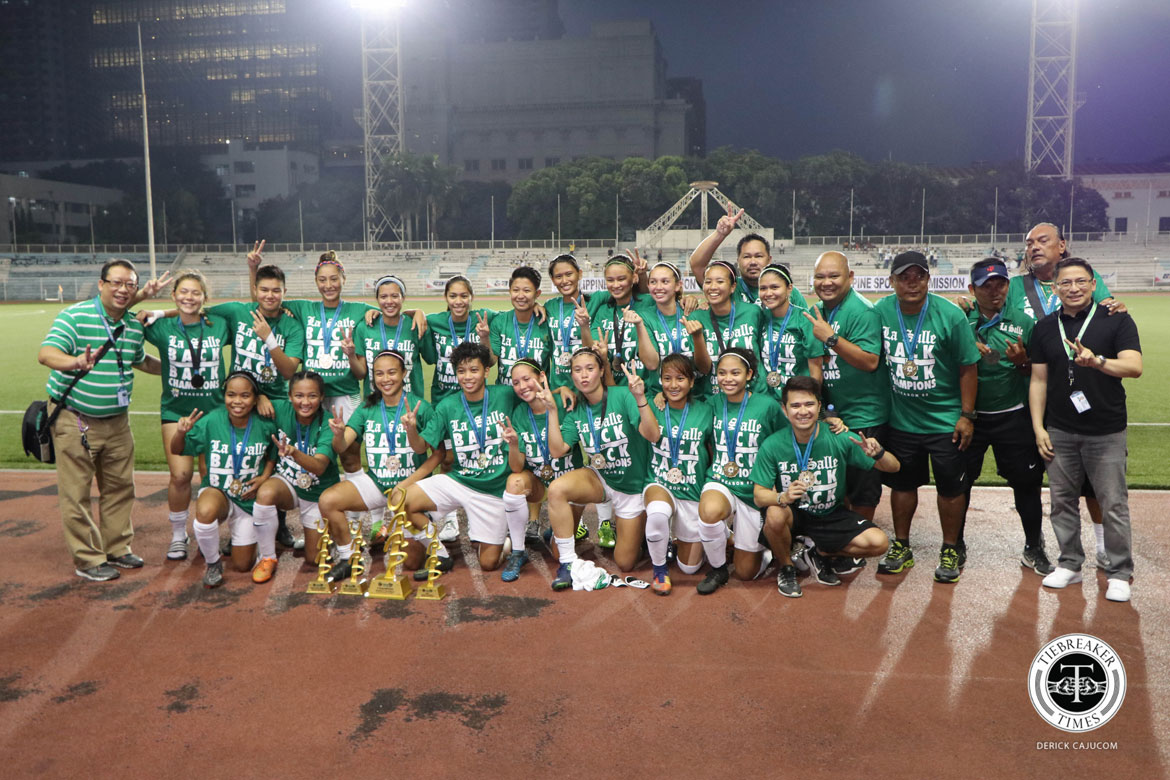 In a battle of two footballing forces, only one could emerge at the top of the food chain

It was the Taft school’s 10th UAAP Women’s Football crown. One woman stood above the rest, and her name was Kyla Inquig. The graduating player made sure she had a memorable last game in the UAAP by scoring two goals that sandwiched Shelah Cadag’s equaliser.

“What’s wonderful about (Inquig) is that she’s self-taught. She only learned real training when she got here (in DLSU). I’m really glad I got her. Very hard to replace her… Next year I’m gonna look for the next Kyla Inquig,” quipped La Salle mentor Hans-Peter Smit.

Just 12 minutes in, Inquig made the first of her goals, as her free kick attempt marvelously sailed above everyone before dipping right into the goal. It was a deserved advantage, as Hans Smit’s team looked more enterprising in the opening stages.

They’d had an opportunity to take the lead three minutes earlier courtesy of Kyra Dimaandal, whose attempt was deflected off the mark.

Not keen to let the early goal get the best of them, the Tigresses displayed their character by building momentum towards an equaliser. It didn’t go to waste, as the girls from España restored parity in the 22nd minute. Cadag was perfectly placed to receive Charisa Lemoran’s well-drilled pass before calmly picking her spot to beat Tashka Lacson in the La Salle goal.

From there, UST seized momentum and looked likely to take the lead before halftime. Lemoran and skipper Hazel Lustan had a few opportunities snuffed out by the DLSU back line. Lacson also demonstrated her skills between the sticks to make sure her team wouldn’t fall behind to the opponents they defeated for the title a year ago.

While on the back foot for most of the closing stages of the first half, the Lady Archers actually had the closest chance of breaking the deadlock. In what was a rare occasion after going in front, DLSU were only denied by a few centimeters when Inquig’s 26th minute attempt struck the corner of the frame.

Come halftime, nothing separated the two teams. After a lengthy break, both teams picked up where they left off. Level at 1-1, it was anyone’s game, with the scorer of the third goal perhaps the deserved victors.

Neither team could say they dominated the game, with both teams having the ball regularly. However, the advantage seemed to belong with UST. Coach Aging Rubio’s wards looked more promising whenever they held the ball. Their potent frontline continually kept Lacson and her colleagues at the back on their toes, while UST’s Nicole Reyes and the UST defense had about half the workload of their counterparts in green and white. Not able to capitalize on their advantage, the Tigresses were left wondering what might have been.

Approaching full time, only one woman could decide such encounter with both brute force and flamboyant skill. Unsurprisingly, Inquig punted a long shot past the wrong-sided Reyes. In doing so, the La Salle crowd erupted in joy, knowing they were 11 minutes away from keeping their crown.

Taking a lead is one thing, and keeping it is another. Holding their advantage as time winded down, La Salle weathered the Tigresses’ storming spell in added time. Cadag attempted to claim her share of the spotlight, but Lacson denied the UST winger with a save that reflected the title’s prolonged stay in Taft Avenue.

“We were the underdogs. The best way was to play with our heads. And it worked,” furthered the veteran mentor. “The girls showed true character on playing in pain. They have been in pain for so long. But they wanted to get this game.“